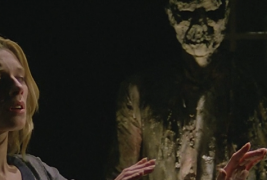 Lucio Fulci has never hidden his admiration for Antonin Artaud, the French Surrealist who first articulated the idea of the “Theatre of Cruelty.” According to his 1938 book The Theatre and Its Double, Artaud envisioned the Theatre of Cruelty as a decidedly nonlinear form of performance art that eschewed such typically Western niceties as a cohesive plot, clear narrative, and comprehensible dialog. It its stead, Artaud’s plays would seek to cultivate “the notion of a kind of unique language half-way between gesture and thought.” In practice, Theatre of Cruelty productions exorcise rational language in favor of “cruel” images that try to touch the collective sub-consciousness of the audience in the name of creating the “poetic state”:

Admittedly or not, conscious or unconscious, the poetic state, a transcendent experience of life, is what the public is fundamentally seeking through love, crime, drugs, war, or insurrection.

Artaud found his own “poetic state” in a group of Balinese dancers at the 1931 Paris Colonial Exhibit. For him, these physically and emotionally violent movements provided a counterpoint to the stifling and well-mannered melodramas of Europe. The Theatre of Cruelty was revolutionary and radical, and unlike the gory Grand Guignol plays, which poured on sadism, violence, and nihilism without a guiding philosophy, the Theatre of Cruelty did earnestly believe in its own capability to turn the Western stage on its head.

Fulci’s films were never meant to be revolutionary, and one could argue that they are only “cruel” to the people who watch them. Without question, Fulci’s films treat plots and scripts as mere frameworks and suggestions. For the most part, any given Fulci narrative can be summarized in a sentence or two. Take The Beyond as an example. The second film in the unofficial “Gates of Hell” trilogy is nominally about a woman from New York named Liza Merril (played by Catriona MacColl, who stars in all three “Gates of Hell” films) who purchases the ominously named Seven Doors Hotel in New Orleans. The hotel is not only in abject disrepair, but its history is beyond disreputable. Decades earlier, in 1927, a local lynch mob brutally attacked and crucified the painter Schweick (played by Antoine Saint-John), whom they correctly believed to be a warlock with a grand design towards opening one of the seven doorways to Hell. Coincidentally, the hotel, much like the town of Dunwich in The City of the Living Dead, sits atop of one of these doorways, and when Liza tries to renovate the hotel, she unwittingly turns the knob and pushes the door open.

From this kernel, Fulci makes a lot of gooey popcorn. For most of the film’s running time, The Beyond is a sanguinary orchestra without a lot of undue logic. Each kill is treated like a film in itself, from the agonizingly slow death of Liza’s friend Martin Avery (played by Michele Mirabella), which involves hungry tarantulas, to Emily, a blind survivor from the 1927 tragedy whose soul is stuck in limbo, and her death via canine mastication. These aren’t the ugliest kills by any means, but they are some of the most “poetic.”

The Beyond is a very ugly film, but it’s also a lush portrayal told in a string of seemingly unrelated incidents. Each death is merely associated with an earlier one (after Joe the plumber [played by Giovanni de Nava] is mauled by a resurrected Schweik, his wife falls victim to an undead acid attack at the hospital while fitting Joe’s body for burial), and some characters come out of nowhere just to die gruesome deaths. The Beyond is cruel, indeed.

The film is also, at a certain level, a failure. While much of the film accomplishes Fulci’s goal of creating a nightmare-like atmosphere founded upon recognizably malevolent motifs (the resurrection of past crimes, the occult, and simplistic references to H.P. Lovecraft’s mythology such as the Book of Eibon), the film ends like a video game or a pale imitation of Romero’s Dawn of the Dead (which was by then already familiar territory for Fulci). 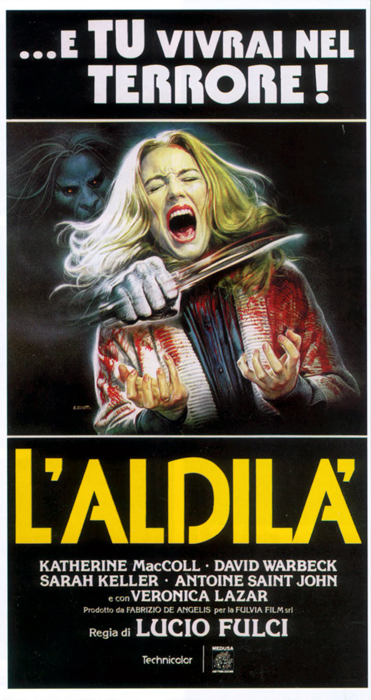 In an effort to try and capitalize on the zombie film craze that was sweeping through North America and Europe, Fulci’s German distributors turned what was originally a surreal haunted house story into a perplexing zombie film that only manages to lift the fog of incoherence once Liza and the handsome Dr. John McCabe (played by David Warbeck) find themselves trapped in a hospital with the re-animated dead. At this point, the film goes mainstream and apes earlier zombie flicks like The Living Dead at Manchester Morgue (which has a similar zombie-versus-humans fight in a hospital), Night of the Living Dead, and Dawn of the Dead. Armed with a revolver, the good doctor and Liza run from room to room in order to escape the slowly shuffling zombies. Amazingly, Dr. McCabe never seems to realize that a headshot is the only way to lay a zombie out, and although some of his shots ring true some of the time, he still looks puzzled when Schweik and others won’t stop moving after four or five gut shots.

After managing to escape to the hospital’s basement, Dr. McCabe and Liza realize that in actuality they have returned to the hotel’s basement, which had previously been the resting place of Schweik and the seat of the film’s first horrors. Following an illuminated trail, McCabe and Liza ultimately end up in a windy between-space that mirrors the hoary painting that Schweik was working on during the night of his death. Many fans interpret this realm as a type of Purgatory, and when Dr. McCabe and Liza go blind in the same manner as Emily, it’s often interpreted as a sign that now they too are in spiritual limbo.

Of course, with Fulci, interpretations are truly like assholes. Fulci was never one to give many hints, for such a thing runs counter to his Theatre of Cruelty mindset. Remember: plot is nothing, while images are everything. Besides its final battle, which feels overly commercial and obscene in the same way as having a Starbucks inside of a medieval torture exhibit, The Beyond is a Dionysian horror movie drunk on its own savagery. That’s why it’s usually considered Fulci’s best – The Beyond is a bacchanalia that is meant to offend and push away the uninitiated. Thus, the second “Gates of Hell” film is a true cult piece, even despite its many missteps. Again, it’s best to judge Fulci on his images and the interplay between them and Fabrio Frizzi’s music, for by all other standards he’s an abject failure. And unlike City of the Living Dead, where the music is so obviously better than the imagery, The Beyond gets closer to a happy parity between Fulci’s shocking visuals and Frizzi’s beautiful instrumentals.

One thought on “Gates of Hell Part II: Fulci’s The Beyond”