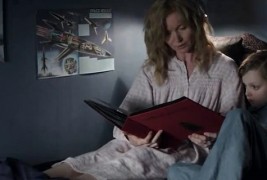 Happy New Year, you sickos! A handful of our contributors offered up their favorite bits of horror media from the past year.  Check it out, Horror Fans….

Justin Hamelin: I will be the first to admit, I fell off of my horror game quite a bit in 2014.  Not only did I miss out on a handful of films I still really want to see (The Purge: Anarchy, As Above, so Below, The Quite Ones, Tusk, Sacrament, Life After Beth) but I also have yet to read the two works Stephen King presented to us this year, Mr. Mercedes and Revival.  By the time you read this, if my family loves me at all, I will have obtained both novels on or around December 25th.

However, even with so many screw-ups in my Year in Horror, there was still plenty I did see that satiated my horror appetite.

The heaviest hitting horror of the year goes to, hands down, The Walking Dead.  This last twelve months of Grimes & Co. may very well have been the deepest and darkest ever.  From surviving the prison’s destruction to Rick tearing out another man’s throat and leading the massacre of the “Terminites” in Father Gabriel’s church, with Beth’s heartbreaking death capping off the year, this zombie apocalypse isn’t ending anytime soon and fans cannot get enough.

American Horror Story brought us a Coven and a Freak Show, with the latter beginning to show some of the show’s weaknesses under the bright lights of the big top.  The series is still a fun watch, but there hasn’t been really anything to sink your teeth into for quite some time.  Dandy, the pretty boy-turned-serial killer, however, may very well go down as one of the best horror television characters of all time.

We also saw NBC’s Dracula meet its untimely demise when channel execs decided Jonathan Rhys Meyers’ (allegedly) unstable personal life was too much of a risk for the series to move forward after its inaugural season.  I really liked this show and thought it had a very bright future.

As far as films that I saw and loved in 2014, The Babadook and Deliver us from Evil take the creepy cake.  The Babadook instantly cracked my Top 10 Horror Films list and DUFE was a genuinely creepy exorcism film.  Horns, Oculus and Dracula: Untold all had their moments, too.

All in all, it was a great year and I look forward to catching up on what I missed while also digging in deep to what 2015 has to offer. 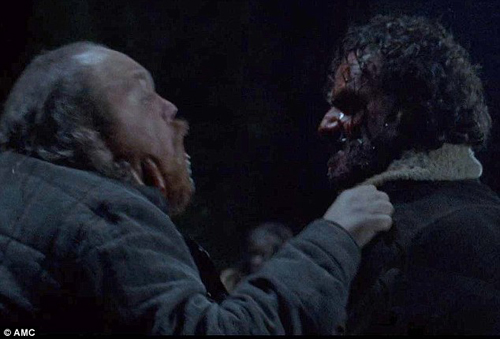 Benjamin Welton: When I got the email from our esteemed editor concerning my favorite bit of horror from 2014, I initially flew into a panic. My viewing and reading habits aren’t exactly current, and it’s a secular miracle when I manage to make it to a movie theater. For all intents and purposes, I’m a cultural recluse and I sort of like it that way.

That said, the Haunted Horror reprints by Yoe Comics have been exceptional, Ed Brubaker and Sean Phillips’s Fatale was amazing, and Oculus was an engaging flick and much better than would otherwise be expected from WWE Studios. But when it comes to my favorite thing in horror from 2014, my answer has to be The Babadook. A tension-fueled look at just how terrifying unresolved grief can be, The Babadook was by far the year’s best horror film. At no point was I comfortable, and although I incorrectly called the film “The Babadookie” while I was under the influence of too many hours spent watching No Holds Barred, I never once managed to crack a smile during this distressingly taut spine-chiller. Oh, and what the filmmakers did with the Georges Méliès footage is worth sitting through the entire movie. 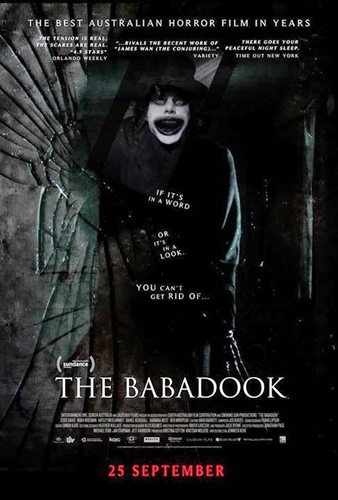 Tonjia Atomic: 2014 was a very good year for indie horror. I saw more great indie horror that I enjoyed this year than any other. It wasn’t easy to pick favorites because there were so many gems. My list is the top 5 of my personal favorites of 2014.

5.  The Babadook by Jennifer Kent. I personally found it more emotional than scary. However, this film about a single mother dealing with the loss of her husband and raising their child has some very tense and creepy moments. This multi-layered sleeper hit explores the themes of pain and loss in a way that I’ve never seen. One of the most interesting things about the film is that the characters are sympathetic at times and repulsive at others. Essie Davis and Noah Wiseman as Mother and Son pull off this complex feat with seemingly no effort.

4.  Snake with A Human Tail by Spencer Gray. This short film about a child-molesting priest and his former victim is powerfully tragic. It shows the long-term repercussions of abuse. Marv Blauvelt, Billy Blair, and Sherri Davis give authentic performances that really draw the viewer into the story. The subject is a difficult one for some to enjoy, however, it is an important one.

2.  Coyote by Trevor Juenger. Coyote plays like stream-of-consciousness writing. It is similar in structure to Cronenberg’s Naked Lunch. It explores the many layers of the mind of a man who is disconnecting with reality and society and the violence that results. It is a poetic and psychologically honest look at chilling subjects such as isolation, self-hatred, and mass-murder. Bill Oberst Jr. stars and is the heart and soul of the film. I can’t imagine anyone else in this role. This film was painful for me to watch and yet I loved it.

1.  Circus of the Dead by Bill Pon. Circus of the Dead is the story of violent clowns who only live to torture and kill. I probably would not recommend this film to most people. The film is violent, nihilistic, disgusting, and offensive. It is also quite beautiful. The film is not only technically made well it is also artistically eloquent. It is richly textured and gives the viewer the feeling that the world of the film is real and full. Bill Oberst Jr. plays the lead role of Papa Corn and is delightfully perverse. He’s charming and nasty. Parrish Randall is sympathetic as poor Donald who is tortured throughout a hellish night with the clowns. Ryan Clapp and Mike Williams are deliciously evil. Tiffani Fest has a small role with a big impact. And my favorite, Rusty Edwards is the chain-smoking nonchalant Mister Blister. Circus of the Dead: the most disgusting film that I’ve ever loved. 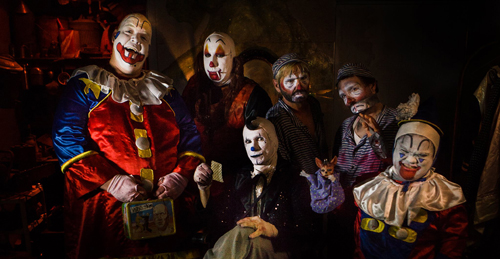 M.R. Gott:  Jonathan Glazer’s Under the Skin was a minimalistic and entrancing film.  This art house/genre hybrid would be best described as a truly introspective reboot of Species, despite being based on a novel by Michael Faber.   Aside from featuring some of the most inventive and memorable kill sequences in the last decade, Scarlett Johansson’s nameless character was both incredibly sympathetic and frightening.  The audience of Under the Skin does not know why her character is seducing and leading lonely men to what seems to be their deaths, yet she is driven to do so without any sense of satisfaction or malice in the killings.

Through Jonathan Glazer’s direction the familiar trappings of our world are seen through the eyes of the female lead and become a terrifying new place.  Aside from the inventive nature of the kills on display, they take a strong emotional toll, as the men being dispatched are not the typical slasher movie fodder.  None deserve what is about to happen to them, and yet it happens nonetheless.  Despite the sexual allure of Johansson’s character, the men meet horrific ends through the emotional bond she forms with them.   Even as the predator of this landscape she retains a vulnerability, and when she’s danger the audience roots for her survival because she has seduced us as well. 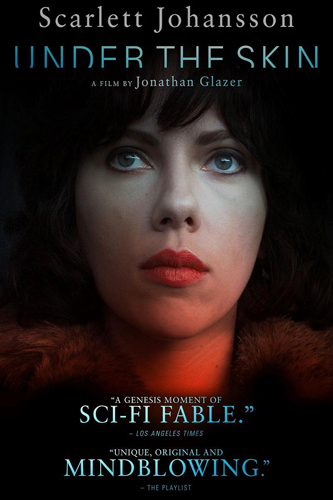 Robert Hibbs:  The most horrifying event I experienced in 2014 was during the ShockaCon Horror Convention in Charleston, WV. The con itself wasn’t too bad. The horror fans in Charleston were fun and friendly, but my interview with Fred “The Hammer” Williamson was so bad that it cursed the videotape it was recorded on. My cameraman and I attempted to destroy the tape several times, but it kept returning. On one such occasion of the tape’s mysterious reappearance, my cameraman made the mistake of showing the tape to a friend and the interview was so horrific that his friend’s guts exploded from his stomach and their brain caught on fire. 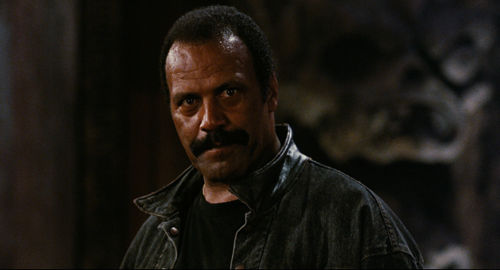 Jason Thorson: This year featured a large amount of personal upheaval for me and, as such, I didn’t consume nearly the amount of horror media I usually do.  However, I was able to see, read, and watch everything I needed to so that Ravenous Monster ran smoothly and I was able to keep informed about what was happening in our deranged corner of pop culture by virtue of working on content by our fantastic contributors, getting it ready to publish.

I second Mr. Hamelin in that, for my money, The Walking Dead in 2014 was the biggest bang for the buck featuring the most daring and dark storytelling yet in this horror series that’s transcended our niche of the television market in huge ways.  I enjoyed Mr. Mercedes by Stephen King and to a lesser extent Revival, neither one of which is horror per se.  I also enjoyed Plague World: An Ashley Parker Novel, the final chapter of author Dana Fredsti’s outstanding and irreverent zombie series.  And I’d be remiss if I didn’t echo Ms. Atomic’s perspective on the Wisconsin-made horror anthology Hole in the Wall.  Truth be told, I was able to work with many of the folks involved in this sick flick on a project of my own this year and I consider them my friends, so you can certainly call it bias if you’d like.  I can’t blame you.  But Hole in the Wall is as weird, tasteless, disturbing, and unique as ANYTHING you’ve seen and I’m proud that it vomited forth from my neck of the woods. 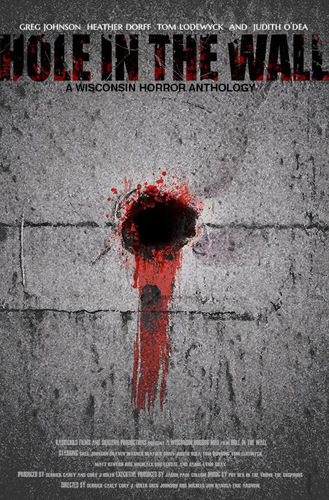 Finally, I want to thank all of our outstanding contributors who’ve worked hard this past year to provide you all with topnotch content, and I’d like to thank you all for reading.  We appreciate it, dearly.  Here’s to an even bloodier 2015!