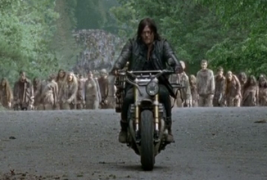 Although much has been made about the fact that ratings have slipped at points during the latest season of AMC’s flagship drama The Walking Dead, the first eight episodes of its sixth season continue to be the monstrous pop-cultural phenomenon that no one saw coming back in 2010.

Season 6 begins with our heroes still holing up in Alexandria, the idyllic suburban oasis walled off from the apocalyptic chaos outside and full of residents that haven’t yet been hardened by the cruel conditions of the walker plague rampaging across the globe.

When Rick (Andrew Lincoln) and Morgan (Lennie James) discover a quarry near Alexandria that’s been functioning as a huge walker trap, Rick initiates a plan to lead the massive zombie herd trapped at the bottom away from Alexandria before the walkers find a way out and overwhelm the compound.  Unfortunately, Rick’s intuition proves correct earlier than expected when a semi-truck that had been perilously perched in front of the quarry exit breaks free and falls in, clearing the way for the walkers’ mass migration.

Our heroes hastily begin to execute a plan to lead the shambling dead at least 20 miles away from Alexandria—a plan that’s part military operation, part ranch management—utilizing precise, efficient teamwork.  However, while our heroes are zombie wrangling outside the walls, Alexandria is raided by the Wolves—a cult of violent survivors.  It’s a bloodbath that claims the lives of Alexandrians and Wolves alike, and in the chaos a large truck crashes into the wall, triggering the truck’s air horn and drawing the massive walker herd back toward our heroes’ compromised home.

Now everyone is in danger.

While Rick, Morgan, Michonne (Danai Gurira), and Carol (Melissa McBride) attempt to defend and fortify Alexandria, others like Daryl (Norman Reedus), Glenn (Steven Yeun), Abraham (Michael Cudlitz), and Sasha (Sonequa Martin-Green) are isolated from the others, having been  trapped at varying distances outside the walls while leading the walkers away.  As Rick works with a crew to shore up Alexandria’s defenses against the ravenous zombie horde pounding at the vulnerable barriers, those caught outside fight for their lives as they try to make it back home.

This scenario culminates in a midseason finale that neither resolves much of anything, nor hangs us from the proverbial cliff in the way we’ve all grown accustomed to. 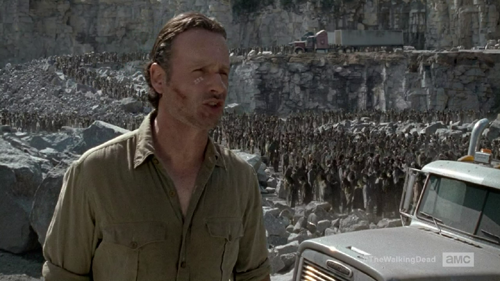 Season 6 of The Walking Dead takes a different tact than seasons past as it focuses almost entirely on this one specific situation—our heroes ridding themselves of the walkers from the quarry—and all that it entails.  The larger, less tangible issues the series has played with over the years—the fight for the soul of their group, struggling to retain some semblance of humanity, and what one loses in becoming a competent survivor—are no longer front and center.  Instead, the scope has been narrowed and the forces of antagonism reside on the surface and are defined in no uncertain terms.

Which of these approaches you prefer may just be a matter of taste, but, for this reviewer, the stakes feel a little lower and the narrative progress a little slower when those aforementioned timeless, existential issues are de-emphasized if not taken entirely off the table.  The show remains must-see television—it’s still well executed in all the ways it’s proven itself to be—but the story material so far this season lacks the depth and forward momentum we’re used to.

In an apparent concession to this fact, we’ve been given a few sidebars to the main plot such as “Here’s not Here,” an entire hour-and-a-half long episode depicting Morgan’s moral plight since season one.  While this episode is nothing but existentialism manifesting as well-executed cinematic storytelling, it’s also completely divorced from the simplistic seasonal plot and it comes on the heels of a pivotal cliffhanger, the payoff to which we don’t receive until two episodes later.  “Here’s not Here” is a good episode, but its placement within the semi-season is one of the things that damages the pace and momentum of the main plot.

As expected, the cast’s performances are above average with Steven Yeun’s portrayal of Glenn taking top honors so far this season.  Glenn arguably has the most at stake as he’s been transformed from an innocent kid and ancillary character to a husband, expectant father, and core member of the group.  His arc has been profound and so far this season Yeun’s portrayal has made the most of his character’s subtext by conveying that information with deft, subtle acting chops.

The technical elements of the production are also on point.  The score during these eight episodes is particularly effective as it continues to evoke the vibe from an era when gory zombie action was new.  Now, the pulsing, anxiety-inducing synth-ish accompaniment seems less like homage and more like the confident, precise use of music to elicit all the right emotional beats.  And, speaking of gory zombie action, I’d be remiss if I didn’t mention that the make-up and visual effects are delightfully disgusting and creative.  None of this should come as a surprise.

Where this season leaves a bit to be desired is, again, in the way it seems stuck on a treadmill.  The sense that not much is happening is due at least in part to the fact that each season is split into two halves, separated by a two-and-a-half-month long hiatus.  As such, it’s difficult not to perceive these semi-seasons as whole seasons unto themselves.  While it’s a safe bet that several things are being planted with the intent of having those things pay off when season 6 returns on Valentine’s Day 2016, such a long wait makes watching eight episodes of setup that much more challenging.

Even so, The Walking Dead season 6 continues to achieve a level of quality that’s pretty remarkable for a television series about the zombie apocalypse.  Here’s hoping the back half of the season makes us forget about the extra patience that’s been required thus far.  Until then, I’m giving it a respectable B-. 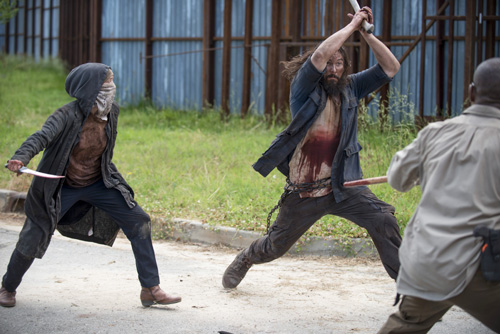