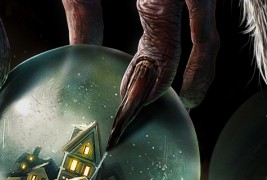 We’re all adults here; can we finally admit that the holidays suck? The stretch of winter darkness from Black Friday to Boxing Day is an unrelenting slog, waist-deep in schmaltz and as warm and tender as day-old vomit.  If I’ve heard one slow, sappy version of “Jingle Bell Rock,” I’ve heard them all.  “Up on the Housetop” doesn’t get any better when the Jackson Five sings it, and “Blue Christmas” was only done well by Johnny Cash.  And lest you think I’m just targeting Christmas, I can tell you that there are much, much better Chanukkah songs than “Dreidl Dreidl Dreidl,” and that the Eid songs they play in Egyptian department stores show that Muslims can crank out obnoxious, soulless holiday music right alongside their Jewish and Christian counterparts.  The animating spirit of the season isn’t joy, but guilt: about how much you spend on presents, about how little you actually want to spend time with your blood relatives, about your rising credit card bills come January.

Then, like a rotten cherry atop a bowlful of putrid jelly, comes the annual false flag operation we call the War on Christmas. Every year, the same gaggle of assholes gets itself into a tinselly slather because some department store in Donkeyfuck, Ohio told its employees to say, “Happy holidays” rather than “Merry Christmas.”  Every year I keep hoping we’ve reached the end of this silly and paranoid delusion, but hark—this year Starbucks removed its snowflakes and fir branches from its seasonal cups, and puffy brovangelist Josh Feuerstein is mad as hecky-darn about it.  While I try to think of a way to tactfully point out that “Josh Feuerstein” is an improbably Jewish name for somebody looking to transform himself into a pro-Christmas culture warrior, I’d like to call your attention to the fact that snow does not regularly fall in the Levant and Christmas trees are probably pagan in origin.

Pagan? Oh yeah.  Don’t tell Bill O’Reilly, but you don’t have to dig too deeply into this season to see that Christmas is the greatest compromise between Christianity and paganism ever.  Santa Claus is a hastily-Christianized Odin, only watered down into a jolly fat man with eight reindeer during the 19th century.  Mistletoe was sacramental for the heathen Gauls.  And then there’s the Krampus, subject of Michael Dougherty’s new holiday-themed horror movie of the same name.

The Krampus, according to German folklore, is Santa’s evil helper: a horned, hoofed monster that either brought coal to naughty children or kidnapped them in a giant sack. In Krampus, he comes to punish a suburban Pennsylvania family that’s lost the Christmas spirit.  Tom and Sara (Adam Scott and Toni Collette) are dreading the prospect of once again hosting Sara’s feckless sister Linda (Allison Tolman) and her obnoxious, Tea Partying husband, Howard (David Koechner) for another stressful Christmas.  But when their son Max (Emjay Anthony) shreds his letter to Santa in disgust, it draws the attention of an older and far more sinister spirit than Kris Kringle.  As an impenetrable blizzard descends on the neighborhood, it becomes clear that the resulting power outage is the least of the family’s concerns.

Krampus is a funny, honest, scary, heartwarming film—and one that probably comes closer to capturing the real spirit of Christmas than most any holiday film made in the last ten years (Elf may be the exception).  The performances are solid, and unlike many films, seasonal and non-, the characters have an unexpected depth.  There are no caricatures here—even Koechner’s Howard is more a frightened man, concerned about the safety of his children, than a Trumpesque conservative cartoon.  Scott and Collette, who proved their chops in Parks & Recreation and The United States of Tara, respectively, handle the comedy and the horror in the film with equal aplomb.  The creatures are brilliant, from the Krampus himself down to his henchmen—masked elves and evil toys done with far more originality than I expected (my favorite was a python-like jack-in-the-box). Krampus should be a solid A+, but it missteps badly on two counts.

The first is the usage of Omi, Tom’s German mother who has a special bond with Max. Portrayed fantastically by Krista Stadler, Omi functions as the voice of a different Christmas than the mass-marketed orgy that the film so brilliantly skewers in its first act.  A believer in the season’s true spirit of sacrifice and selflessness, Omi is the only one to realize that the Krampus has come to punish the family, and the only one who seemingly knows how to keep him at bay.  Unbelievably, nobody listens to her.  Even when they’re fighting elves and animate toys, this Krampus stuff is still fairy tale bullshit, which beggars belief.

The second is that–

–we reach the ending only to learn that there is no way to defeat the Krampus. He comes for his own, and no amount of virtue or sacrifice can prevent him from doing so.  This is frustrating not just because it’s mitigates the drama, but also because the rest of the film was well-done enough that if Dougherty decided to give us some Christmas magic, I would have been okay with it. Krampus is horror, but it’s a horror closer to Pan’s Labyrinth than a straight genre title, fundamentally a fairy tale about childhood, fantasy, magic, and innocence.  If the Krampus is drawn by selfishness, then when the adults step up and risk their lives defending their children, he should be defeated, shouldn’t he?  Instead, the whole family is sentenced to a what we can only assume is eternal Krampusdom by way of a very creaky dream sequence transition, and as a result—

–the ending is hugely disappointing. It’s harsh, but I have to take Krampus down to a B-.

I don’t hate this season because it’s religious. I don’t hate Christians wishing me a sincere merry Christmas or calling Christmas trees by their rightful name.  I hate the venality, the cheap substitution of sentiment for sacredness and platitudes for honesty.  Whatever its flaws, Krampus doesn’t fall into that trap.  Go see it.  We need more movies with as much heart as this one. 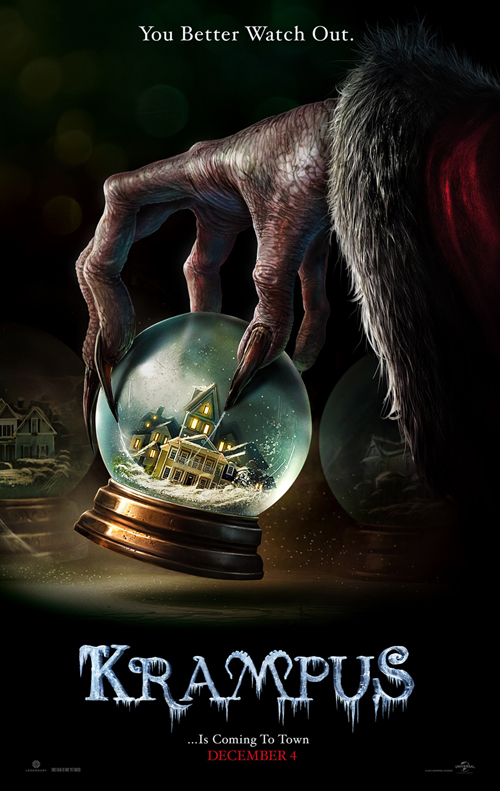