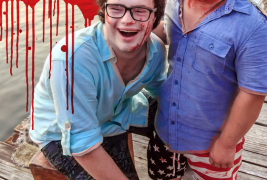 With everything that’s been going on in the world, it’s been pretty hard to find the good that’s still in it. Well, that’s why I’m here! I’m hoping to lift your spirit by telling you about a refreshing, feel-good documentary called Sam & Mattie Make A Zombie Movie. This documentary follows two hardcore horror fans in their journey to make a badass zombie flick. Blood, sweat, and tears are shed during the movie-making process, but important life lessons are also learned. Sam & Mattie Make A Zombie Movie will absolutely make you feel better about the world as you watch these two young men overcome their challenges in order to make their wildest dreams come true.

The first half of this documentary is essentially a behind-the-scenes type of situation. We’re introduced to Sam Suchmann and Mattie Zufelt, who are best friends and big fans of horror, particularly zombies. Both Sam and Mattie have Down’s Syndrome, but they don’t let it get it in the way of their determination in doing the things they set their sights on doing. The one big thing they want to do is create a blood-and-boobs filled zombie movie called, Spring Break Zombie Massacre.  We join the boys as their creative juices flow while they work toward the goal of making their masterpiece a reality. Sam and Mattie approach each aspect of the filmmaking process with a high level of excitement that has the viewers rooting for them every step of the way. Although their optimism is challenged as some of their biggest ideas are shot down due to budget cuts or casting and scripting changes, the boys never lose faith in reaching their goals. It’s also quite inspiring to see how involved and supportive the community becomes in helping Sam and Mattie stick to their guns to reach the finish line. 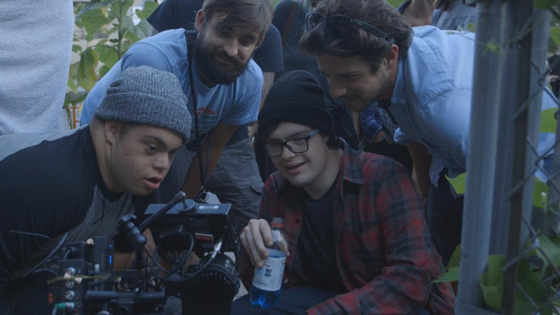 In the second half of the documentary, we’re treated to the screening of the full-length, 45-minute-long feature of Spring Break Zombie Massacre, which is a B-movie lover’s heaven. Full of bad acting and a ridiculous storyline, Spring Break Zombie Massacre has plenty of well-done gore, thanks to ravenous zombies, stupid teenagers and a pissing Satan!! The film is pretty much exactly what Sam and Mattie set out to make and to see it in all its splendor is pretty damn cool. Oh, and just a heads up, the movie is interrupted at times by commentary informing you of why certain scenes were made a certain way or to relay a behind the scenes story regarding the making of the scene, but these interruptions really don’t hinder the watching of the film at all. After the film is screened, the real point of the documentary is revealed, and it’ll probably make even the toughest critic out there tear up.

Sam & Mattie Make A Zombie Movie is a heartwarming story of two best friends who never see their disability as being a disability. This documentary is completely inspirational and shows what true friendship is. If you want to laugh, cry, and just have a great time watching a highly entertaining and refreshingly real story, you can currently find Sam & Mattie Make A Zombie Movie streaming on several platforms such as iTunes and Prime Video.