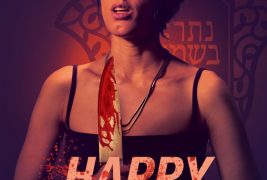 In case my capsule description was opaque, this is a movie about assholes. There is no likeable character—or even likable asshole—who counterbalances the unpleasantness of watching this Havdalah from hell. Good movies about assholes show you a little bit of their humanity, but Happy Times goes out of its way to do the opposite, whether it be Yossi’s boasting, Ilan’s sliminess, Sigal’s smarmy phoniness, Michael’s drunken bullying, or Maor’s pervy antics. While this is billed as a horror-comedy, there’s nothing really funny or scary about it. It’s just assholes all the way down, and the cast plays them to the hilt.

Proper pacing is vital to a story like Happy Times, and in this too Mayer fails. Ideally, we would learn little by little that all is not what it seems in this group of friends, and the tension would build up to a bloody climax. Instead, we’ve got shouting matches and fistfights within the first half-hour. It’s uncomfortable without being dramatically interesting, a schlocky version of Knives Out completely lacking in that film’s charm and humor.

But then, around the 50:00 mark, just when I was ready to shut off Happy Times, the film becomes something like the freewheeling gore-splattered social satire it could have been in the hands of a better director and watching all its detestable characters get fed one by one through this kosher meat-grinder becomes a bit more satisfying. Motivations remain shaky and a couple Chekhov’s guns go unfired, but there’s a schadenfreude to watching all these loathsome people get slaughtered that carries an undeniable gratuitous appeal. It never becomes excessive or outrageous enough to really live up to the possibilities inherent in its premise, but at least Mayer has the rudimentary storytelling instinct to realize that if we have to spend almost an hour putting up with these people, he owes it to us to kill all of them with enough arterial spray to make up for lost time.

I’m sure somebody will accuse this Jewish family argument on PCP of being “problematic.” Whatever gets you the retweets, I guess. Whether Jews can be antisemitic or not is another debate for another day, but I’ll find Mayer “not guilty” on that count as there’s nothing distinctively Jewish about these people. They’re just assholes of a type that’s boringly and infuriatingly universal, like the obnoxious kids at the beginning of a slasher movie, if the movie never had a slasher for you to cheer for. Cinema has plenty of riveting scumbags to spend your time with. Go watch them and spare yourself Michael Mayer’s not-so-Happy Times.