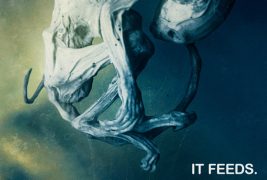 Greetings, readers! Today, I’m here to tell you a little bit about Chilean writer/director Patricio Valladares’s Embryo, a sci-fi/horror anthology about aliens that like to get their freak on with unsuspecting human hosts. As alluring as that may sound, Embryo comes off more like a really bad one-night stand. Going in, it seems like it might be a fun time, but it just winds up being messy and not very satisfying. This film was initially meant to be a pilot for a television show, but because of the pandemic being what it is, the filmmakers decided to release the material they’d already shot as a feature film. As a result, the story is muddled and all over the place, but I guess they did what they felt was best.

Essentially, the main story of Embryo follows a couple named Evelyn (Romina Perazzo) and Kevin (Domingo Guzman) who decide to have a romantic camping trip in an area called Snowdevil Mountain. This mountain is kind of like Chile’s version of Area 51 because it’s apparently known for attracting a lot of activity from those crazy aliens from outer space. That being said, the story of the couple kicks off after a sweet marriage proposal to Evelyn by Kevin. Things seem to go okay until Evelyn decides to investigate a strange noise in the woods…in the middle of the night…wearing only a skimpy shirt and her undies.

Naturally, she attracts unwanted attention from something not human, and we’re treated to an attack sequence featuring a seizure-inducing series of blurry lights and shapes. Eventually, Kevin notices that Evelyn has taken off and spends a bunch of time hollering and wandering around the area looking for her. He finally finds her discarded on the ground in the woods and covered in a white goo that looks like an obvious bukkake event took place. Kevin is undoubtedly concerned for Evelyn and decides to take her to a local doctor to get her checked out to make sure everything is okay.

Naturally, the visit starts out normally enough, but it doesn’t stay that way. We see that something’s growing inside of Evelyn and not only is it making her lusty, but it’s also making her hungry. Once Kevin comes to peek in on how things are going, he’s greeted by a bloody sight. He immediately freaks out, grabs Evelyn, and takes off in their car to whatever destination they happen to find.

The next two stories in Embryo are presented as found-footage tales, both of which are lackluster and really don’t appear connected to what’s going on with Kevin and Evelyn. Because of this kind of disconnect, Embryo becomes a bit confusing and a chore to stick with. The intermission between each story depicts what occurs during Kevin and Evelyn’s getaway journey. At the end of Embryo, we see how things play out and the twists that are thrown in are predictable, but they’re also kind of fun.

If Embryo’s filmmakers hadn’t been in such a rush to release something and patience had been made a virtue, this film could have been so much more than what it is. What we’re given is a messy, muddled mashup of several elements from other films such as Species, Venom and Rabid which just leaves the viewer disappointed. However, the gore is decently done, so there’s the silver lining to this otherwise dreary cloud. If you’d like to experience Embryo, it’s currently streaming on Amazon Prime Video for $3.99.