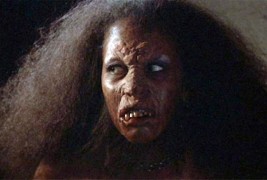 Howling II: Your Sister is a Werewolf. Or if you prefer, Howling II: Stirba – Werewolf Bitch. Either way you’re getting a sequel with a declarative sentence. The first is accurate. Ben White’s sister is a werewolf in Howling II: Your Sister is a Werewolf, and in fact they’re plenty of other werewolves and many of them are female. The second subtitle is also correct. Stirba (played by Sybil Danning) is in fact quite the bitch. At one point she even uses her werewolf voodoo to pop the eyes right out of some dwarf’s skull. It’s a gory, gruesome act that will undoubtedly make you shake your fist and cry “Stirba, you werewolf bitch!”

Although it’s nominally a sequel to 1981’s The Howling and based on Gary Brandner’s Return of the Howling novel (Brandner did in fact provide some thoughts and creative direction during the making of the film), Howling II has no real ancestor and goes nowhere. As evidence, the subsequent Howling films completely abandon it and its elaborate universe. Despite this and the overwhelming fact that Howling II is a pile of dog gruel, I’ve seen the movie hundreds of times. 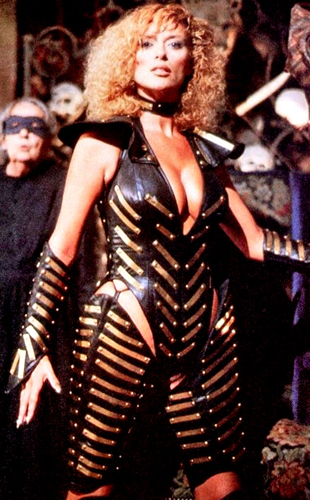 When dad and I moved from Fairmont to Morgantown when I was in the seventh grade, we upgraded from couch surfing with some golfland chum to renting an actual townhouse. Inside, dad spruced the place up with random knick knacks from his far-flung travels all throughout Florida and Indiana. In the center of it all was a big screen TV that, by the summer of 2000, had digital cable, which of course meant a lot of late night viewing on my part.

Of all the random channels, my undisputed favorite was 146. I don’t remember the name of the channel, but I remember its number. I also vividly remember the movies that it used to play every night after midnight. These films presented a real cavalcade of stink, from the direct to video Vampirella, which stars The Who’s Roger Daltrey as an evil and intergalactic vampire named Vlad, to the sleazy blaxploitation-meets-voodoo revenge farce Sugar Hill. Squeezed in between The Return of Count Yorga and the amazing The Return of the Living Dead, Howling II would play on repeat in our townhouse even on school nights. Anchored by Babel’s still catchy new wave song “The Howling,” Howling II is a red hot mess full of unnecessary gore and cinema’s most egregious use of bodice ripping. Just in case you’re wondering, the same scene of Stirba ripping her top off occurs 17 times during the end credits. I know because I counted and counted very closely.

In short, Howling II is story about how Ben White (played by the notoriously unskilled Red Brown), the brother of the recently deceased Karen White, and Jenny Templeton (played by Annie McEnroe), one of Karen’s co-workers, set out to avenge Karen’s death. After meeting Stefan Crosscoe (played by Christopher Lee, who obviously wants to be somewhere else), Ben and Jenny come to realize that Karen is not only still alive as a werewolf, but that a whole international cabal of werewolves lead by the ancient werewolf witch Stirba want her. Now, in the tenth millennium since Stirba’s birth, the world is quickly running towards a werewolf apocalypse wherein all the world will become werewolves. Time is of the essence, so after halting a werewolf raid on Karen’s casket, Ben, Jenny, and Stefan travel to Transylvania (actually Prague in the Czech Republic) in order to do battle with Stirba and her gathering forces. Once in the “dark country,” Howling II, which was partially filmed behind the Iron Curtain, amps up the weird sexuality and the strange mysticism. In one bizarre scene, a werewolf ritual in a dank castle decorated with Goya paintings transforms Stirba from an old crone into the svelte blonde sexpot Danning. Almost immediately, Stirba, whom the film compares to the Whore of Babylon even before the first full scene, gets her followers all hot and bothered and ready to orgy. After a few awkward sex scenes involving hairy semi-humans, the film cuts back to the heroic trio, who themselves embark upon a weird journey involving the mostly lycanthropic locals. 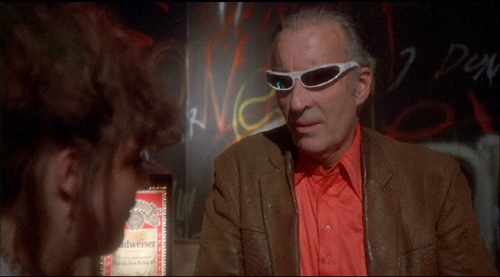 At this point, you should have the hang of things. The usual stuff happens: Ben, Jenny, Stefan, and a few hardy locals charge Stirba’s castle armed with silver for the younger werewolves and titanium for the older ones. A lot of locals die, while Ben, Jenny, and Stefan manage to outlast almost all of the werewolves. Then, in the final confrontation, Stefan and Stirba go all telepathic and engage in a battle of floating colors that ultimately ends in fire. Both die. Ben and Jenny fly back to Los Angeles as a couple. Fin.

By any stretch of the imagination, I can swallow a lot of pulp, but at times Howling II tastes like an entire forest. Still, the overall mood of the film is great, with its cheap-o gothic-eroticism that occasionally dips into Italian-style gore. Also, the film’s use of the punk rock aesthetic is a nice touch, and it’s safe to say that gutter punks constitute a large part of Howling II’s intended demographic. For a while I too wore Black Flag t-shirts almost every day, so I’ve always thought of Howling II and ‘80s horror generally as extensions of punk music. And if that’s the best you can say about a film, then it’s not all bad. Yes, Howling II is whacky, puerile, and illogical, but it isn’t all bad. 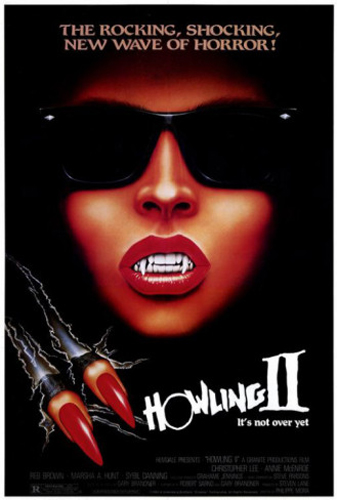