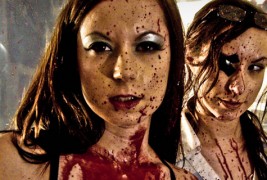 In early 2010, I caught wind of a film hailing from Canada that had the indie world abuzz. I did a little research and was immediately dragged into the hype. Two beautiful twins who coined themselves the Twisted Twins had made a faux-grindhouse trailer and showed it at their film school’s graduation ceremony. Half the audience left in disgust while the other half roared with applause so loud it overwhelmed the trailer’s dialogue. It was the ultimate one-finger salute to a school that did the women wrong. They say “hell hath no fury like a woman scorned”. The school’s shady business ways were a blessing in disguise – this sister act was on the fast track to giving the film industry the kick in the cahones it so desperately needed.

‘Dead Hooker in a Trunk’ has gained a cult following that rivals just about any film imaginable. It has played in numerous festivals and film events around the world, rightfully earning a spot on countless “Top Films of 2010” lists. The film first screened at the Ghouls on Film Festival in theUK. A few days later, it made its US debut in Texas at the Pretty/Scary DOA Bloodbath Film Fest.

As well-versed actresses and accomplished martial artists/stunt women extraordinaire, Jen and Sylvia Soska bring the goods on camera. Their relentless drive, a delicious combination of horror and humor, and a fierce determination for the craft they love are the things that really push the duo and their film over the top. The two women have doted on their project like any proud mother would their first born child, and for good reason.

Having funded their ‘Hooker’ project completely on their own and referring to Robert Rodriguez’s awesome book ‘Rebel without a Crew’ as their Bible during filming, Jen and Sylvia have proven that you don’t need a huge budget to make a great film. A few hyperactive and artistic minds, a hell of a fun story, and some girl power do a flick some good!

‘Dead Hooker in a Trunk’ is as faithful a nod to the classic grindhouse films as anything the film community has seen since the 1970s. The title alone should make just about any horror or indie fan grin like a madman (or woman). This movie has everything needed to become a timeless cult classic – gore, foul language, beautiful women, guns, awesome special effects and fight scenes, and hello?  A DEAD HOOKER…In a trunk!  To say this film has some legit street cred in the industry is a gross understatement. It’s what happens when professionals are approached by dedicated filmmakers with an infectious energy.

The film introduces us to four of the most entertaining archetypal characters in genre history – we get Rikki Gagne as ‘The Junkie’, C.J Wallis as the devout ‘Goody Two Shoes’, and of course, the fantastic Jen and Sylvia Soska as ‘The Geek’ and ‘The Badass’, respectively.  Tasha Moth, a gorgeous young woman who has assisted on several movie sets including ‘Hot Tub Time Machine’, ‘Red Riding Hood’, and ‘Saving Silverman’, plays the title character. In case you missed it, she’s the dead hooker in a trunk!

From top to bottom, the cast is on the money, as evidenced by the presence of Carlos Gallardo, arguably one of the most kick ass dudes in cinema (‘El Mariachi’, ‘Desperado’, ‘Planet Terror’), who has a cameo as God. It’s only fitting, seeing as how the Soska twins look to Robert Rodriguez and his work as divine intervention.  Then there’s the cowboy pimp played by John Tench, (‘Watchmen’, ‘Shooter’, ‘Brokeback Mountain’). 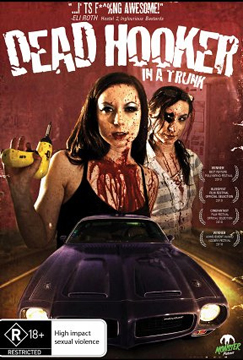 The flick begins by taking us through a seedy bar where we meet The Junkie, The Badass and The Hooker. It’s in this opening scene where the real grittiness is most glaring and in your face.  You have to strain to hear some of the dialogue (the only real moment in the entire film where this is an issue), but it sets the atmosphere of the scene fantastically. Let’s not have to be reminded that bigHollywoodfilms do this too – see the club scene in ‘The Social Network’ for a prime example. So if anyone points this out as a flaw, feel free to tell them to shove it.

After the night of the club scene, our four beloved characters quickly find that it’s not an old bag of fast food stinking up their car as they innocently cruise around.  Shit really hits the fan when it becomes obvious that someone wants the dead hooker for reasons that unfold delightfully. Not only are our characters avoiding the police at all costs, they run into a shoot-first, talk-later gang in a grimy apartment complex AND there’s still the pesky fact that a serial killer is on the loose. Don’t forget about the cowboy pimp, either.

Blood flies at a wonderful rate, the death toll suffices, and the stunts are jaw dropping. The buddy who watched this with me literally applauded following a confrontation between Sylvia’s character and the cowboy pimp.  Twists and turns are at every corner and by the time the end credits begin to roll, I am willing to bet you will have a grin from ear to ear on your face, just like I did.

Sure, there are certain aspects of this film that can be pointed out as flaws. We see dust on the camera lens during a few scenes. The audio is shaky at times. But those are the exact same things that also made this project one of the best film experiences I’ve ever had. That gritty, unapologetic film style has always struck a raw nerve in me. I only wish I had been sitting in a smoke choked theatre with the soles of my shoes sticking to the floor at two a.m. when I had the privilege of seeing the incredibly bad-assed Soska twins do their thing.

And enough cannot be said about CJ Wallis.  He not only plays ‘Goody Two Shoes’, delivering some of the funniest lines in the flick,  but he also did an incredible job editing and helping market this film.  It doesn’t take a rocket scientist to know that marketing is everything, especially with an indie horror flick. Wallis also does outstanding work on the film’s soundtrack, which is definitely deserving of some space on your iPod, should it ever become available. The advantages of social networks cannot be underestimated. Wallis and the Soska twins have kept their Facebook and Twitter profiles updated religiously ever since ‘Dead Hooker’ began to gain its just recognition.

With a miniscule budget and an invaluable amount of gusto and creativity, this film hits on all cylinders. The production will be hard to top as far as indie flicks go. The script is written with balls and raw energy that seem to be lost in many recent movies. If it sounds like I’m gushing, it’s because I am. In this writer’s opinion, ‘Dead Hooker in a Trunk’ ranks among the indie horror elite – right alongside the likes of ‘Halloween’ and ‘The Blair Witch Project’.

After viewing the film and immediately professing my undying love for this ‘Hooker’, I did something I had never done before, I wrote a fan letter. I didn’t write it for an autograph or any cheesy reason like that. I simply wanted to let the brains behind this operation know how much I greatly appreciated all their hard work. To see a film made by two die hard horror fans, despite all the naysayers and budget restrictions, was a huge motivation for the independent filmmaker in me.

What’s the point of this bit, you ask?  Well, the lovely and talented Twins have granted Ravenous Monster an interview, one that will forever rank among the most memorable discussions I’ve ever had. Check back soon for the first piece of our two-part conversation. It’s about to get bloody!