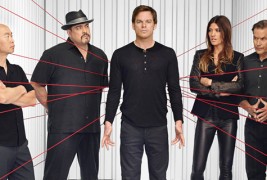 At last, TV’s longest running murder spree has ended.  After eight seasons, Dexter, the Showtime cable network’s first significant original drama is no more.  And it seems like just yesterday we were all nervously contemplating the outcome of the Ice Truck Killer case.

Beginning in 2006 and running every summer since then, the tales of Dexter Morgan (Michael C. Hall)—a blood spatter analyst for Miami Metro Homicide and moonlighting serial killer— have been both fun and frustrating, addictive and off-putting.  But before we get to the series in total, let’s discuss Season Eight, the final season.

Predictably, Miami is being stalked by a serial killer dubbed the Brain Surgeon.  Dr. Evelyn Vogel (Charlotte Rampling), a renowned expert of psychopathology who’s referred to as “The Serial Killer Whisperer” arrives in Miami and lends her expertise to the good folks at Homicide.  She also shows an alarming interest in Dexter before revealing that she not only knows about Harry’s code—a set of ethics defined by Dexter’s adoptive father by which Dexter abides to justify his killing—but she claims to have helped Harry come up with the code when Dexter was a child.

As Dexter struggles both to understand why he does what he does and to establish real and meaningful relationships, he and Dr. Vogel begin meeting regularly to discuss her sessions with Harry many years back.  In the process Dr. Vogel slowly becomes a surrogate, a sort of mother figure helping Dexter fill a rather large void in his life.  It’s through these meetings that Dr. Vogel shares with Dexter her suspicions that she’s being stalked by the Brain Surgeon and thus begins Dexter’s reciprocal stalking of her former patients, killing the ones who deserve it—according to the code—in an attempt to take out the Brain Surgeon.  Unfortunately, Dexter’s process fails to end the mysterious killer’s trophy gifts to the good doctor.

As Dexter and Dr. Vogel continue to meet and discuss those relationships of Dexter that we’ve witnessed over the course of the series, namely his relationship with Deb, Dexter starts to question whether or not he’s as “perfect” a psychopath as he’d assumed.  These doubts are magnified when femme fatale and former Dexter-squeeze from Season Seven, Hannah McKay (Yvonne Strahovski) returns to Miami under an alias and married to an abusive millionaire.

It doesn’t take long before Dexter and Hannah rekindle their flame and Hannah dispatches her abusive millionaire beau.  When the authorities catch on to the fact that Hannah’s back in Miami, they suspect Dexter of helping her hide.  The two of them decide there’s no way they can live together happily unless they leave Miami for good.  They hatch a plan to make a break for Argentina, but first Dexter must find and kill the Brain Surgeon whose identity turns out to be someone closer than Dexter and Dr. Vogel had ever imagined.

All the while we’re treated to the obligatory Dexter subplots including a Deb romance—although one that’s far more subtle and far less gross than in seasons past (I’m talkin’ about you, Hank Lundy!), as well some comic relief by way of Vince Masuka’s (C. S. Lee) discovery that he’s a dad.  Lee finally gets an opportunity to do some subtle and dramatic acting in this farewell season and it turns out he’s really good!  Better late than never, I suppose.

With the cops closing in on Hannah McKay and the Brain Surgeon closing in on Dr. Vogel, the clock ticks away toward a much-anticipated series finale, one last hour to make amends for blowing the well-earned capitol of the first four seasons with the barely-mediocre storytelling typical of these last four seasons—one last chance to go out with a bang and make us forget the slow, painful decline of a once-great television show.

Instead, Dexter’s coup de grâce is a perfect microcosm of that which has plagued it as characters make decisions out of deference to plotting and without well-developed or even rational justification.  Worse, the majority of these decisions fly in the face of nearly all the character development we’ve been privy to these past eight years.

The one bright spot in this otherwise dismal final episode is the very last scene.  The series epilogue lasts well short of a minute and it’s a haunting and understated glimpse of aftermath, full of interesting implications and nary a word of dialogue or voice over.  To say that it’s a shame the entire season hadn’t been executed with the same subtle sophistication would be an affront to understatements.  And even this scene, when contextualized against the entire series, amounts to a cop out that’s paradoxically both whimpering and monumental.

The fallout of the finale was immediately apparent as Dexter fans segregated into warring camps on various social media sites Sunday night, most voicing displeasure, outrage even.  So how did we get here?

Season Eight is about on par with Season Seven in that it’s tragically inferior to the series’ outstanding first four seasons while being substantially better than the abysmal fifth and sixth seasons.  The main weakness this season is that the writers clearly had determined how Dexter should end without having the necessary time or talent to get us there organically.  The result is twelve episodes that have very little consistency and that at times devolve into soap opera-like contrivances, lazy coincidences and other absurdities all in a ham-handed attempt to reach the conclusion on time.  We’re stuck as voyeurs while Dexter gets stuffed into a prebuilt box with a bow on it.

This specific problem regarding endings is nothing unusual and examples of missteps can be found throughout the annals of film and television.  For every Sunset Boulevard wherein we’re shown that the protagonist is dead during the movie’s opening shot and yet the movie plays out brilliantly and without a tension-sapping fatal inevitability, there are multiple movies like American Beauty that borrow the same set up but can’t meet the challenge of telling a story in which the protagonist doesn’t behave as if he’s already dead.  The former is exemplary; the latter is an unfunny version of Weekend at Bernie’s.

Most writers have a good sense of what their story’s ending will resemble when they approach it, but the good ones write like they haven’t the foggiest idea.  This yields believable characters and it leaves the contrivances to the bad-ideas pile.  In fact, to see how to competently end a series, one needed only to switch over to AMC on Sunday nights to watch the stunningly well-crafted Breaking Bad as it draws to a close as deftly as such an endeavor can be achieved.  Dexter Season 8 just sort of ends because it has to.

Dexter, the series, has been a mixed bag.  The first four seasons are addictive, tension-filled TV at its finest, but the premise has always put the show in a precarious position.  We’re asked to empathize with a psychopath, a murderer.  The justification for this behavior, Harry’s code, is something of a hollow gimmick.  What saved the series from itself was the original writing staff’s understanding of their perilous set up and the brilliant ways they went about using it to provide something sustainable.  The supporting characters—Deb, Rita, Rita’s kids, Dexter’s co-workers, etc.—became the catalysts for our empathy.  We didn’t want Dexter to be found out, not because it would hurt Dexter per say, but because it would hurt those whose happiness and well-being depend his family man façade.

The end of Season Four marked the beginning of the end.  Dexter’s home life with Rita and the kids juxtaposed against his life as a prolific serial murderer was what fueled the narrative.  When the Trinity Killer (John Lithgow) murdered Rita (Julie Benz) it created a huge void that required incredible skill in the writers room to overcome.  But unfortunately the series’ show runner (the leader of the writing staff) left the series after Season Four and subsequently left Dexter without someone to adequately guide the ship over the course of its final four seasons.  Dexter’s show runner has been replaced more than once since then but to no avail.

In the end, I liken Dexter to one of those model rockets.  Those things are spectacular fun on the way up, but once the fuel’s gone, it falls back to earth dully and unceremoniously.  The way up—those first four seasons—are incredible, and the way down, well….  The last four seasons will be defined by mistakes and squandered opportunities, running in place for a couple seasons and not doing enough these last two seasons with the inherent drama of Deb catching her brother red-handed, literally.

Dexter Season 8 has its moments.  There are individual episodes that remind me of what Sunday nights were like five or six years ago.  There’s nothing that changes the fact that Dexter’s first four seasons are great TV.  Unfortunately, these last four seasons have been a futile attempt to regain that greatness.

One thought on “Dexter Season 8 Review”