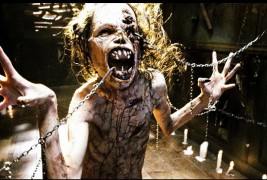 Considering The Horror Network Vol. 1 has been floating in the ether – if not in theaters – for a year or two, we’re a little late to the party with this review. But let’s assume compliments have no expiration date.

As anthologies go, this won’t rank up there with Creepshow or even venerable TV fare like Trilogy of Terror or Tales from the Crypt. For starters, most of the short stories in The Horror Network were filmed on shoestring budgets (on a couple, forget the shoestrings and think loafers). There also are no Stephen Kings or George Romeros attached to the project.

Still, the writing, the atmospherics, the performances and, most critically, the palpitations are grade A.

First up in the five-part series is 3 AM, a subtly scary story about a woman (Charlotte Armstrong) who arrives at what appears to be a remote English cottage, complaining over the phone to a friend about a series of harassing calls – yes, all at 3 a.m. She heads to bed but awakens at 2:48 a.m. to investigate strange, if fairly innocuous, sounds. As the clock ticks ominously toward the unhappy hour, you’re drawn into her mystery. When the phone rings and a demonic voice shatters the night, you realize a restless night is about to turn into something much worse.

Lee Matthews directs 3 AM with a sure hand, but the sound editing (and Matthews gets the credit there, too) surpasses “sure” and heads straight to “sensational.” This is one story that turns audio into an art form.

Next up is Edward, about a therapist (Artem Mishin as Dr. Aleksey) and patient (Nick Frangione as Hal) who suffers from night terrors and sleepwalking. This one takes a little time to develop and the back and forth grows a tad tedious. But when Hal begins to open up and his struggle with inner demons comes to the fore, watch out.

Edward, directed by Joseph Graham, features a couple of spartan sets and few effects. But the performers make the most of their lines, using facial expressions to do the dirty work. And the payoff – if slow to arrive – is worth the wait.

Best of the collection is The Quiet, featuring Jenni-Lea Finch as Alice, a mostly deaf girl who hops off a school bus deep in the wooded countryside, not knowing whether her mum will be there to pick her up. Instead, she sees a man (Nigel Long) in a blue van once, twice … and then decides he’s up to no good. So begins a pursuit through the lush landscape.

The Quiet scores points more for cinematography and suspense than for outright terror, but it’s a beautiful film to watch. Ms. Finch is a revelation, showing poise in character and skill as an actress. With Matthews again in the director‘s chair, this is the least complex, yet most satisfying entry in the anthology.

The penultimate offering is arguably the scariest. And given the gore and special effects, probably boasted the biggest budget. I’m happy to say it was money well spent. The subtitled Merry Little Christmas stars Macarena Gomez (Christina) and Bianca Rivera (Lola) as a mother and daughter who endured unspeakable acts of brutality. Gomez in particular gives a stunning portrayal, coping unsuccessfully with her disfigurement and the scars – both physical and mental – thrust upon her daughter.

This is a brutal film and hard to watch, particularly in that it’s juxtaposed against the Christmas season. But the message rings loud, and director Manuel Marin wrings everything out of his talented cast and, as noted, his budget. As an aside, you may never have quite the same feeling next time you hear “Silent Night.”

The anthology closes with The Deviant One, starring Brian Dorton and Brad Anderson. It plays as kind of an essay on the literal interpretation of the Bible, which leads to a blurring of the lines between good and evil. Without giving away too much, let’s just say serial killers come from all walks of life.

Dorton directs this piece, shooting in black and white as if to spotlight those who fail to see the gray in reality. There is no dialogue, and none needed.

Overall, Horror Network is a disparate collection of hidden gems. It’s a bit uneven at times, but that’s only natural given its international flavor and multitude of contributors. If, as reported, primary creators Dorton and Douglas Connor reviewed about 200 films before settling on the final five, they certainly did their homework.

For that alone, let’s give ’em an A-minus on the ol’ report card. 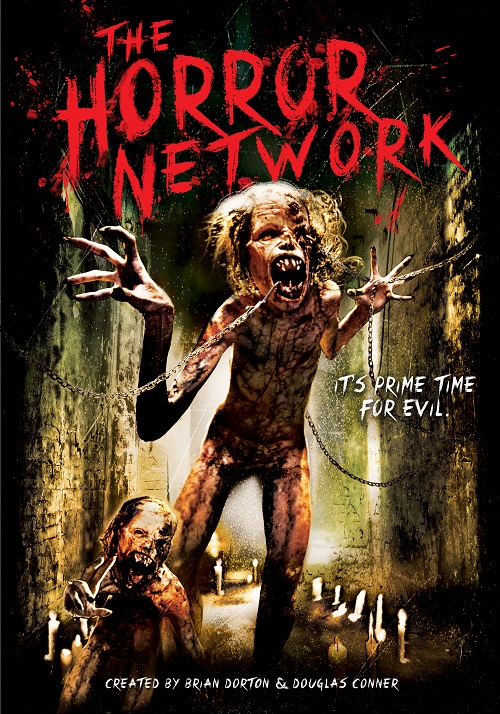