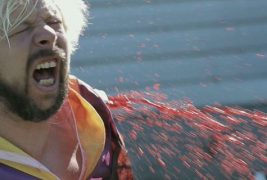 Greetings, sports fans! Time for a confession. When I’m not hacking up bodies in the lab or working on ways to resurrect them, I do like to occasionally kick back and relax with athletic competition. Traditional “sports ball” games don’t engage me that much, but when it comes to the grunt and groan antics of professional wrestling, I’ve been a long time fan.

I go quite a ways back, to the days of Mad Dog Vachon, the Crusher and Verne Gagne, from a time before pro wrestling became the corporate past-time it is today. I remember seeing Verne Gagne pull the mask off Dr. X (the wrestler, not the fiend played by Lionel Atwill in the 1930s) in a smoke-filled high school gym when I was barely old enough to wear pants and I was hooked for life. I miss the good old days when the secrets of wrestling were hidden deeper than the location of a Mafia graveyard, but I’ve kept up with the times and enjoy modern versions of the grappling game like AEW and MLW.

Therefore, my interest was considerably piqued when I heard of Wrestlemassacre, a wrestling-themed horror film featuring some actual grappling stars. To be sure, this is not the first wrestling horror movie…the film Wrestlemaniac featuring famed luchador Rey Mysterio as a masked killer was surprisingly effective…but for sure there are not a ton of grappling gorefests around.

Nobody should expect high art when “lowbrow” entertainment like horror and pro wrestling collide, but Wrestlemassacre winds up being even trashier and sleazier than I anticipated. Consider the first few minutes of the movie, where a monstrous killer in full wrestling gear chases a fully nude woman through the forest and quite literally rips her face off in a scene that already had my jaw dropping. To cut to the chase, Wrestlemassacre is a work of total trash that looks like it was shot over the course of a booze-soaked weekend in the vicinity of Handsome Jimmy Valiant’s training camp.

This one has the main attributes required for a grade-Z psychotronic outing: gratuitous sex and nudity, extreme gore, horrid acting and a lack of logic. So, if those are the things you are looking for, you have found them.

The film in many ways can be considered a bargain-basement, wrestling-themed version of Joker. A meek, low-functioning schmuck is tormented beyond endurance until he snaps and goes on a bloody rampage. Somehow Joker wound up winning an Academy Award; Wrestlemassacre makes the average Troma offering look like a Criterion Collection candidate. The storyline is old and tired, but the thing about “worm turns” revenge movies is that they almost always work on a primal level. If you liked seeing Travis Bickle and Arthur Fleck wreak bloody vengeance, you’ll probably enjoy seeing Randy the lawn worker run amuck here.

The direction here is so flat and the acting for the most part so incompetent that you will almost certainly need some kind of chemical enhancement to make it through the flick. I’ve been watching bad films for a long time and there are some performances here that rank among the most abysmal I’ve seen. I had low expectations going into this, but those depths were surpassed.

However, wrestling fans will get a kick out of seeing some old-time favorites here. Handsome Jimmy Valiant aka The Boogie Woogie Man plays a fairly important part and it’s fun spotting old-timers like Tony Atlas, The Sandman, Nikolai Volkoff and Manny Fernandez pop up (although Volkoff’s “performance” is one of the saddest things I’ve ever seen). I think some of the other cast members are local wrestlers or students at Valiant’s training camp. There are a couple of action scenes featuring wrestling moves that are pretty exciting, if you’re a fan.

Well, let’s lace up the boots and hit the ring…

We are first introduced to young layabout Owen and his girlfriend Becky. Owen is in deep, deep trouble as he owes local cowboy “midget” crime lord Mr. Valentine (I kid you not) a sum he cannot repay. Valentine’s extremely foul-mouthed and sleazy lieutenant Jackie has a laundry list of terrible things he will do to Owen and Becky if the money is not forthcoming. Once this scenario is set up, we then learn that hulking, simple-minded lawn worker Randy is working on Owen’s property.

Randy is the hero/villain of Wrestlemassacre. He’s played by Richie Acevedo, who had an actual ring career as The Cuban Assassin (not the most famous one, though…there’s been many Cuban Assassins throughout the years). Physically, Richie is perfect for the part as he looks like a shorter, stockier version of wrestling legend Bruiser Brody. As an actor, well, he tries his best. Basically, Randy is another version of a “Lenny” character, referring back to the idiot farmworker in Of Mice and Men. Randy’s main function in life seems to be a human pinata for others to beat and tear down. He’s insulted at almost every turn. His only pleasures in life are watching pro wrestling and a strange evangelist with a dreadful toupee. 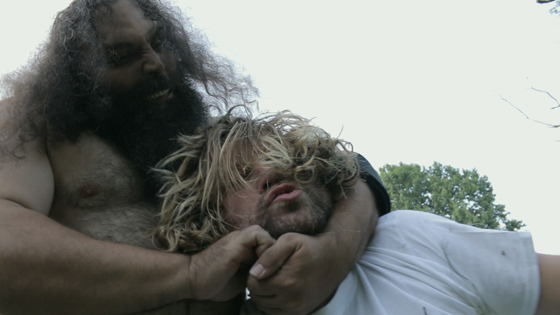 Everything seems to go wrong for poor Randy. After secretly watching one client’s wife taking a shower and then getting the hell beat out of him by her wrathful husband, Randy is informed that he no longer has a job at the lawn service company. The owner of the lawn company is “Mr. Hogan,” drolly played by Rick Jermain, who delivers one of the few good performances here. A lot of characters have wrestling names like Hogan, Vince, Brutus, etc. After his firing, Randy decides to risk it all and try for a career as a wrestler. He enlists at Boogie’s Wrestling Camp.

Boogie is legendary rassler Jimmy Valiant, who pours on the coal as a ruthless taskmaster. This scene takes place at Valiant’s actual wrestling school and probably in front of one of his actual classes. Wow, I would love to spend time checking out the old school wrestling photos and memorabilia that festoon this place. When Boogie asks for a volunteer, Randy enthusiastically steps into the ring…only to be humiliated by Boogie and laughed at by the class. It’s almost more than a man can bear.

The final straw comes when Randy speaks to his dad, a former wrestler played by the great Russian heel Nikolai Volkoff. This is one of the saddest scenes I’ve ever seen, as it is obvious that Volkoff is a very sick man and in no condition to act. To see the former strongman, who could turn an apple into applesauce just by closing his fist, reduced to this state is very hard to see and in fact, Volkoff passed away shortly after completing the movie. At any rate, his character gives son Randy a humiliating tongue-lashing, which finally pushes the poor slob over the edge. He strangles his Dad and is transformed into a murderous “wrestlemaniac.”

Now the gore begins to flow and believe me, it’s about as crazy and over the top as any slasher I’ve ever seen. Dressed in full grappling gear, Randy goes about getting even with everyone who’s ever put him down. He rips off faces, pulls out guts, tears off heads and in one particularly goofy scene, uses a weed whacker to turn a guy’s face into marinara. What’s funny about Randy’s rampage is that wrestling moves and holds that would be obviously brutal if applied full force are now actually applied for real, resulting in gruesome mayhem. Randy also makes his own “championship belt” by stitching together the faces of his victims…an absurd but cool visual.

While Randy is on his path of vengeance, Owen and Becky are being terrorized by Mr. Valentine, Jackie, and a crew of thugs. They had a couple of guests over during this house invasion who are unfortunately now part of the nastiness. This is a good place to mention that the woman playing Torie has got to be one of the most miserable actresses to ever grace the silver screen. I’m talking Ed Wood—Orgy of the Dead—levels of incompetence here.

Well, Randy definitely has a thing for Becky and makes his way to Owen’s place. This is where the wrestlemassacre of the title really takes place. Joining the mayhem is Becky’s tough and studly brother Shawn, played by former WWE star Rene Dupree. Dupree comes across as one of the best actors in the film, even pulling off an explicit sex scene.

The movie winds up in a bloody cluster as psycho Randy, gun-toting Shawn and Valentine and his goons all collide and go at each other until the expected nonsensical ending. A demon manages to join the fun, looking like he grabbed a mask off the clearance rack at Spirit Halloween.

Not much to say about Wrestlemassacre except it winds up even goofier and more mindless than my description may lead you to believe. But one thing I’ll say for it: It’s not dull. Wrestling fans will get a special kick out of it. There are actually some pretty good fight scenes, particularly Randy’s confrontation with Jackie. I’m not familiar with Jimmy Flame, who plays the nasty henchman, but he must be wrestling on some indie circuit as he matches up real well with Mr. Acevedo. Wish I could say the same about Shawn’s dust-up with Randy. Given Dupree’s skill, that fight should have been a slobberknocker, as good old J.R. might say. But it’s so dark and poorly filmed that it disappoints.

There’s a strong cult of wrestling fans who go for underground “death matches” where guys get slammed onto thumbtacks and broken glass and they cut each other up with weapons. That’s the target audience of Wrestlemassacre and they are welcome to it. With better direction and acting, this movie could have been further up the food chain. As it is, this is the raw meat of both horror and wrestling. 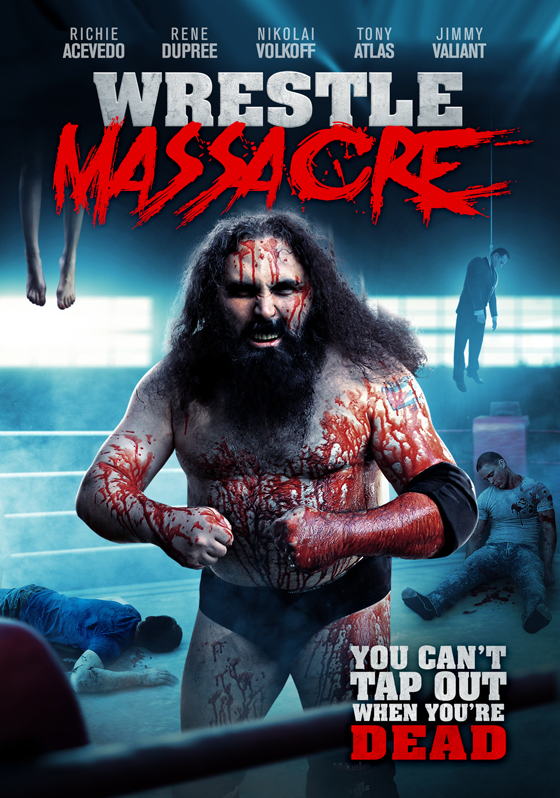