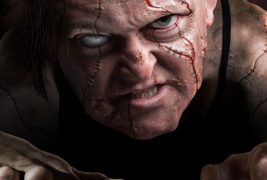 So, I just watched what just may be the most terrifying horror movie of 2020 thus far. Surprisingly, this film has nothing to do with terrible worldwide pandemics or corrupt politics. In fact, what it does deal with is something far more horrible. My friends, this nightmare of a film is called Baby Frankenstein, brought to us from the minds of writers Jon YonKondy and Mike Rutoski and distributed by the fine folks at Wild Eye Releasing.  Unfortunately, the title is perhaps the scariest thing about this cringe-fest of a movie.

It’s disappointing, because I was really hoping for something unique and original. What I got was a throwback to the comedy(?)-horror(?) flicks of the ‘80s. I guess it’s time for me to duck and cover as I admit to you that I’m not the biggest fan of films like The Goonies, Monster Squad or E.T., but if you are, then Baby Frankenstein may be the hokey fun you’re looking for. Personally, I found this movie painful to watch because the story is too cookie-cutter-clean and simple.

Basically, Baby Frankenstein is something you’d see on the Hallmark Channel during the Halloween season. A teenage boy named Lance (Ian Barling) moves with his mom Kim (Eileen Rosen) and her irritating douchebag of a boyfriend, Ken (Patrick McCartney), into a new house. While exploring the new house, Lance naturally discovers a secret door with a huge-assed padlock that’s gone unnoticed by everyone else for no good reason. Naturally, the kid finds a way into the forbidden room and goes nosing around.

As he’s snooping around, he finds newspaper articles about the Lundquist Industries opening, and then one account of how a robbery had occurred at the company that left five dead and a billion-dollar prototype stolen. Spooked, he turns to see something that’s got a sheet draped over it. Once Lance uncovers the object, we shockingly and surprisingly see that it’s the prototype!! Anyway, so Lance pokes and prods it and somehow winds up activating The Thing with the Plexiglass Head, or y’know, the title character. Thus, the family-friendly, feel-good adventure begins as the little guy freaks out once he’s activated and takes off.

Lance, who’s also freaked out at discovering that the creature’s alive, winds up running into his neighbor, named Truth (Cora Savage), who happens to live across the street. Together, they wind up tracking The Prototype down and taking care of it, talking to it like it’s a puppy. However, Douchey Boyfriend Ken finds out about what the kids are doing and what they’ve found. Ken becomes even more of an annoying dick once he’s told about the big cash reward being offered by Lindquist Industries once the head evil guy (Andre Gower) at the company is informed that the precious prototype has been activated and wants it returned.

There’s no real horror to this horror movie. There’s no blood, there’s no nudity, but there is a pretty cringey shower scene involving Lance, Ken and Ken’s weird silent sidekick. There’s really no cursing, no jump scares, and no scares of any kind really. Baby Frankenstein is just a cutesy “fun” romp of a film. I think this movie would have worked better if it had been animated, maybe? I could see it working better as a PIXAR film and I probably would have enjoyed it a lot more. Anyway, if you have little ones around, this might be a good Halloween movie to show them. It has a few entertaining scenes and the title creature (played by Rance Nix) IS kinda cute in a Baby Yoda type of way.

Anyway, if you’re so inclined to watch Baby Frankenstein, it’s currently streaming on Amazon Prime for $3.99. You can also learn more about this film on Facebook and Twitter. 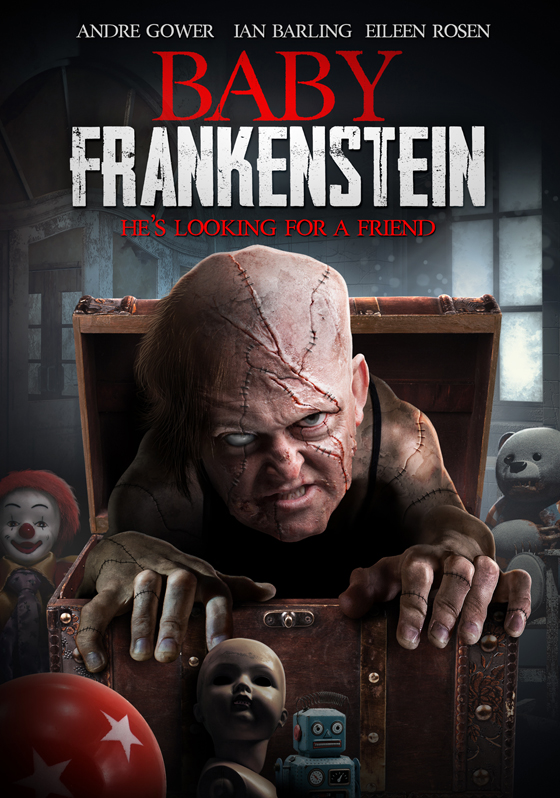