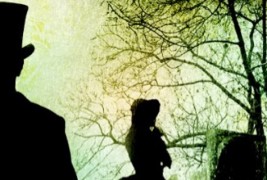 One would be hard pressed to find a name more English than Vaughn Entwistle. I’ve certainly never heard anything that oozes tea and crumpets quite like it. On top of it all, Mr. Entwistle is the author of an oh-so English novel—The Angel of Highgate. Set in the autumn of 1859, The Angel of Highgate combines two particularly English traditions together in order to form something worthwhile. On the one hand, Entwistle’s tale is thoroughly Dickensian. The Angel of Highgate takes its readers “slumming” through the wasteland of Victorian London. Fog, shit, gin, and mobsmen rule the city’s scummier sections, while respectable middle class scientists and debauched aristocrats control the outskirts. Class interactions play a central part, as the novel’s protagonist, the morbid and hedonistic Lord Geoffrey Thraxton, undergoes a rake’s progress of sorts. The reason? The old whoremaster manages to fall in love with a working class girl.

This is where a second element comes in. Besides being Dickensian, The Angel of Highgate is also a Gothic romance. Think along the lines of Daphne du Maurier or the Brontë sisters. Aurelia Greeley, a sick, pale girl with a golden heart, is responsible for much of the lovey dovey stuff. Her relationship with Lord Thraxton, although forbidden by all, especially her post-pugilist father, eventually ends in melancholic happiness.

Speaking of melancholy, dourness and depression permeate every inch of The Angel of Highgate. Entwistle’s book must’ve been written on a grey morning, for nothing is overly rosy or bright here. Despite being a libertine of the highest order, Lord Thraxton is consumed by death. When not simply strolling through the headstones of London’s Highgate Cemetery (a place made famous in the early 1970s thanks to well-publicized reports that claimed that a vampire roamed its rows), Thraxton buys the time of harlots, dresses them up like newly dead corpses, then consummates his love for death inside of select mausoleums. Although we may want to wag our fingers at Lord Thraxton’s peculiar habits, his predilection for the bizarre is the reason why he meets Aurelia in the first place. The young woman likes to patrol the cemetery too, especially since her late mother is buried there. One night, after Thraxton and friend Algernon Hyde-Davies, a botanist at the Royal Botanic Gardens, dabble in some opium, they come upon the gangster Mordecai Fowler and his men in Highgate. The criminals are trying to bring back a body to sell. They find Aurelia and manhandle her until Thraxton, Hyde-Davies, and the cemetery’s sexton intervene. Thraxton gets thrashed, but survives. Aurelia makes it through the night, as well, and feels forever indebted to the dashing rouge. Their love begins here.

Meanwhile, another character enters the fray. Spurred on by an embarrassing duel with Lord Thraxton, the literary critic Augustus Skinner calls upon Doctor Silas Garrette. Physically, Skinner needs Dr. Garrette to pull Thraxton’s bullet from his bum, which has gone gangrenous. Dr. Garrette loads Skinner up with laudanum (Skinner eventually becomes an addict), but does no surgery. Dr. Garrette is more interested in Skinner’s desire for revenge, and the two plot to hurt Thraxton by going after what he loves the most. This conspiracy is joined by Fowler’s gang, and thus the real meat of The Angel of Highgate begins to cook.

Unlike the others, Dr. Garrette does not feel like a typical Victorian product. With his smooth, bald head and pale skin, Dr. Garrette, a deranged veteran of the Crimean War who keeps the fetuses of abnormal children in jars, seems like a close relative of Judge Holden in Blood Meridian. And like Cormac McCarthy’s mystical villain, Dr. Garrette’s motivations are shrouded in confusion. Unfortunately, this confusion is probably not intentional. Dr. Garrette simply does not appear enough in the novel to be considered one of literature’s more spellbinding baddies.

Pacing and construction mare The Angel of Highgate overall. For almost two hundred pages, Entwistle’s novel leans a little too heavy on the romance. Many pages detail the doomed relationship between Thraxton and Aurelia, from their socially-conscience walk through the slums to their problems with Aurelia’s father. Again, it seems that Entwistle can’t help but to parade around in Dickensian clothing, for Aurelia’s influence on Thraxton, which turns him from a snobbish provocateur into a caring and loving man of the people, is not unlike the power the ghosts in A Christmas Carol exert over Ebenezer Scrooge.

When the action does pick up, especially after page 300, everything is rushed towards a rather unfulfilling climax. The chief villain is too incomplete to even be a cipher, while our heroes virtually disappear only to reappear as either boring adults or shabby caretakers. As for the love, it’s plenty sappy at the end. For a writer who specializes in turning Sir Arthur Conan Doyle into his creation, Entwistle’s attempt at a mid-Victorian chiller comes up a little dry. Although some of the characters are likable, and even though Dr. Garrette has the potential to be something great, The Angel of Highgate simply fails to deliver anything other than a shoulder shrug. 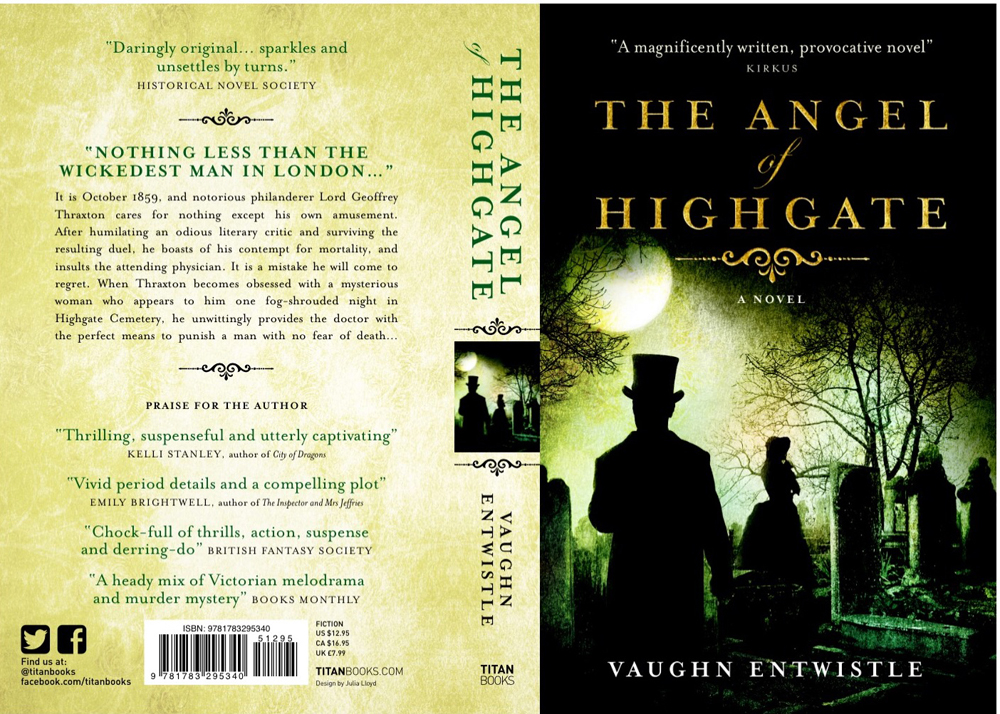 The Angel of Highgate is currently available from Titan Books.