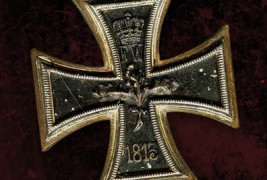 Vampires have remained popular, more or less, for the past hundred years or so. By that I mean there’s been no time where people were saying en masse, “Say, what are these ‘vampires’ of which you speak? They drink what now?” But a couple of years ago, boy, you couldn’t throw a bulb of garlic without seriously injuring a member of the undead community. On HBO you had your boobs-and-bad language vampires, on the CW you had your vampire diarists, and of course you had TWILIGHT for promise-ring vampires (and frequently-shirtless boring love triangles). And vampires comprised like 104% of all other teen fiction.

And then there’s the increasingly annoying and overplayed literary mash-up books. Nothing in the public domain was safe! PRIDE AND PREJUDICE AND ZOMBIES, SENSE AND SENSIBILITY AND SEA MONSTERS, LITTLE VAMPIRE WOMEN, et al. Personally I’m waiting for THE WIND IN THE WILLOWS AND LEATHERFACE. Think about it! Mr. Toad goes on his wild ride, the car breaks down … the rest writes itself! But I digress.

Kim Newman’s ANNO DRACULA books (the first book, from 1992, gives the series its name) combines both of these trends, but, you know, several years earlier. His novels overflow with characters from books and movies, some familiar and some obscure. And – spoiler alert!, although the title of the first book may be a giveaway – vampires. But they’d gone out of print until Titan Books began reissuing them, starting last year with ANNO DRACULA, and following it up this year with THE BLOODY RED BARON. (Two more books will follow, DRACULA CHA CHA CHA and JOHNNY ALUCARD, which is a new addition.) These editions feature new cover art and copious special features. The question is, are they worth your time? Are they any good? Should you spend your time and/or money on these books? The answer to all of these questions (and many others that remain stubbornly unasked) is an unequivocal YES. Newman creates an interesting world, a great playground for his vivid imagination. These are books written with a storyteller’s eye, and a nerd’s love of the subject.

ANNO DRACULA starts with an irresistible premise: what if, in Bram Stoker’s DRACULA, Van Helsing lost and Dracula won? Newman builds his idea from there: Dracula marries Queen Victoria, becomes the Prince Consort (and de facto ruler of the British Empire), and vampirism becomes not only common but fashionable in late-1880s London. Vampires from all over Europe (and from every stripe of vampire fiction) flock to London, and vampirism comes out of the closet and into the streets, as it were.

It’s 1888 in London, the time of the Jack the Ripper murders. The killings of new-born vampire prostitutes in Whitechapel district have all of London on edge, including the queen and Drac himself. The police investigation gets nowhere, so a representative of the shadowy Diogenes Club is dispatched to investigate.

Several of the main characters from DRACULA have substantial roles in the book, most notably Dr. Jack Seward and Lord Godalming, Arthur Holmwood. There are subtle shout-outs to works as disparate as BLACKULA, PANDORA’S BOX, Rudyard Kipling stories, and 80s Hong Kong action movies, DARK SHADOWS, OLIVER TWIST, as well as real people and historical figures from Queen Victoria on down. For example, the police officers assigned to the case are Frederick Abbeline, who investigated the Ripper killings in real life (although, presumably, not as a vampire) and Sherlock Holmes’ frequent frenemy Inspector Lestrade. Newman builds these diverse sources and references into the story (mostly) invisibly. There are a couple of places where it’s a distraction, but once the story really gets moving that’s no longer an issue.

The main characters are, smartly, both original. Charles Beauregard is the representative of the Diogenes Club, which is basically the British Secret Service for the occult, and Geneviève Dieudonné is an elder vampire who works as a nurse ministering to the new-born vampire community. (Similar-though-not-identical Geneviève Dieudonnés have appeared in other works by Newman; she’s like his own private Duncan Idaho.) The strength of the book is a direct reflection of the strength of these characters. If these characters sucked (minor pun intended), the book would be reduced to a mere gimmick. But because these are strong, multi-dimensional characters that we care about, we’re emotionally invested in the story.

Beauregard is portrayed as a man who, due to circumstances as well as being a “warm” (i.e., human) in a world of vampires, is always slightly in over his head, but one who is smart, dogged, and resourceful nonetheless. But it is Geneviève who is the real takeaway of the book. She’s a 400-plus year-old woman trapped in the body of a 16-year-old girl; a smart, strong, complex character, far removed from the spoiled, simpering caricatures modern audiences associate with the Victorian Era (Lucy Westenra, I’m looking at you).

But all of this is pretty conventional stuff, relatively speaking, even though it’s well-written and a story smartly-told. A mere plot description doesn’t do this book justice. ANNO DRACULA does many things, and it does most of them extremely well. What makes ANNO DRACULA fantastic, what makes it work, is the complex interweaving of genres into one intoxicating whole. It’s an alternate history, it’s a pop-culture mash-up of literally dozens upon dozens of sources, it’s a horror novel, it’s a history novel, it’s a spy novel, and more. But most of all, it’s fun.

The 1995 sort-of sequel, THE BLOODY RED BARON is a more conventional story, and therefore less interesting than ANNO DRACULA. Set 30-some years after the previous book, BLOODY RED BARON takes place in the trenches of – and in the skies over – World War I.

The Diogenes Club again plays a major role, this time investigating disturbing rumors from the front regarding German experiments on their most renowned flyers, the Jagdgeschwader Eins, or JG1 – including Baron von Richthofen, the Red Baron himself. BLOODY RED BARON boasts the same panoply of characters from real life and various fictions, but there are fewer twists to the story, and the characters are less interesting. Charles Beauregard appears, but he’s been supplanted by Edwin Winthrop as the main instrument of the Diogenes Club. Geneviève doesn’t appear at all, but Kate Reed (a semi-original character) takes her place as the female vampire. She’s a character who was due to appear in the original DRACULA but for whatever reason did not. She had a small part in ANNO DRACULA, but her role here is greatly expanded. Kate is, like Geneviève, a strong and resourceful character, but she pales in comparison. Still, she’s the most interesting character in the book.

BLOODY RED BARON is more straightforward, without the twists and turns of its predecessor, however it’s still a more than worthwhile read. The action scenes are deftly handled, and the book moves with a  jackhammer pace. So what if it’s not as good as ANNO DRACULA? That bar is pretty high. The world Newman has created is still a fun one to play around in. And did I mention that Edgar Allen Poe is hired to write the biography of the Red Baron?

In both of these books DRACULA himself makes an appearance, but he’s not a major part of the action, at least not directly. That said, his presence looms on every page. Newman takes a character that we’ve seen in a hundred different forms, some serious, some scary, some silly, and reinvents him brilliantly. His absence, paradoxically, makes his character more powerful, more mysterious. Seeing him too much would demystify the character as he’s portrayed in Newman’s universe.

Each book features numerous special features, including (helpfully) Newman explicating some of his sources and inspirations. The best special feature is in BLOODY RED BARON, a novella called ANNO DRACULA 1923: VAMPIRE ROMANCE featuring Geneviève. This novella, frankly, is even better than BLOODY RED BARON itself. Like ANNO DRACULA, it’s a genre-bending and genre-hopping romp with a truly surprising twist.

I loved ANNO DRACULA, and I really liked BLOODY RED BARON. But the best recommendation I can give is this: I’ll be searching out the next book as soon as it’s released. These are smart, clever, compulsive reads that no true horror or vampire enthusiast should overlook.