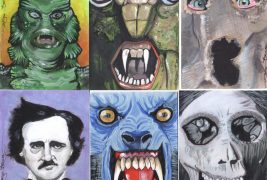 A handful of years ago, New York’s Jason Brower found his expressive niche. He draws and paints pictures of creepy, crazy, crusty, and cool pop-culture. From Garbage Pail Kids and Star Wars to Sir Christopher Lee and Vincent Price, Brower’s work runs the gamut of the fantastic and the frightening. Hot off his recent Rondo Award, Ravenous Monster caught up with the ambitious artist whose name and work are increasingly being recognized by the horror community. Horror Fans, meet Jason Brower….

Ravenous Monster: You’ve been busy the past five years or so – working on lots of cards from the likes of Upper Deck, Topps Wacky Packages, and Garbage Pail Kids, not to mention various comics, books, and magazines. How did you finally break in to the business side of things?

Jason Brower: I was working at the Topps Vault and my manager Mike Jaspersen saw on my resume that I was an artist. He gave me two blanks to see what I could do and without me knowing sent them to the art director. He liked what he saw and within a week or so I was doing sketch cards for Topps and Wacky Packages. Before I knew it I was doing sketches for Upper Deck, Monsterwax, and Viceroy Card Co. I wanted to branch out into other areas so I began pursuing magazine work. That’s when I contacted Dick Klemensen at Little Shoppe of Horrors and started doing interior work for the magazine which has been amazing; it’s a great publication.

RavMon: You recently won a Rondo Award. What was that experience like?

JB: When I saw that I won the Linda Miller Award for Fan Artist of the Year I really couldn’t believe it. My girlfriend Paroo made it clear that missing the ceremony in Louisville was NOT an option and I agreed. It was very exciting getting plans together to make the trip down to Kentucky. My friend Rich, whom I’ve known for 43 years and is like a brother to me, made the trip with us.

Halfway through the 14-hour trip south we made a stop at the Evans City Cemetery and that was an incredible experience. Anyone who knows horror will know that this is where “Night of the Living Dead” was filmed. As for the actual ceremony I can’t begin to say how great it was. To be among so many great people in the horror community and industry was a real pleasure. 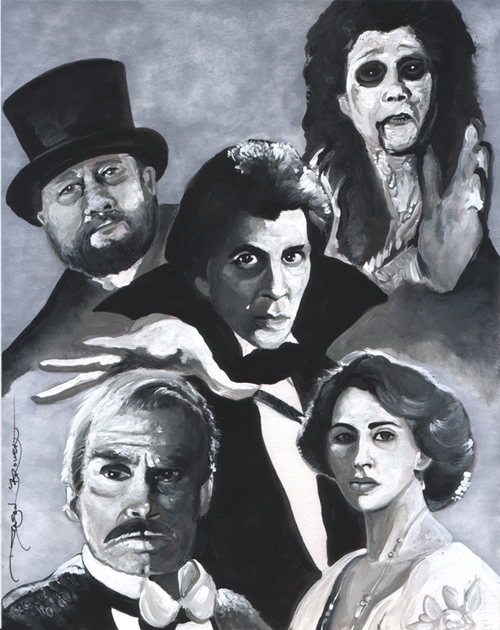 RavMon: You’ve done some work involving Star Wars. How did that come about?

JB: My involvement with the Star Wars franchise began by being at Topps. I’d been doing sketch card work for Wacky Packages, then Garbage Pail Kids sets for a while, and wanted to do more realistic work so I contacted the brand manager for Star Wars and he signed me on. I’m on my fourth Star Wars set now.

RavMon: That’s a pretty high-profile job. Has anything else surpassed your Star Wars work in that regard?

JB: As far as popularity and profile I’d have to say working on a Star Wars license is pretty hard to beat. Not only is the Topps name attached but Lucasfilm and Disney as well. That’s huge!

JB: I’d have to say doing a Stephen King book cover is THE dream job. I would also love to do cover or interior work for Famous Monsters, Fangoria, Rue Morgue or Scary Monsters magazines.

JB: As much as I love doing the sketch cards I’d have to say that doing work for Little Shoppe of Horrors magazine is a truly satisfying experience both artistically and emotionally. Having grown up watching and loving Hammer Films and now doing work for a magazine that focuses on British horror, especially Hammer, I am beyond excited; a cool gig for sure.

RavMon: Who were the artists that inspired the younger Jason Brower to try to do this professionally?

JB: I grew up reading Creepy and Eerie magazines and Famous Monsters so, naturally, Frank Frazetta and Basil Gogos are two of my earliest influences and inspirations and always will be. The Kiss LP covers by Ken Kelly were very inspiring and influential as well.

RavMon: Like me, you’re also a working drummer. How long have you been hittin’ the skins? 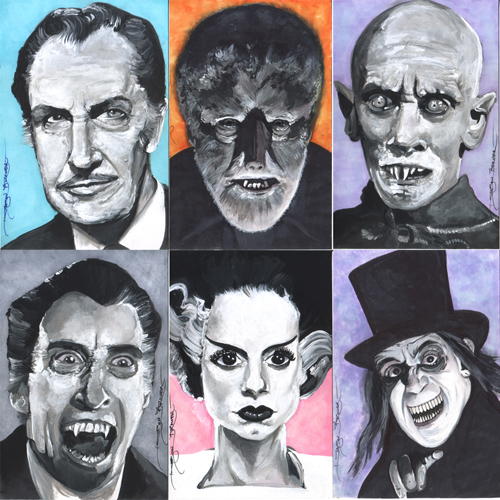 JB: I’ve had an interest in drumming since I age eight thanks to Peter Criss from KISS! I started playing and taking lessons when I was a fifth grader in 1980 so that’s about 36 years. When I was 15, my Uncle bought me a keyboard and I taught myself to play it. That opened up a new world of composing and, literally, dozens of recording projects were spawned from that thirst to write. My travels as a working musician have taken me onto stages such as The Apollo Theatre, B.B. King’s and CBGBs in my native NY. I’ve toured and have been featured in music magazines. I’m also a composer so I’ve had my own band project that’s performed all over Manhattan. Music and art are my twin passions in life.

RavMon: Does your music ever inform your artwork or vice versa?

JB: Actually they have never crossed over into each other. They are two very separate and different worlds and I like it like that.

RavMon: You’re best known for your horror work.   What are your five favorite horror flicks?

RavMon: Have there been any recent horror movies that have blown you away?

JB: I haven’t seen too many new films lately but I have to say Robert Eggers’ The Witch was great. “Wouldst thou like to live deliciously?”

RavMon: Do you sell work or commission original work for the general public?

RavMon: What do you have coming up?

JB: I’m currently hard at work on the Star Wars Masterworks card set for Topps and I’m producing a Dracula 1979 piece in the new issue of Little Shoppe of Horrors. I’m also doing an exclusive jumbo print of Audrey, Jr. for a Little Shop of Horrors 1960 card set, and I’ve got about four commissioned paintings slated for the next month so I’ll be sporting my “painting togs” more frequently than I’ll be setting up my drum chair! I’m set to be a guest artist at the Philly Non-Sport Show this October so I hope to meet more horror friends and fans in the PA area. One of the great things about being in this business is experiencing the passion that’s consistently generated in this genre by everyone involved, whether they are a fan or a creative contributor. I want to be part of that. It’s an exciting time to be a horror fan! 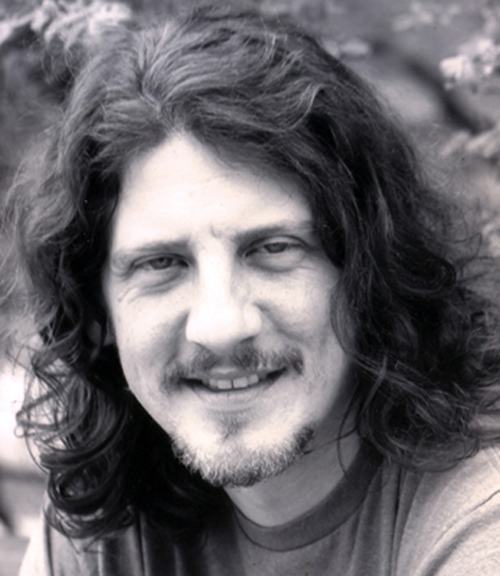 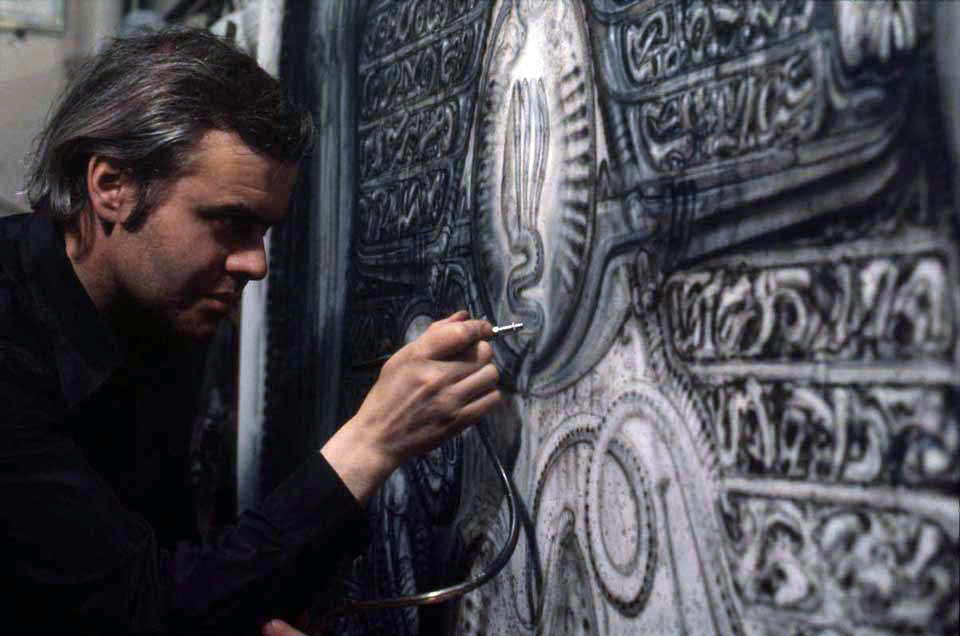