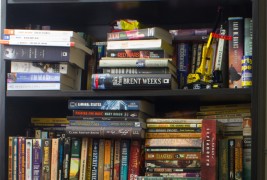 From the darkness has curiosity ever reached out and struck you?  Has it caused you to wonder about your favorite genre writers and what’s on their bookshelves?  It’s reached out and struck me.  Do they have some classic pulp detective novels?  What about graphic novel collections?  Maybe the severed head of the poor unfortunate soul who sent them their first rejection letter.

Like the person in a horror story that hears a strange noise, I ventured alone into the darkness to investigate.  And here at Ravenous Monster I will bring you your favorite horror authors’ bookshelves and their personal thoughts on their collections, until the thing in the shadows finally reaches out and claims me…. 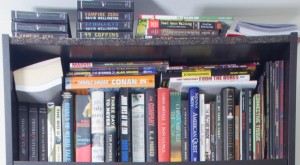 Here are my two Ikea bookcases, which are starting to sag a little.  It’s a little weird to look at these and see just how few paper books I own now.  I’ve moved around a fair bit in my life and had to give away the bulk of the books I’ve ever owned; this really just represents the last three years of collecting.  There’s an awful lot of cheap fantasy paperbacks here because I devour those, and a fair collection of graphic novels, most of which were recommended by friends.

Among the things I’ve managed to keep longer than that are some very old leatherbound books that have meant something to me over the years: a very nice edition of the Rubaiyat of Omar Khayyam, with the original illustrations by Edmund Joseph Sullivan, which was a gift from my sister; a copy of the 1896 edition of Brewer’s Dictionary of Phrase and Fable (a gift from my grandfather); and a single volume condensation of the Golden Bough I rescued from a mass pruning at the Syracuse University library when I was a student there.  I keep these around for when I want to feel like a pretentious bibliophile, or maybe to counterbalance all the paperbacks about barbarians and lost continents.  But I read the paperbacks a lot more often.  There’s a real dictionary and a real atlas in there that were also gifts from my grandfather, but I haven’t consulted either of those since I discovered the internet.  By now the atlas is so out of date it’s probably useless but I don’t think I’ll ever give that one away. 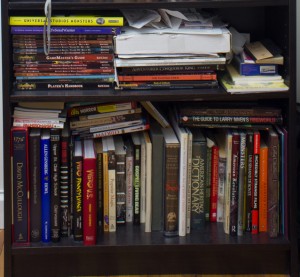 Other than books what do we have here?  A bag of loose change I keep meaning to take to the bank.  A Lego crane I built because Legos are awesome and fun, and I was exceptionally proud of the fact I got all the right pegs in the right holes and was able to successfully follow printed instructions (I had more trouble with the Ikea bookcases, which are not exactly put together correctly).  There’s a Rubik’s cube I got three years ago, which I toy with when I’m trying to figure out a thorny chapter or paragraph.  I’ve written six novels since then, but only managed to get one face of the Rubik’s cube done.  Oh, and there’s a pair of sunglasses with attached sideburns that make me look like Elvis when I wear them.  Of course. 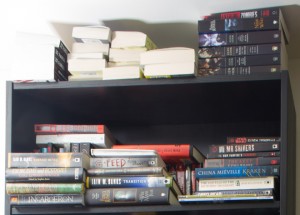 So—mostly gifts, mostly things people have given me over the years.  People tend to give me books, I guess, or maybe I’m just more likely to keep books than other gifts.  It’s funny.  I don’t keep snapshots.  I don’t really have a lot of pictures of myself or my friends or my family.  People always used to ask me how I remember the important things.  Looking at these bookcases I’m pretty sure I have an answer, now. 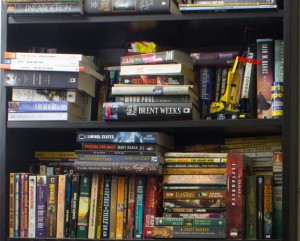 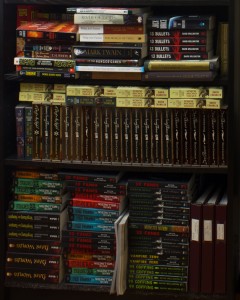 About this author: David Wellington is the author of several horror series, including the Monster Island trilogy (zombies) and the Frostbite series (werewolves).  Most recently he finished his vampire series with 32 Fangs.  As you might imagine he likes monsters very much.  In July 2013 he will release his first thriller novel, Chimera, which is available for preorder now.  Chimera is a spy novel, and it is full of monsters, too.  He lives in Brooklyn, NY and writes full time.  For more information or to read some of his work for free, please visit davidwellington.net.