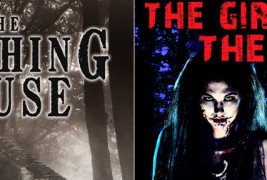 For a guy who’s eaten nearly thirty different species of animal,[1] I can be pretty damn finicky.  You can put almost anything on my plate, but when it comes to reading—and especially when it comes to horror–my nose is turned up more often than it’s in a book.  This is a personal failing, and one I urge you to keep in mind when deciding for yourself whether Brian Moreland’s new novella, The Witching House (and its accompanying short story, The Girl from the Blood Coven) sounds like your cauldron of toil and trouble.  Brought to us by Samhain Publishing, The Witching House tells the story of Sarah Donovan, her new boyfriend Dean, and his newly-married friends Meg and Casey.  Dean, Meg, and Casey are all into urban exploring and ghost-hunting, and Sarah wants to impress Dean, so when he suggests they visit an abandoned and reputedly haunted house in the East Texas woods where a coven of hippie witches was massacred forty years earlier by unknown hands, she agrees.[2]  Guided by a creepy redneck named Ronnie, the four soon learn that in Horrorland, “reputedly haunted” means “in thrall to a demonic entity thirsting for human blood and its legions of undead minions.”

To be totally, brutally honest, there’s nothing surprising here.  The characters you expect to live, live; the ones you know are going to die, die.  We get a scant origin story for the big bad, but never really learn the rules on its powers, abilities, limitations, or goals beyond the fact that it likes to eat people and is tired of being fed pigs by the house’s kindhearted, mentally-handicapped caretaker, Otis, who sometimes comes across as a savant and sometimes seems cartoonishly dumb.  This bifurcation of personality is a problem that infects several of the characters to one extent or another.  Sarah oscillates between being in “dread” at the prospect of breaking into an abandoned house to cheerfully antiquing in an attic filled with demonic tomes and witch paraphernalia.  I couldn’t quite decide whether Casey and Meg were supposed to be lovable or annoying.[3]  Dean is an athletic, debonair, alpha male, but though we spend a lot of time in his head, we never learn much more about him.

Maybe it was the East Texas setting, but I wanted Moreland to go a little more Joe R. Lansdale with The Witching House and tap into that rich, regional, Southern Gothic-cum-Tex-Mex voice.  You can’t do that with four bland, attractive yuppies, though; you need a guy like whiskey-swillin’, shotgun-totin’, pig-raisin’, “few bricks short of a shithouse” Otis.  Otis, whose past is intimately tied to the house, is the most intriguing, sympathetic, and unique character in the story.  Living in near-constant psychic communion with the entity in the house, Otis’s internal struggle between a need for familial love and a desire to contain the house’s evil is by far the most emotionally-gripping part of the story.  Sadly, he ends up a very secondary, incidental character to our sexier protagonists.

I got something very different out of The Witching House than what I was hoping for, but I won’t say Moreland is a bad writer.  Instead, I think we end up on different sides of an old genre debate: pace versus atmosphere.  Back in the 1930s, Lovecraft wrote ranting letters about how the editors at Astounding tried to cut swaths out of At the Mountains of Madness to make it a quicker, more action-packed read.  In the late ‘80s and early ‘90s, splatterpunks argued the same shock vs. ambience issue with horror traditionalists.  Me, I tend to be an atmosphere guy.[4]  I want a world with history and characters and a growing sense of menace.  I want to be inside peoples’ heads and I want to hear their voices.  I want vivid descriptions (and Moreland has a few, don’t get me wrong) and dark implications.  I don’t need everything spelled out; I want to draw my own conclusions and I want some ambiguity.  Keep me in the voice, in the world, and I don’t care how quickly the plot moves.  I don’t know Moreland personally, but I suspect, based on passages like the following (from The Witching House), that he comes from the other school:

“Sarah got on her knees and opened a trunk on the floor. It was full of books on witchcraft and black magic. She flipped through one of them. It contained lots of spells and illustrations of demons. One chapter was called “How to Summon Evil Spirits”. This definitely wasn’t typical Wiccan magic. Sarah’s grandmother would never own a book like this. Sarah got the heebie-jeebies just looking at all the demonic images and put it aside.”

To me, descriptions like this are maddening because I want to know what the books look like, down to the Latin titles and flaking blackletter and descriptions of the woodcut prints.[5]  I’d rather draw the conclusion that these are evil books when Sarah notices the goat-legged Baphomets and Azazels cavorting in the margins than be told outright.

[1] Some highlights of the list include: conch, wood grubs, sea urchin, and camel.

[2] The Girl from the Blood Coven shows us the night of the massacre and serves as a teaser for the novella.

[3] I loved one part, though, in which Casey thinks about stealing some jewelry but stops, reminding himself that he’s a treasure-hunter, not a thief.  Either this was a shoutout to Final Fantasy VI, or I just revealed what a massive geek I am.  Or maybe both.

[4] Though not always.  I like Kubrick’s The Shining more than King’s original book because it cuts out so much of the (kind of tedious and often not very revelatory) character development.

[5] Also, “How to Summon Evil Spirits” sounds too Necromancy for Dummies to me. 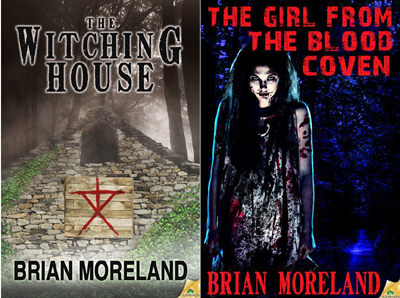