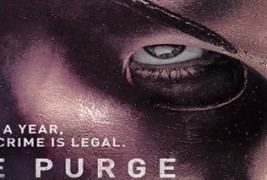 Buckets of blood don’t make for a great movie, but when you have a world in which one night out of the year everyone and their grandmother can rape, maim, and murder, you kind of want to see more of that kind of terror unfold on screen instead of just using it to add slightly more suspense to a home invasion thriller.

If you’ve seen the trailer or any of the clever ads promoting the film you know that James DeMonaco’s The Purge is about a new America made stronger by the annual nationwide bloodletting that allows people to “purge” all the hatred and violence they keep inside themselves.  This in turn allows for a better country with a strong economy and virtually no crime (except on purge night).

Ethan Hawke plays James Sandin the father of a well-to-do family in a rich neighborhood who makes a living selling security systems that fortify rich peoples’ homes who just want to hunker down during purge night and watch a movie with the kids while people are chopping off each other’s heads and raping their neck holes.

Ethan’s character has two kids, a 16-year-old daughter who’s basically the equivalent of Meg from Family Guy mainly because she ends up missing in the giant house for half of a movie in which a random and possibly violent stranger is known to be lurking about in the darkness.  But nobody seems to really care. Then there’s the idiot son who lets in a stranger who wanders into the neighborhood crying for help on the aforementioned night when you can literally eat another person’s face off their bones and go to work the next morning and joke about it. This kid sees this Luke Cage-looking motherfucker on the security monitor fully aware of purge night and still lets him in. If this kid had played Kevin McCallister in Home Alone he would’ve let in Harry and Marv and they would’ve had him chopped into pieces within five minutes. As everything goes from bad to worse in The Purge, I just wanted the angry uncle from Home Alone to say, “Look what you did now, you little jerk.”

Ethan’s wife Mary Sandin is played by a stylishly demure Lena Headey whom you might recognize as Queen Gorgo from 300 or the vicious drug queen who fancied skinning people alive in the recent version of Judge Dredd or certainly Cersei Lannister – the psychotic matriarch of the family currently occupying the titular throne on HBO’s Game of Thrones.  Here she plays a quiet and nervous modern wife which is a letdown. Considering her aforementioned background in fictional violence, I was hoping for a twist where she turned out to be a killer maniac.

The leader of the group of purgers who are all horny to “release the beast” (a purge society phrase that means “kill people”) on the man that Ethan Hawke’s idiot son let into their fortress and whom the purgers refer to as “homeless swine”. This prep school raver/homoerotic purge master (there’s a very sexy scene with lots of dripping nose sweat where he [SPOILER ALERT] stabs the “The Hawke” and gives him a kiss on the forehead) is your stock “stranger” – the weirdo that shows up at your door, or sneaks into your house with a bunch of other weirdoes in cheap masks to kill you because they like it.   For some reason this motivation comes off more childish than creepy, and maybe its because I grew up with killers that wore cheap masks that could back up their lack of costume flare with a dash of pure evil, but these “knock-knock-we’re-here-to-kill-you-and-your-family” type characters only worked once in my opinion and that was in The Strangers.  It’s much less acceptable to me personally than, say, a man with knife fingers who can only kill you while you dream.

The Purge is not terrible. It does do a good job of holding the audience at the edge of their seats, and maybe it was just the fact that the theater where I viewed The Purge was packed with people trying to find something to do while the sky was purging itself of the tears of a million angels (raining), but the crowd was like something out of a test screener’s wet dream. They were “ooo-ing” and “ah-ing”, jumping and screaming, chattering and even whooping and cheering when just a little bit of “The Hawke” came out and let his feathers flutter.

[SPOILER ALERT] He’s more Ethan than Hawke (Please refer to the pictures below to understand this rating system a little more clearly).

When you get the right balance “The Hawke” flies free, and you get movies like Training Day. 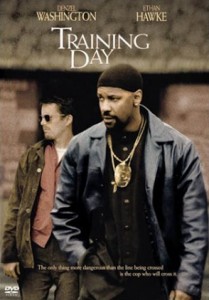 When you get more Ethan you end up with whatever the hell this movie is about: 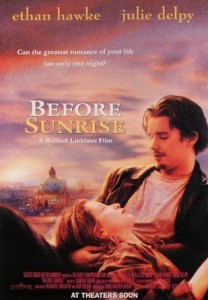 He’s not 100% Before Sunrise Ethan, but in The Purge he’s not much of “The Hawke”, which is disappointing. I was going into this movie hoping for “The Hawke” to fly free and dig his talons into the hearts of the audience. I wanted something more from this movie than a slightly crazier version of Trespass starring Nick Cage.  In fact, if there’s a The Purge 2: The Purging it should just star Nick Cage on the streets in the middle of purge day slicing open throats. Credits. Fin. 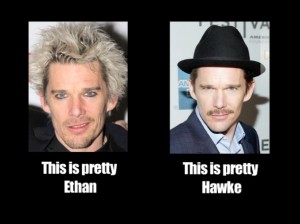 Recently, Ethan Hawke has been in three horror/thriller movies starting in 2009 with DayBreakers, then last year’s Sinister and now the The Purge.  It doesn’t seem like the creators of these horror movies, especially those behind movies like Insidious, Sinister and The Purge are letting “The Hawke” soar. In other words, these movies seem more like softcore horror or horror-light. Horror for the every man, the guy who wants to take his date to a movie that will make her jump into his arms which is great for selling popcorn, but not so great if you’re looking to purge yourself of the typical mainstream crap.

“Purge” yourself during a matinee on a stimulus Tuesday, or “release the beast” at home whenever the movie makes its way to Netflix or a Redbox near you.