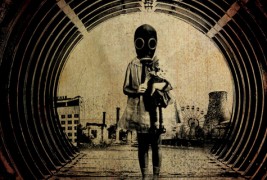 Resident horror humorist Billy Boyce is back with his take on…

Director Brad Parker’s (based on material “from the pen” of the aforementioned Mr. Peli) Chernobyl Diaries is about six bubbly backpackers traveling abroad to places where people will think you’re cool if you tell them you’ve been there. Once they arrive, the alpha male has an idea to take an extreme tour to a real ghost-city, Prypiat, a town hoisted to house the employees of the Chernobyl Nuclear Power Plant back in 1970. The film is shot in Serbia and Hungary, as to not hurt the cast and crew with radiation poisoning, as Prypiat will be polluting the lives of thousands, for hundreds of years more… Oh.  Dear. God.    Just.     Like.        This.            Film.

“Uri”, your stereotypical Russian soldier and tour-guide, pops the kiddies into a van, and whisks them away to the bland city. They only have a couple of hours to explore due to the juice, so Uri points them to some tear-jerkin’ spots on the reservation, showing them the human side of the devastation. In one of the houses they travel to, Uri, away from the group, finds something confusing and decides that the tour is over. All back in the van and ready to ‘dosvedanya’, Uri tries to start the van, but this being a terrible horror flick… it doesn’t start. Something has entered the van and “chewed” the wires.

This movie was reminiscent of a soccer game between two-year-olds. Just a bunch of kids running around, with no order, lickin’ on each-other like a group of….well, toddlers, I guess.  I can’t believe somebody read this script and said, “Yes, this will work.” Because, no…. No it does not. There was no creativity on any level of this film. We have the same group of stupid American characters. We travel to the same cliché, out of the way place. Someone gets hurt. They split up to get help. Shit goes awry.  REALLY?  We can’t do any better than this anymore?  You can actually assemble this movie cut for cut using clips from other, much better movies. Peli and crew relied on static cameras to do the work in the Paranormal Activity series which was fresh, and worked brilliantly. However, Brad Parker seems to be clueless here, when it comes to shooting with actual cameras.  There is no substance — not through direction and not through writing.

There’s no discernible plot, either. When I walked out of the screening, I thought to myself, “What the fuck did I just see?” Answer: Nothing. There was no meat on this bone.  There were some bleak revelations of plot that give you only a vague feeling that there’s much more going on than originally implied, but there’s no satisfying moment when it all comes together.  It was frustrating as well as exhausting to watch.

In short, this movie is severely flawed — not by a couple of plot holes, but by a thousand little scratches.  From writing, directing, set design, continuity, art direction, costume design, etc., to no apparent communication with a composer whatsoever, this movie is problematic. Take a pass on this one, in the theater as well as in life.

The only good thing I can say about Chernobyl Diaries is that it doesn’t cause cancer.