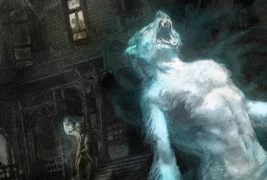 It’s true. The longer you live, the more you see how culture waxes and wanes like the changing of the tides. One decade’s movie star becomes the next decade’s has-been. At one time Rudolph Valentino was the most famous man on the planet. Now, few under 50 will know who he is.

So it is in the literary world as well. The popularity of authors rises and recedes. In this cobwebby corner of reality, we deal with those creators who are obsessed with horror and the darker side of existence. Today, I’m going to poke around in some forgotten corners of horror and try to bring light to those who time seems to have passed by.

The name of Seabury Quinn will bring a flurry of quizzical looks from all but the most knowledgeable horror fans. But this author was once one of the giants in the field of horror fiction and his name sold more copy than Lovecraft, Howard and Bloch combined. Quinn was a lawyer, a journalist and a survivor of the real life horrors of the first World War. But above all, he was a writer and an incredibly prolific one. He wrote for a huge number of the “pulps”…cheap, exciting magazines full of lurid tales.

Weird Tales was the king of the horror pulps and spawned a reputation which persists now. It launched the careers of H.P. Lovecraft, Clark Ashton Smith, Robert E. Howard and many more. But it was Seabury Quinn who was the king of Weird Tales.  His name was on more covers than anybody else, and by a wide margin. When the public at large picked up a copy of the magazine, chances were they did so to read one of Quinn’s twisted tales.

And of all Quinn’s creations, none were more popular than his hyperactive French detective Jules de Grandin, the Hercule Poirot of supernatural sleuthery. De Grandin first appeared in the 1925 story “The Horror on the Links” and closed his final case in 1951 with “The Ring of Bastet”.  All told, he starred in a staggering 93 separate stories during that period, making him by far the most popular character to come out of Weird Tales. Yes, that includes Conan the Barbarian and any of the other protagonists created by Robert E. Howard.

But over the years, de Grandin…and Quinn…gradually disappeared from view. Quinn died in 1969 after one of the most prodigiously productive careers in weird fiction. Occasional collections of the de Grandin tales such as “The Phantom Fighter” and the “Collected Editions” appeared to keep the flame alive but whether it was due to changing taste or other factors, Quinn had become eclipsed by the works of Lovecraft, Howard and Smith.

Now the cloak of obscurity is going to be lifted by Night Shade Books. They have an ambitious plan to release every de Grandin tale ever told, in a series of five large volumes. And the first of these volumes, “The Horror on the Links: The Complete Tales of Jules de Grandin, Volume One” I now hold in my sweaty and trembling hands.  It’s quite a handsome looking book. It features all the De Grandin stories from 1925 to 1930, exactly as they originally appeared. There’s also a very informative forward by Robert Weinberg (who sadly passed away shortly after the omnibus was finished) that gives you the background of Seabury Quinn and his most famous creation.

De Grandin was a brilliant detective who was a member of the French Surete and a graduate of the Sorbonne Academy. Quinn describes him as a blond-haired Frenchman with a pointed mustache that would “twitch like the whiskers of an excited tomcat” when he was hot on the trail of an evildoer. He also had an icy blue-eyed stare that he trained on those who aroused his ire.

Seabury Quinn was a product of his time and his writing was certainly not what one would call politically correct. Characters were often a collection of ethnic clichés, including de Grandin himself. He was so over-the-top French that he made Pepe le Pew seem like a Brooklyn cabbie. His dialogue was bursting with colorful French epithets and he often referred to himself in the third person: “Morbleu, this devil, he shall not get the best of Jules de Grandin!” As you read Quinn’s collected tales, the speech pattern is at first amusing, then becomes wearisome and finally an accepted and familiar quirk.

De Grandin was not the first detective specializing in solving supernatural cases…Algernon Blackwood’s John Silence and William Hope Hodgson’s Thomas Carnacki preceded him…but he was certainly the most active. A resemblance to Agatha Christie’s immortal Hercule Poirot is unavoidable, but where Poirot battled cunning human killers, de Grandin would find himself up against ghosts, demons and werewolves.

His approach to these weird cases was unique. He would use the logic and science-based training of a master detective first and resort to supernatural measures only as a last resort. De Grandin would first fire a pistol at his enemy before throwing holy water or chanting a protective spell. His keen mind first tried to find a rational explanation of events, but his acceptance of the supernatural was absolute. He had a limitless knowledge of occult practices from around the world. In the story “The Poltergeist,” he uses hypnotism and dances around with mistletoe in an attempt to exorcise an evil spirit from a girl’s body. 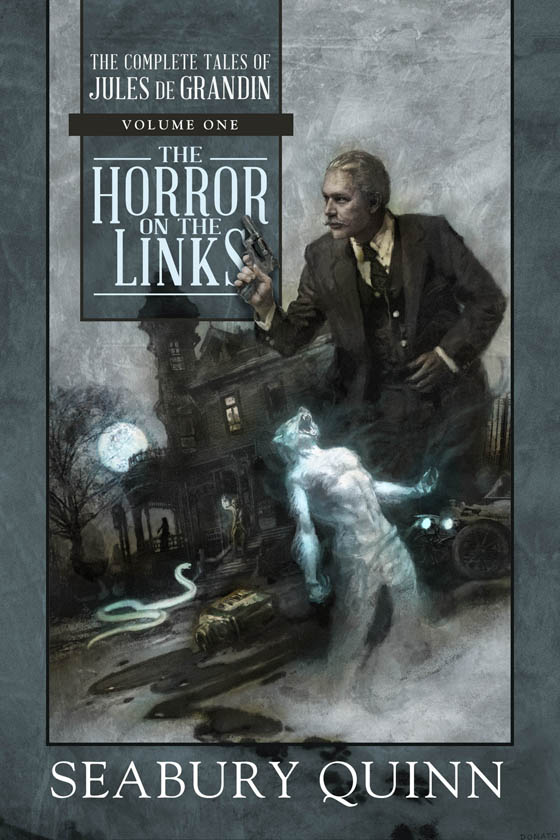 De Grandin’s sidekick during his cases and the narrator of the stories is Dr. Trowbridge, the Watson to de Grandin’s Holmes. Trowbridge is a general practitioner in the fictional town of Harrisonville, New Jersey, where much of the action takes place. Trowbridge is a remarkably dull and stupid character throughout and very slow to accept the fantastic. Even after encountering untold wonders and horrors alongside de Grandin, he seems unable to accept the supernatural explanation of events. He’s not an interesting character at all, but perhaps his dullness magnifies the energy and keen wit of de Grandin.

It’s the energy and sense of forward momentum that makes these stories so easy to read. Quinn was not the greatest wordsmith ever, but he imbued all of the de Grandin stories, even the lesser ones, with a brisk pace and no dull moments. He wrote in the pulp style that made the tales of The Shadow and Doc Savage, but with more refinement. He didn’t have the archaic phrasing of Lovecraft or the intense poeticism of Clark Ashton Smith, but he kept things zipping along.

De Grandin himself could be rude, condescending or ice cold, but he was bristling with energy, He was also incredibly fearless and threw himself into dangerous situations with hardly a backwards glance. In “The Curse of Everard Maundy,” he engages in combat with a zombie wielding an axe, brandishing only his sword cane. Most of the time, the little Frenchman was quick to first use a revolver against his foes before resorting to spells and incantations. You got the impression that he investigated supernatural dangers chiefly as a way to dispose of excess energy.

In the five years covered in “The Horror On The Links” de Grandin and “Friend Trowbridge” find themselves in a dizzying array of fantastic situations. In the very first case of “The Horror on the Links,” the duo confront the ape-men monstrosities created by a mad scientist. The next tale, “The Tenants of Broussac” is a wholly supernatural story that sees de Grandin fighting a malevolent ghost that takes the form of a giant snake. “The Island of Missing Ships” is a real anomaly that reads even more like a lurid pulp adventure than usual: de Grandin and Trowbridge are stranded on a tropical island ruled by a maniacal cannibal and his pet killer octopus!

The remaining stories see menaces such as a disembodied hand, a cult of Egyptian fanatics, a Romanian vampire count and a female werewolf enter the fray. Often de Grandin comes to the rescue of a beautiful woman who is being victimized in some way. Always he applies his keen combination of scientific observation and occult knowledge to the case. Occasionally, he unmasks human fraudsters using the supernatural to fleece their victims. “The Great God Pan” and “Mephistopheles & Co., Ltd.” are two such cases which are almost Scooby Doo-like when it comes to revealing the villains.

The stories are highly variable in quality. Some are very cleverly set up; others are more pedestrian in execution. Then there are some stories where Quinn injects a shock of gory and repellent violence into the equation. I was literally dumbfounded after reading “House of Horror,” which contains a description of human mutilation so grotesque that it surpasses most so-called “sick” films of later years. In this story, de Grandin and Trowbridge spend a night in a house where the seemingly respectable doctor owning it conceals a hideous secret. And I mean, HIDEOUS! Almost as shocking was “The White Lady of the Orphanage” where our heroes discover a maniac who devours children. The scene where they burst into the kitchen of the cannibal killer is unforgettable horror!

These occasional scenes of great violence and perversion reveal Seabury Quinn as having a pretty demented mind when he wanted to. In fact, one wonders how de Grandin and Trowbridge can even sleep at night, much less stay out of a sanitarium, with all the wonders and horrors they have witnessed!

Quinn also showed a more sensitive side in the story “Restless Souls” – a moving tale of love that lasts beyond the grave. Considering that “Horror On The Links” is just the first of five volumes, one wonders how many other weird terrors the fearless Frenchman encounters!

Once again, the stories are to be read with a large dose of historical context. Ethnic characters are described very broadly. The Irish in particular seem to be right out of the Lucky Charms school of broad characterization. Sometimes this is mildly annoying, but occasionally it reaches disturbing levels. It’s pretty obvious that de Grandin…and Seabury Quinn as well…has the utmost contempt for East Indian culture and civilization, which comes out full-bore in stories like “The Vengeance of India” and “Ancient Fires”. This aspect of Quinn’s writing is sometimes hard to overlook.

There’s no doubt that Night Shade Books has done the horror community a big service with “Horror On The Links” and further collections of Seabury Quinn’s tales of Jules de Grandin. They help to fill a huge gap in horror history by bringing a forgotten author and his greatest creation back into the light. The next collection of de Grandin tales will be entitled “The Devil’s Rosary: The Complete Tales of Jules de Grandin, Volume Two” and will be out September 5, 2017!

One thought on “The Horror on the Links: The Complete Tales of Jules de Grandin, Volume One Book Review”