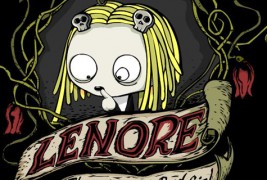 You might not sing a paean in honor of Roman Dirge’s Lenore comic book series, but you won’t sing a “dirge in upraise” after you’ve read it either.

Lenore: The Cute Little Dead Girl is a macabre, blackly comedic horror comic created by magician/artist Roman Dirge and inspired by the poem “Lenore” by Edgar Allan Poe (hence the lame jokes in the intro).

Vol. 5 of the color deluxe hardback edition entitled Lenore: Purple Nurples has just recently hit the shelves from Titan Books and it follows the adventures of the titular character and her undead monster pals: a nervous and battered stuffed doll named Raggamuffin, a short and helpful little demon named Pooty and a serial killer caretaker named Mr. Taxidermy.

Unbeknownst to this writer, Lenore has been around since the ‘90s having made her first appearance in Xenophobe magazine in 1992, and soon after that she was featured in her own series produced by Slave Labor Graphics, the same title that produced Johnny the Homicidal Maniac. If you’re a fan of psycho horror cartoons and comics and a fan of Johnny the Homicidal Maniac (the two kind of go hand-in-hand), then Lenore: The Cute Little Dead Girl is right up your alley. Think of Lenore as Johnny’s demented undead little sister, and if you’re just picking up Lenore: Purple Nurples Vol. 5 for the first time you don’t need to know any backstory to get into the comic. It’s an easy read devoid of any complicated canon and it’s chalk full of ridiculously dark jokes like any good comic strip.

This color deluxe hardback edition of Lenore personally put together by creator Roman Dirge and published through Titan Books has four chapters that showcase random shorts featuring Lenore and her band of monsters and undead friends.  It also includes bonus pinup art and bonus covers. It includes a brief introduction by a friend of Roman Dirge named Clint Blackwood—the unintentional creator of one of the characters featured in Chapters 1 and 2—who describes Roman as a dangerous but good-natured bar brawling loose cannon. This is important to remember because knowing that the artist of the comic is some kind of maniac makes the fact that you’re reading about the exploits of a “cute little dead girl” all the more enjoyable and bizarre.

Chapters 1 and 2 are parts 1 and 2 of a two-parter called Beware the Creepig Creeping about an unholy, tentacle-backed, monster pig that’s the vengeful embodiment of pork gluttony and will stop at nothing to kill Lenore after she eats a bacon wrapped pork tenderloin before bed. Chapter 2 is the action-packed conclusion where Lenore’s demon friend Pooty summons his dark powers from heck (hell) to try to stop the Creepig in one of the “greatest epic battles ever seen.” I won’t divulge any details about that battle, and though I detest the use of the term epic as modern hyperbole, any battle scene with pterodactyls strapped with Gatling guns is pretty fucking cool.  Chapter 3—The Dweller in the Fridge, is about what at first glance can only be described as a creepy arm-thing keeping Lenore from making a sandwich while her doll Ragamuffin and the demon Pooty kill clowns and search for Lenore’s lost blanky. Chapter 4—King for a Day gives you a random glimpse into the backstory of Mr. Taxidermy, a serial killer and caretaker character who looks after Lenore (picture below). If you’re a fan of the Lenore comics you’re probably already familiar with him, but first-time readers will catch cameos of Mr. Taxidermy in the previous chapters before more light is shed on his role in Lenore’s world during Chapter 4 where he helps Lenore steal $46,000.00 from a bank so that she and her friends can give a botfly (which only live for 24hrs) the best day of its short life.

This comic is the kind of cartoon or comic strip you’d imagine Wednesday from the Adams Family or Eddie Munster reading in their daily newspaper for a chuckle, “Look mom; Lenore summoned a frog and a witch made of spam to kill a killer tentacled pig monster!” (That’s something that actually happens in Chapter 2)  Roman Dirge’s crude art and off beat sense of humor make for an entertaining blend of creepy, kiddy horror mixed with general cartoon absurdity. To get a better idea of this style, check out one of the Lenore web shorts below created by Roman Dirge.

Buzz on the web claims that Neil Gaiman may be helping Roman Dirge produce a Lenore animated feature.

When reading Lenore: Purple Nurples think of it as a wacky horror cartoon show similar to Invader Zim only creepier, or a grungier more macabre version of Foster’s Home for Imaginary Friends.  If you’re not into those types of cartoons or modern comic strip humor then Lenore is probably not for you.

Lenore: The Cute Little Dead Girl comic series probably won’t interest you if you’re the type of comic book reader who’s looking for something mainstream and melodramatic (not that there’s anything wrong with that), but if you’re looking for a fun and delightfully unusual, light-hearted read then Lenore: Purple Nurples or any of the other Lenore color deluxe editions by Roman Dirge will certainly satisfy.  They’re great comics that’ll sneak up behind you and split your sides open when you least expect it.