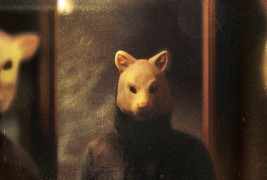 Comedian and horror aficionado, Rob Hibbs breaks down You’re Next….

You’re Next: I’m Not Sure What This is Supposed To Be? (mild SPOILERS ahead)

You’re Next may have some devout horror fans wondering what’s next for independent horror movies.

You’re Next was indie-made in 2011, and for the last two years it’s been gaining critical praise and admiration from audiences throughout the festival circuit. Now, it seems the average movie-goer is jumping onto the You’re Next bandwagon with the majority of audiences hailing it as a brilliant new take on the home invasion horror movie, and critics from top newspapers and media outlets across the US are giving it “mad props.” At present, it boasts an 80% freshness rating on Rotten Tomatoes from critics and a 73% freshness rating from users (a percentage that may drop drastically once more horror fans make it to the theaters, but who knows?).

Whether you’re a fan of home invasion horror/thrillers or not, You’re Next ambitiously attempts to bring a new twist to the home invasion concept and manages to find new tread on old tires by giving the film a retro-slasher/indie feel along with a novel gimmick: what if one of the victims was actually a survival expert?

The opening scene does a great job of setting the cinematic tone of the whole film while dousing you with just a hint of ‘80s nostalgia during a quick sex scene before the barely suspenseful demise of the topless girl and her lover which is set to an obscure late ‘70s song before a blood spattered title splats onto the screen oozing the words “You’re Next” (Find out why director Adam Wingard chose this song in his interview with FilmSchoolRejects).

The meat of the story (if you haven’t already heard) is centered on the Davidson family who are celebrating their wedding anniversary at their isolated country home. The Davidson children, older brother Drake, middle child Crispian, Felix, and younger daughter Aimee, bring their significant others along for the weekend and shortly after some character exposition, and right as the whole family starts dinner, the murder fest begins.

When the crossbow arrows start flying, and the Davidson’s start dying, Crispian’s Australian girlfriend, Erin, snaps into survival mode and keeps a cool head while others are getting theirs hacked off.

Erin changes the whole dynamic of the film and makes You’re Next stand out against the standard home invasion plot that usually pits killer psychos against clueless victims by giving the survivor girl character a background growing up on a survivalist camp on the Australian outback headed by her paranoid father.

The main reason people seem to be digging this movie is because they love Sharni Vinson (who according to IMDB has just signed on to be a part of the female Expendables). She plays the part of badass survivalist/leader pretty well and is more than admirable as an opponent for the small group of killers stalking the Davidsons, and if that weren’t enough, she also has the best kills in the movie turning the end of the flick into an R-rated version of Home Alone. The sinister blood-stained scrawl of “You’re Next?” found throughout the victims’ house should really be changed to “Who’s Next?” once Erin starts going on the offensive.

I will not spoil the creative, albeit underwhelming and almost soap opera-like twist to the story. The acting by most of the cast comes off odd and stilted at times with characters giving a little too much story away in their dialogue and turning archetypes into stereotypes with older brother Drake played by filmmaker and mumblecore advocate Joe Swanberg who plays the part of asshole a little too well (even though his performance is funny) and younger brother Felix “the scumbag”(who was in Choose?) dropping a little too much foreshadowing by telling everyone about cell phone jammers and how much you can buy them for online whenever everyone’s cell phones stop working. The acting and setup is so bad in the beginning of the movie that it comes across like an absurdist dark comedy, but to be fair, what horror film that we’ve grown up with doesn’t have absurd scenes with characters we love to mock? Halloween has women in their mid-30s playing teenagers. Loomis is overdramatic (to put it lightly).  Friday the 13th has Kevin Bacon.

Before the blood and guts start spewing all over the screen, the film almost seems like an elaborate parody of an Unsolved Mysteries reenactment. Maybe it is. Maybe that’s its genius. Either way, I was almost expecting the ghost of Robert Stack to appear in the middle of the film and reveal that he really invited everyone to the mansion to create more Unsolved Mysteries by killing them all and fleeing back to the underworld. 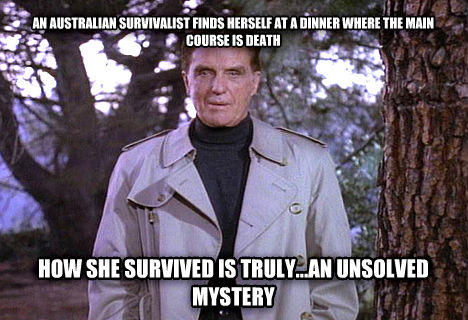 You’re Next may have a kitschy feel with its ridiculous characters, wild gimmick and unusual soundtrack, but it comes across more like a fantastic student film that’s an homage to late-‘70s/early-‘80s flicks like Straw Dogs and Last House on the Left or When a Stranger Calls but not a great theatrical release. It has the potential to be a cult hit, but don’t get lost in the hype, horror fans, because despite some stylish kills, a novel take on the home invasion subgenre and a decent cast (or at least one decent actress and the bad guy from Kingpin [no, not Ernie McCracken—this guy, the old skunk-head, scumbag, underground-bowling-gambler-boyfriend and the bartender in Dumb and Dumber from this scene), this movie could be considered a watered down version of The Strangers with a plot twist that almost seems melodramatic enough to be stolen from an old season finale of Days of Our Lives, but again to be fair, what great horror movie doesn’t have a melodramatic twist? Friday the 13th: the killer was actually Jason’s mother. Halloween: Laurie Strode turns out to be Myers’ sister.

You’re Next is a decent horror film, but nothing spectacular. It’s like a slasher film-light or a slasher film dumbed down (if you can believe that), or like a simplified version of any of the aforementioned home invasion movies with a hook that makes it easier for people to digest some of the horror nastiness that unfolds on screen in what can only be assumed as an attempt to placate to a more general audience.

There’s nothing wrong with playing to the crowd, but I feel like the general audience they are trying to intrigue are teenage couples and causal horror movie watchers who’ve probably never given most slasher flicks a real chance in the past and are now suddenly enthralled by the very same themes most avid horror fans have grown weary of, which in the end, may get the filmmakers of You’re Next more money and success compared to having produced something slightly higher in concept with a greater level of grotesquery. This is almost like the Paranormal Activity of slashers. It’s not really scary or super gruesome, but it can be fun especially if viewed by the right crowd.

It also boasts a decent soundtrack. Aside from the creative refrain of Dwight Twilley Band’s 1977 hit “Looking For the Magic,” the instrumentals of the film effectively add to the suspense in most of the scenes that are building to murder and mayhem by using a unique blend of tension-inducing electronic tones instead of relying solely on standard rumbling bass and a sudden shriek before a cheap scare.

You’re Next is a midnight movie that’s BHFH (By Hipsters For Hipsters) and that ambitiously attempts to breathe new life into the home invasion horror subgenre with a few creative concepts and one interesting character in a cast of awful ones that are fun to mock. This film would be best enjoyed as a late showing with a hot date or streamed on Netflix and watched with a few close friends rather than as a must-see theater experience unless the theater you go to is full of You’re Next fanatics who are into the movie. 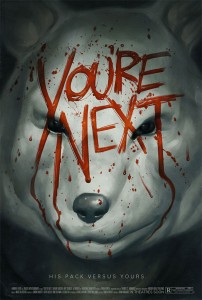 2 thoughts on “You’re Next Movie Review”