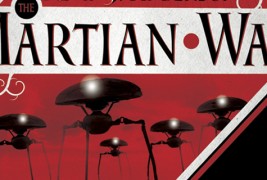 The Martian War: A Thrilling Eyewitness Account of the Recent Invasion As Reported by Mr. H.G. Wells and an even more thrilling and sensational review hot from the yellow presses and beamed across the whole planet through wacky wires and banshee screams by Mr. R. J. Hibbs in association with the good people at Ravenous Monster….

Honest Abe’s vamp killing and trick choo-choo trains got nothing on H.G. Wells and his demented band of genocidal bio-bombardiers who give the blood thirsty squids of Mars what for by having them suck on some ass kicking with a little spice of cholera in Kevin J. Anderson’s The Martian War (Titan Books).

Written by pro-author, master collaborator and sci-fi elaborator Kevin J. Anderson (KJA) of Dune Prequels’ and Star Wars comics fame, The Martian War is a historical sci-fi/fantasy fiction story that’s a cross between a retelling of H.G. Wells War of the Worlds and an unofficial pseudo-biographical account of what inspired H.G. Wells’ classic sci-fi stories.

After witnessing the corpse of a Martian delivered in person by its destructor, Dr. Moreau (the one from The Island of…), H.G. Wells, his wife-to-be Amy “Jane” Robbins, and his former professor and mentor, outspoken Darwinism advocate, T.H. Huxley (who’s impressive side burns can be seen here) are forced to take action.  They end up traveling from Earth to the Moon, and eventually to Mars, to stop an impending Martian invasion with a few vials of cholera and a little old fashioned can-do attitude.

KJA does an impressive job telling the story in the same style, format and language of an early 20th century writer while somehow keeping the plot moving along as briskly as a modern sci-fi action movie. He also successfully combines a lot of the worlds and characters in H.G. Wells’ novels into one universe along with a couple of important men from history who now can be officially ushered into the canon of pop culture to be mocked by hipsters.

Maybe now people will take my Sir James Bazalgette T.V. series seriously, or I can finally get some investors for Teddy Roosevelt Mummy Maimer. 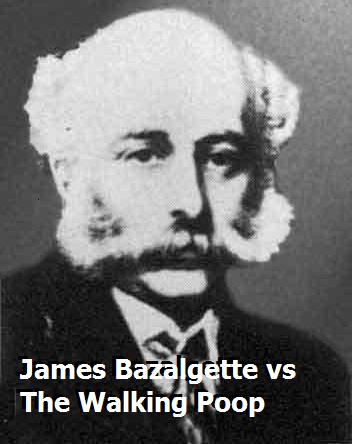 In The Martian War you of course have the squid like Martians from War of the World’s along with their tri-pods and death rays, but you have a more in-depth  look at them through the detailed firsthand accounts scribed in the journal of Dr. Moreau (from The Island Of…).  Moreau writes of his experiences with famous astronomer and Mars canal fanatic, Percival “Sweet First Name” Lowell, after the duo captures and studies the first Martian tentacle head they find clinging to life in a scout ship that crash-landed on Earth.

Along with the Martians, you have the insectoid Selenites (latin for moon people) from The First Men in the Moon who are the first victims of a Martian invasion that nearly eradicates them from the lunar surface, and there’s even a secret lab of mad scientists commissioned by the Queen of England to develop advanced weapons in preparation for the first World War.  They’re led by T.H. Huxley with the treacherous and homicidal Dr. Griffin from The Invisible Man working on his infamous invisibility serum, and Mr. Bedford and the eccentric Mr. Cavor from The First Men in the Moon who develop cavorite super armor that’s “opaque to gravity” or, in other words, weightless.

Sci-fi fun and fancy aside, The Martian War like any classic “scientific romance” has an eerie ominous feel, and the few suspenseful and horrific scenes that would most interest horror readers would be:

With the amount of historical research and the creative infusion of H.G. Wells’ classic characters, you don’t have to be a scholar of early-20th-century literature or a hardcore sci-fi fan to stay interested in what’s going on in the story.

KJA does a great job of making the period come to life and given his extensive background as a sci-fi author ranging from comics to novels (most notably the penning of the Dune Prequels and The Last Days of Krypton) he knows a thing or two about re-inventing beloved characters and bringing alien landscapes to life.  The proof is in the pages of The Martian War—a book that is truly out of this world (zing). 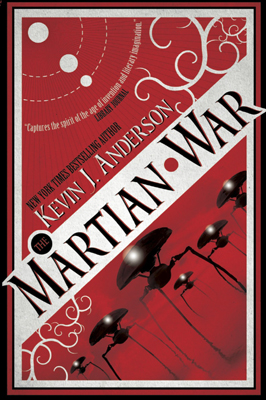