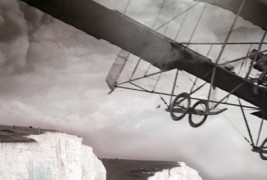 There are many Sherlockians out there right now. Frankly, it’s a Sherlockian world, and the tremendously popular BBC series isn’t showing any signs of letting up. I remember once speaking to an English professor that I respected about how certain writers come in and out of fashion. My case in point at the time was G.K. Chesterton, who is still undergoing a resurgence in popularity thanks to the proliferation of paleoconservative Roman Catholics on the internet. The professor, I recall, nodded his head and sipped from his coffee before winking and saying: “Well, not everyone can be Conan Doyle.”

It’s true, it’s true. Sir Arthur Conan Doyle, a fan of mystery fiction who created Sherlock Holmes and Dr. John Watson while trying to make his medical practice in Plymouth successful, has enjoyed an uninterrupted legacy of popularity ever since 1887’s A Study in Scarlet. Unfortunately, because this popularity is so tied up in his two detective characters, a whole lot of people forget that there is even a pen behind the deductions. One is more apt to hear people talk about their appreciation for Holmes and Watson than for their creator. Worse still, there are many who still think of Holmes and Watson as real people, or at least the people responsible for the telling of their tales. Poor Conan Doyle is often squeezed out of the picture.

James Lovegrove hasn’t written one, though. Lovegrove, a New York Times bestselling author with a history of creating excellent science fiction, is at it again with this year’s Sherlock Holmes: Gods of War. In 2013, Lovegrove entered the Sherlockian fray with the excellent Sherlock Holmes: The Stuff of Nightmares (you can find what Ravenous Monster thought of it here).  Now, less than a year later, Lovegrove has returned to Great Britain’s most eternal detectives for another outré visit.

In Sherlock Holmes: Gods of War, Lovegrove takes the unusual decision to deal with Holmes and Watson during their twilight years. Rather than write yet another action-mystery adventure with young(ish) heroes, Lovegrove has instead decided to pen a dark, somewhat disturbing crime novel featuring two nominally retired old men. Sherlock Holmes: Gods of War takes place in the pivotal year of 1913—many years after Holmes has made the decision to retreat to the rural confines of the Sussex Downs. There, while not tending to his bees, Holmes tries to fight his ennui with the occasional local mystery. But, as things go in these stories, a new, more engaging mystery pulls Holmes and Watson back together.

At first, Gods of War presents a rather standard case: Holmes and Watson are called in by the jeweler Gervaise Barraclough in order to retrieve a missing set of pearls. Within some thirty pages, Holmes and Watson find the culprits—Jeremy Tremlett and a circus oddity named Reptilio the Human Cobra—and put them safely out of commission. This is, to say the least, anticlimactic.

Then the body of Craig Mallinson washes ashore.

At first, the death of Craig Mallinson looks like a fairly clear case of suicide. The young lad had recently been experiencing troubles at Cambridge, plus his father had voiced his disapproval over Craig’s choice of lover—Elizabeth Vandenbergh, the owner of the floundering Tripp’s Costumiers and a former “lady’s companion” in India. But, to Holmes’s eyes, the death of Craig Mallinson says something more than suicide.

In 296 pages, Sherlock Holmes: Gods of War tells a crackling-hot narrative that moves at a breakneck pace. In this space, Lovegrove manages to pack a lot of baggage. From pagan cults full of plutocrats to mentions of Aleister Crowley and the Indian death goddess Kali, Sherlock Holmes: Gods of War stands as a mystery novel with a sincere love of horror. Then again, the novel’s bugbear is the upcoming “Great War,” which has turned 100 this year. As a result, numerous British publications and a handful of American ones have been spending excessive energy on chronicling and recounting the First World War. Sherlock Holmes: Gods of War isn’t so much interested in the actual history of the war so much as it’s interested in the small role that Holmes and Watson played on the home front.

Ultimately, Sherlock Holmes: Gods of War does everything it sets out to do. The story is good, although it lacks the action of Sherlock Holmes: The Stuff of Nightmares. Conversely, while Lovegrove’s earlier outing bears traces of too many lessons learned from comic books, this latest novel feels more authentic—more true to its characters. Oh, and Holmes’s dig at Poe’s Monsieur Dupin (“my methods are far subtler and neater than Dupin’s ever were…The man was prone to supposition and flights of fancy.”) is a nice reference to Holmes’s earlier comments in A Study in Scarlet (“Dupin was a very inferior fellow….”). Obviously, Lovegrove has studied his Sherlock, and thank goodness that a real writer and a real good one has enough time to make something like Sherlock Holmes: Gods of War. 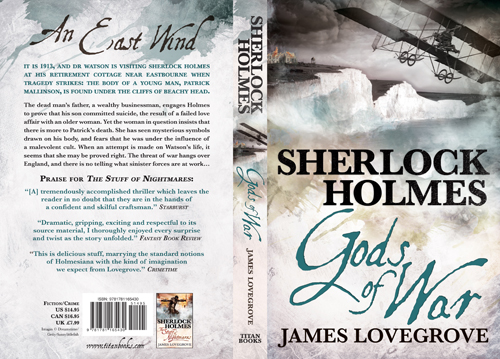