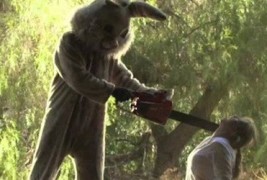 My friend Zach and I sat down to watch director Carl Lindbergh’s BUNNYMAN MASSACRE –sequel to the divisive film BUNNYMAN–some nights ago. Although I have not had the opportunity to see and, therefore, hold no opinion on the latter, I certainly feel like I’ve had enough of this series with the former. Ye Gods, enough, yes. As much as I had heard it talked up, ultimately, its sheer soporific effect made it difficult to even watch.

The film opens with a school bus full of children, a desolate locale, and Bunnyman with a chainsaw. One can imagine what follows. While violence against children is among the most deranged things in a good edgy horror movie, somehow, this felt as bland as bad wasabi. Sure, some delightful crimson sprays up hither and thither. A bit of screaming, a touch of humor. Then it’s over.

What follows this initial murderous spree is difficult to describe. Bunnyman terrorizes people, sure, but, beyond that and some “beef” jerky, the motives are unclear. The random killing could be entertaining, at least, if it were done better: more stylishly or humorously. One sees many shots of people who are supposed to be terribly mutilated and rent asunder by various methods of execution; rather than having that sought-after decimated look, they just appear comatose and covered in ketchup. Good on French Fries, not on actors. Zach and I both agreed that it would have been vastly improved had they simply left the results up to the viewer’s imagination.

The acting is, at best, overwrought and static. Bunnyman is played with all of the staid intensity of a rabbit fur coat mildewing in a humid closet. He menaces quietly, if standing awkwardly can be described as menacing anything at all. The familiar trope of the salvageable villain with The Damage comes up, however uninteresting this trope may be. Of the other characters, the best that can be said is that the Sheriff is fun to watch. Basically, yeah. That’s it. Everyone else just screams a lot and falls down quite often.

The film relies heavily on atmospheric creepiness. In this case, the atmosphere is probably Mercury’s: Weak, negligible, and made up of traces carried towards it from a superior celestial object. The first few minutes are simply old footage of quotidian stuff with vaguely creepy music, futilely attempting to force a sense of foreboding by doing the tired trick of showing old footage with creepy music.

Perhaps I missed something by not watching the first installment. I think not, honestly.

If one were so inclined, one could easily find better endings for this film on internet forums. Endings that actually would have been cool. Entire plots that would have been entertaining. I do believe I have had wandering daydreams waiting in the check-out line at Target that felt more substantial than this monstrosity.

Try though I might, it’s hard to really remember much about the movie itself. Bad CGI blurs with endless silly dialogue and inane chase sequences. A few scattered moments of tepid gore fail to recompense all that waiting for something awesome. Doubleplusungood indeed. 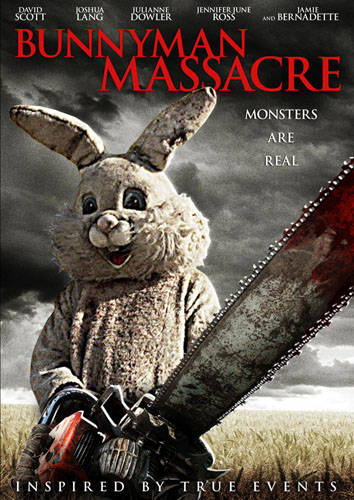