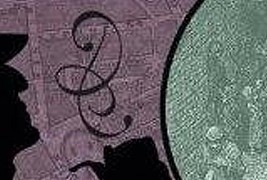 I love Dracula, but is there a more disappointing character in all of horror than Dr. Abraham Van Helsing?  Nobody does Cthulhu like Lovecraft.  Nobody does Conan like Robert E. Howard.[1]  Everybody does Van Helsing better than Bram Stoker.  Whatever idea you have of Van Helsing—shrewd scientist, badass vampire hunter, unparalleled occult expert—gets sunk pretty quickly once you start reading Dracula.[2]  By the time Van Helsing shows up, we’ve had a good chunk of page-time devoted to panicky mewling about our poor, sweet Ms. Lucy Westenra and her terrible wasting.  ‘Thank God,’ we think as the Doctor arrives from the Netherlands. ‘If there’s one person who won’t lose his shit over some idealized Victorian chick getting bled, it’s this guy.’  Van Helsing not only manages to lose said shit, but does so in the most annoying dialect this side of Jar Jar Binks.  He’s a masterful doctor, a veteran lawyer, and so well-studied that he can correctly guess the presence of an obscure Transylvanian folk monster in rural England; so why can’t he remember that it’s, “This very sweet lady is in grave danger” and not, “This so sweet lady is in grave danger?”

Loren D. Estleman’s Sherlock Holmes vs. Dracula: The Adventure of the Sanguinary Count (originally published in 1978 but recently reprinted as part of Titan Press’s Further Adventures of Sherlock Holmes series) begins with Watson ranting indignantly about how Stoker intentionally left out the contributions of a certain Baker Street detective to make his friend Van Helsing look better.  While this isn’t the first time Holmes has been matched against Dracula, it’s an inspired premise.  I was looking forward to a three-way rivalry, a Gothic The Good, the Bad, and the Ugly pitting Dracula’s supernatural power against Holmes’s deduction against Van Helsing’s occult knowledge.  The good news is that Estleman can write.  He not only does the Holmesian voice quite capably, but keeps the action suspenseful and spins some very effective scenes (the shipboard climax of the novel is especially well done).  The bad news is that the whole ends up being something less than the sum of its parts.

The Adventure of the Sanguinary Count begins with Holmes and Watson called to investigate the wreck of the Demeter.[3] Puzzled over the disappearance of the crew and the bloodless body of the captain, the mystery deepens as rumors begin to circulate of a madwoman, the “Bloofer Lady,” said to be preying on local children.  After crossing paths with the standoffish Van Helsing and Company, the pair ultimately run afoul of Dracula himself, beginning a dangerous hunt that takes on a very personal dimension for Watson when the Count targets his wife.  This is, by any measure, a great premise—and a difficult one to pull off.

Pitting a character as scientific as Sherlock Holmes against so nakedly supernatural a being as Dracula puts a special burden of accommodation on the writer: either Holmes has to believably accept the existence of vampires, or vampires must be shown to have some sort of rationale beyond that given by Stoker.  In Sherlock Holmes vs. Dracula, neither of these things happens, and Holmes’s transition from puzzlement over bloodless corpses to crucifix-wielding vampire hunter is never truly explained.  We’re simply left to accept that he pieced everything together behind the scenes.  The actual deduction—the crux of Doyle’s stories—is left disappointingly opaque.

Nor do we get much in the way of interaction between Holmes and Watson and the various characters from Dracula that appear in the novel.  Aside from the Count, most of them are just walk-ons—cameos that keep us in the framework of Stoker’s original plot, with a few Holmesian concessions.  Holmes and Watson encounter Van Helsing exactly once.  Mina Murray appears in a very brief interlude on a train.  Criminally, Renfield is never even mentioned.  What results isn’t a bad story—just one that feels a bit incomplete.  This, I think, gets to the heart of Sherlock Holmes vs. Dracula’s problem.

Sherlock Holmes and Count Dracula are about as iconic as two literary characters get.  Estleman acknowledges as much in his dedication of the book to Bram Stoker and Arthur Conan Doyle.  Any properly respectful writer of a book in which these two clash must be conscious of having a pretty big coffin (or deerstalker, as you prefer) to fill.  Like Guy Adams’s newer and equally competent but also somewhat disappointing Sherlock Holmes: The Army of Doctor Moreau (which I reviewed back in August), I think Sherlock Holmes vs. Dracula is perhaps a bit too respectful.  I believe Estleman’s Dracula and Holmes.  His instincts for the characters and setting—and for writing in general—are good.  I just wish he had trusted himself to do something a little wilder.

I’m dangling on the precipice of jackass critic mode here,[4] but I think that the best shared world fiction (whether it be Holmes, the Cthulhu Mythos, or whatever) attempts not so much to recreate the original but to simultaneously honor and reclaim it.  This is a scary thing to attempt, because most authors who write in shared worlds are themselves fans of the world in question, and nobody wants to be a byword for “canon-raping asshole” in their own favorite fandom.  Sherlock Holmes vs. Dracula: The Adventure of the Sanguinary Count is fun, well-written, and played too safe, but it is still fun and well-written.  And if nothing else, thanks to Mr. Estleman for showing us who really unraveled the mystery of Dracula—because I for one knew it couldn’t have been Van Helsing.

[1] Conan has some claim on being horror.  Don’t believe me?  Read some Howard.

[2] My favorite version of Van Helsing is Sir Anthony Hopkins in Francis Ford Coppola’s Bram Stoker’s Dracula, but even Hugh Jackman in the very forgettable Van Helsing improved on the original.  Fighting words, but I stand by them.

[3] The Demeter is the ship that initially brings Dracula to England in Stoker’s novel.  The diary of the Captain, chronicling the disappearance of his crew one by one, is one of the book’s more haunting episodes.

[4] So if I end up staked, vivisected, or told to put my money where my mouth is and write my own fucking Holmes book, I hereby indemnify and hold harmless Mr. Estleman and Mr. Adams. 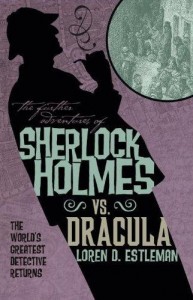