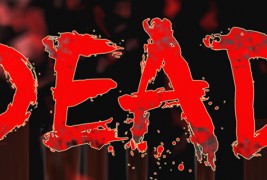 The review you’re currently perusing is the final installment of the DEAD Journal series at RavenousMonster.com.  The series, subtitled “Diary of an Indie Filmmaker”, is just that.  In early 2011, RavMon contributor Justin Hamelin brought to my attention his plans to direct his first short film entitled DEAD..  We discussed it and decided to document his experiences on the site.  Over the course of the entire production, including preproduction, the shoot, and post production, Justin wrote short essays describing his trials and tribulations.  After a year’s time and four essays, it all culminates with this very piece:  The Review!

DEAD. is a short horror film representing what happens in the ‘burbs during a zombie epidemic.  We watch as a neighborhood and its inhabitants descend into chaos and death by way of the zombie plague, or “the corpse flu” to be precise.  And in the interests of cutting to the chase and most likely lowering Mr. Hamelin’s blood pressure, I can say up front that as flawed as DEAD. is for reasons I’ll outline shortly, it works surprisingly well.

This review can’t offer much in the way of synopsis or analysis of the cast’s performances because Hamelin’s film, like most DIY maiden voyages, is mainly a means to an end that’s broadly achieved by the mere existence of a finished product.  The story aesthetic, the way in which the director represents the cast’s interpretations of the script as well as his own, is understandably a secondary concern.

However, having said all that, Hamelin’s movie delivers an atypically tight, comprehensible episode of zombie horror, a testament to his inherent gift of storytelling and a positive implication of his potential as a filmmaker.  The quality of DEAD. increases as the film plays out and every moment is unquestionably entertaining.  This obvious potential assures that subsequent projects will better emphasize storytelling for a number of reasons, not the least of which being that this novelty of having made a movie will no longer be enough to satisfy Hamelin.  Quality and attention to detail will become factors of increasing importance.

The look of DEAD., or Hamelin’s cinematography as it were, is surprisingly high-value.  This is doubtlessly achieved by shooting outdoors with natural light for a majority of the shots.  Mini-DV is cheap, and difficult to light, but sunlight reads nicely.  The miniscule size of the camera detracts a bit from shots that require movement as the handheld method is incredibly unstable with such a small camera, eliciting the sensation of being a guest passenger on the Discovery Channel’s Deadliest Catch.  Moreover, a quick search online yields plans for building a camcorder steady-cam rig for less than $10.00 as well as cheap, DIY versions of other typical camera rigs.  These resources enhance a film’s production value exponentially and for very little money.  So while Hamelin seems to have given certain elements of his production short shrift, putting the cart before the horse the way so many first time filmmakers do, his horse is pretty adept at pushing carts.

DEAD. has several obvious strengths.  Hamelin understands the way the camera narrates the story.  His shot selection, while crude in execution, works wonders for the tempo of specific scenes and for the overall pace of the entire movie.  The last half of the movie is shot with crackling kinetic energy and it translates to a truly exciting climax.  Another of the movie’s strengths comes by way of Hamelin’s makeshift cast.  The characters aren’t named in either the dialogue or the credits, but there are three actors in particular that are very good.  Oscar Elias and Arturo Lopez are fantastic as two janitors discussing rumors about the corpse flu as they walk the desolate hallways of the local hospital.  And Luis Estrada has a compelling look and a legitimate screen presence playing a man who leaves home to walk his dog in the park and ends up sleeping on top of some playground equipment to survive the night.  Finally, DEAD.’s soundscape is the most impressive technical element of the film.  The music Hamelin uses as well as the stereo mix he composes are a perfect fit and they greatly enhance the fright factor of DEAD..

The movie’s biggest flaw is the apparent lack of patience on the part of Mr. Hamelin – a problem that haunts the vast majority of first time DIY filmmakers’ movies.  This manifests in several ways, most of which have to do with the resultant production value.  There are several examples.  For instance, in the middle of a zombie apocalypse, cars shouldn’t be visible in the background leisurely driving down the street.  Another take sans the car is on order, if not framing the shot to omit the possibility of a car driving through the shot in the first place.  Also, many scenes would have benefited from better blocking so that the actors can hit their marks and the camera operator doesn’t suddenly have to zoom out or pan one way or another to keep the action in frame.  And the implementation of basic equipment, like lights for poorly lighted sets and a tripod to eliminate needless movement during static shots would increase the production value and thus the viewer’s enjoyment of and emersion in the movie.  But all of this stuff is superficial and easily correctable.  The movie works, shaky camera and all.

The ostensibly pie-in-the-sky theses of books such as Robert Rodriguez’s Rebel without a Crew and Lloyd Kaufman’s Make Your Own Damn Movie state that a formal education in the cinematic arts, money, and resources be damned; anyone can and should make their own movies.  While easily accessible technology, including cheap cameras and editing software that comes pre-installed on home PCs makes the broad intent of these books true, it doesn’t assure that any of these movies will be good or even watchable.

Good movies are usually realized by knowing what you’re doing in some respect.  And while Hamelin doesn’t have a plaque on his wall from Columbia or USC, or a bunch of high-tech equipment, he has an obvious intuitive understating of storytelling and how that’s supposed to look on screen.  So, there’s something to be said for the knowledge one can glean from being a passionate film fan, and Hamelin’s DEAD. is the proof.