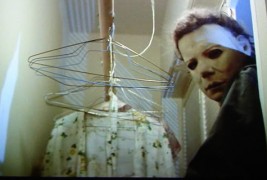 It has been 34 years since John Carpenter played that now infamous piano melody in a 5/4 time signature. Who would have ever thought that such a tune would strike fear into so many individuals? John Carpenter? Maybe. If he didn’t, I can’t imagine why he and a few others would have put so much time, effort, and money into the film’s inaugural voyage toward what most horror fanatics would call legendary status in the genre.

Can anyone compete with Michael Myers in the world of slasher films? Search within your depths of horror knowledge and I think your answer will be “no”. Michael was the perfect killing machine. Actually, I should say “is” the perfect killing machine since I don’t think we’ve seen the last of him despite the many demises in both sets of films. His body count may not have the numbers of Jason’s, but he’s still the best. Think of the traits Michael possesses: immeasurable strength, guile, and believe it or not, patience. What more can one ask for in a slasher?

In 1978, the independent horror film, Halloween was released in theatres and has been scaring the crap out of people ever since. It’s quite amazing really. The movie had a $320,000 budget which by today’s standards is mere chump change. Your top billing was Donald Pleasance. He had already had quite the acting career at the time according to the Internet Movie Database.  However, the cast was definitely not considered among the A list at the time and Jamie Lee Curtis was probably not even thinking about promoting yogurt that helps “regulate your digestive system” at that age.  Finally, the costume of the film’s antagonist, Michael Myers, probably didn’t cost more than $15 to assemble. Back then, a set of blue coveralls probably ran about $10 and the spray-painted William Shatner mask boasted a whopping $1.98 price tag. All things considered, this small budgeted horror film became an instant classic and sparked seven sequels and a reimagined remake with a sequel of its own.

The competition was and remains quite fierce. You have New Line Cinema’s brand of maniac in the form of Freddy Krueger along with Paramount’s own hockey mask wearing, loved by horror nuts, crazy-man Jason Voorhees (who was later purchased by New Line. They only bought the character. Paramount refused to sell them the name of their movie franchise that made them millions of dollars). Out of the three mentioned here, Halloween seems to be the only one to avoid the campiness that the other two franchises have fallen victim to in their sequels.

Looking back on things, there really is not a whole lot of gore in the original Halloween. Yes, of course there’s killing. There has to be in order for this to be considered a “slasher” film. There is no arterial spray, decapitations, or severed limbs in this movie; yet, the thought of it still terrifies viewers. People can add a personality to the competition and find a way not to be frightened. Jason is a lunatic wearing a hockey mask to cover his horribly disfigured face.  You can see some features beneath and around the mask to give him an identity sans the second movie where he only wore a potato sack. Freddy was a child molester who had all of the flesh burned off of his face and became an asshole in people’s dreams. He talks, has personality, and eventually starts spouting off one-liners like “Welcome to Prime Time, BITCH!”

When it comes to Michael though, he has no profile per se. The mask; pure white with no features and is not form-fitting in the least. It has been said that the eyes are the gateway to one’s soul. When the mask is on, you can’t see Michael’s eyes. That insinuates to me that there is no soul to be had. The clothes; blue coveralls that aren’t very revealing. The premise; kill your sister and anyone and everyone that gets into your way. It seems as if Carpenter is taking his own personal boogeyman and giving it a corporeal form. Most writers base their characters on aspects of their own lives or influential people they’ve come across through the years. I can’t say for sure if that’s the case for Michael, but it’s definitely conceivable and believable in one form or another. Am I right? It doesn’t matter. This franchise is still booming after 34 years and has kept adults and children alike checking their closets and beds for monsters every night.

You can kill Michael Myers as many times as you like in the movies, but he will always come back to life. When he does, it will always be with more vengeance and fury. He will also be taller, stronger, and stealthier. Will he know martial arts? God I hope not. Regardless, he will keep coming after you. Before you go to sleep at night, make sure your doors are locked and windows are shut. Check inside your closets, under your beds, and hell, check the garage while you’re at it. Don’t forget to look in the back seats of your cars, mini-vans, and SUVs. You just never know where Michael might be hiding…waiting…for the perfect opportunity to KILL.