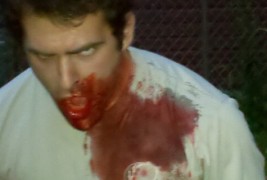 As yet another summer melts away, the realization that I have a pending film premiere in roughly three months is starting to set in. For me, the biggest challenges have been the most fun aspects of this process. There are still plenty of things to do before ‘DEAD.’ is ready to hit the projection screen in late October.

A small history lesson on ‘DEAD.’ is in order, I believe.

‘DEAD.’ first began filming in early November of 2010, with a cast and crew made up almost exclusively of co-workers. The script deviated big time from the original short story I’d scribbled out and from the first day of filming to the last, I was forced to compromise scenes and re-write key parts multiple times to accommodate fluctuating schedules and casting errs. Above all else, it was a very “fly by the seat of our pants” kind of project without much structure from me.

After about a month and a half of shooting – most of which came out fairly well – the film was pushed by the wayside, left to eat up space on our editor’s computer while I contemplated the next step. For a while, ‘DEAD.’ flat-lined completely, until I rewrote the script to keep it as close to the short story as possible back in February. Now, with a completely new crew and a clear, true vision of what I want to accomplish with this project, we have been rockin’ and rollin’ for nearly a month and a half now. 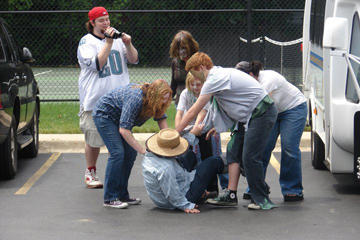 In my last entry, I mentioned how quickly an ant hill can become a mountain for a filmmaker. Well, it’s crunch time and I’ve got my hiking boots laced up.

The next step of this film project is editing. I’m fortunate to have been acquainted with an exceptionally creative and enthusiastic filmmaker who does real magic in front of the computer. Ryan Lane was also gracious enough to borrow me the cameras used to film ‘DEAD.’. He has a real talent and it’s a blessing to have such an awesome mind helping out with this project. 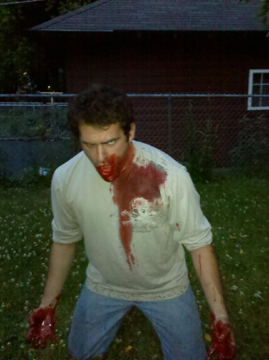 Once the editing is well on its way, I hope to have a few trailers available on Youtube sometime in mid-August. I know this will make the cast ecstatic and I’m really looking forward to hearing what people think about it.

Next on the to-do list is music. While most of the music and effects used in this film will come via software, I am also discussing some opportunities with a few friends who are musically inclined. I would love to be able to add my own touch to the soundtrack of this film and the fellas I’m talking with will allow me to do that.

Amidst all the post-production work, there are still a few scenes I’d like to shoot, particularly with my leading ladies. With conflicting work schedules, and personal lives not allowing the three gals to be on camera at the same time all that often, I’m hoping to get one more solid evening of shooting done with Eryn, Molly and Timika before we officially wrap this film. However, I’ve already gone through the tapes and decided that, along with a few quick add-in scenes, we can keep the film rolling along without these scenes if worse comes to worst. And as most indie filmmakers will tell you, that tends to happen.

I may sound a tad pessimistic here, but I truly hope that is not the case. I’m so excited to see how this movie turns out. I love the idea of toiling over the footage we have. I can’t wait for the finished product (hopefully ready to start distributing in September) but I am also amped up to do the work necessary to get it to that stage. These next two or three weeks will be crucial. 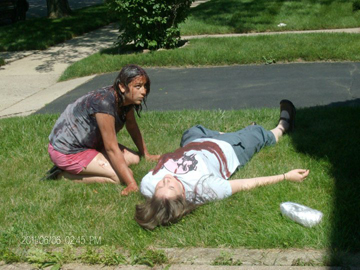 There are a few deadlines I face with a couple opportunities I have to show the film. I am very excited and humbled to have the chance to be showcased on something bigger than the 22” screen in my living room. I expect to have copies of ‘DEAD.’ to the interested parties by late August.

So as I sit here in Connecticut on vacation, still reeling from the weather yesterday (cloudy, rainy, 60 degrees), it’s never hit me harder that autumn is right around the corner. The coming weeks are going to be busy, maybe even a little daunting at times. That mountain seems to grow just a little bigger every day. But that’s OK, I’ve got my boots laced up and I don’t mind the exercise.