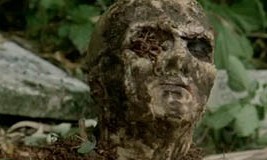 On October 25th, 2011 Blue Underground is slated to unleash the definitive edition of Lucio Fulci’s 1979 walking dead opus, Zombie (Zombi 2), and on Blu-ray no less!  This pending release provides an excellent opportunity for another entry into Ravenous Monster’s horror movie retrospective series.

Let’s talk about what Lucio Fulci’s Zombie is not.  It’s not controversial, the way Cannibal Holocaust is, nor is it ultraviolent the way Last House on the Left and I Spit on your Grave are.  It’s not particularly original – it’s both well established and obvious that it was meant to capitalize on the success of Dawn of the Dead which was known as Zombi in Italy, hence the original name of Fulci’s film.  Its most infamous gore shot is quaint by today’s standards.  So, why is this movie so highly regarded among horror aficionados?

I’ll get to that, but let’s first catch everyone up to speed.

Zombie begins when an abandoned yacht drifts into New York Harbor.  The boys-in-blue show up to see what’s what.  That’s when we realize that the boat isn’t abandoned; it’s harboring a stowaway who’s hungry for human flesh.  Below deck, a zombie bites one of the unsuspecting officers, ripping out his throat and killing him…sort of.  After the surviving officer dispatches our walking-dead friend into the water, the less fortunate officer is transported to the morgue.

Meanwhile, the police start sniffing around Anne Bowles (Tisa Farrow) because the yacht belongs to her father.  Anne’s confused because dad is supposed to be on a tropical island conducting research.  Enter reporter Peter West (Ian McCulloch) who’s trying to get the scoop on the boat for the paper.  Peter meets Anne while he’s scoping out the yacht and together they find a letter from Anne’s father stating that he’s on the island of Matool in the Caribbean and he’s been afflicted with a mysterious illness.  Naturally, Anne and Peter are hot for each other and, thus, embark on the trail of Anne’s father together.

Unsurprisingly, their island destination has a rather unique problem: the dead come back to life and eat the living.  Dr. David Menard (Richard Johnson) and his wife Paola (Olga Karlatos) have been living on the island while the good doctor tries to figure out a solution to said problem.  Paola is at her wits end and wants to check out, but Doc Menard’s in it to win it. And it’s not going to be easy: Zombie tension, marital tension, and the fate of Anne’s father, Dr. Bowles, are all groping at Dr Menard’s heels – yikes!

Once Peter and Anne arrive in the Caribbean they meet boaters Brian (Al Cliver) and Susan (Auretta Gay), who agree to help them find Matool.  Eventually, Peter, Anne, Brian, and Susan reach Matool and before long the walking dead swarm from every nook and cranny, killing most of our heroes and everyone else for that matter, save for Peter and Anne who escape by boat with zombie-Brian in tow as a souvenir of the nightmare from which they’ve escaped.  On their trip up the coast toward home, they hear on the radio that New York City has been overrun with zombies.

It’s during these climactic sequences when Zombie shines as the master work of horror it’s now considered.  I’ll spare you the details here so as not to ruin any of the fun for newbies, but if you appreciate fear, gore, and mayhem, then Zombie will tickle you pink, well, more of a rich crimson, actually.

So what gives?  It goes without saying that any horror fan worth his or her salt should enjoy a movie that pits a zombie against a shark, no matter how arbitrarily and no matter what else happens in the film.  Hence, there is a special place in my black, decrepit heart for Lucio Fulci’s Zombie, Zombi 2, Zombie Flesh Eaters, and so on and so forth.  But let’s look a little more closely….

When perceived in broad terms, Zombie works well cinematically.  Its prologue and epilogue are plot bookends that tie a neat bow around the movie proper and the story is structurally rock-solid. When analyzed more closely and in smaller pieces, it’s not difficult to spot the film’s many weaknesses, such as bad acting, bad dubbing, etc. But in retrospect those elements have become endearing as the tropes of a bygone era of horror and exploitation filmmaking.

Lucio Fulci spent a great deal of his career making films few horror fans would seek out.  However, by the late 1970’s Fulci’s career had waned and by taking advantage of the opportunity to direct Zombie, he reinvented himself as a horror director, eventually becoming an icon of Italian Splatter.  His long meandering path to the horror genre serves Fulci’s films well.  His experience is immediately apparent as his directorial thumbprint looms large within Zombie’s first few shots typified by his kinetic style wherein the camera is rarely still, nearly always moving in, out, over, under, left, right, up, and down.  The success of this movement is twofold: viscerally it bestows us with the illusion of movement which elicits an exhilarating sensorial response and as a narrative device the camera functions as our narrator, one that pulls us along deliberately, seemingly omnipotent.

Zombie’s cultural implications shouldn’t be understated.  It not only helped codified on film the still-materializing Romero-rules as a the worldwide zombie standard, it entrenched what we now conceive of as zombies, George A. Romero’s zombies, into the global pop cultural landscape while still recognizing the zombie’s voodoo roots.  And by blending Romero’s zombies with the original voodoo zombie concept, Fulci has reconciled two disparate and independent concepts known by the same name into one homogenous idea, seamlessly and without excess explication. To me this is Zombie’s biggest feat.

Fulci’s zombies run the gamut. There are fresh zombies, there are zombies who’ve been dead for a while and they’ve begun to rot, and there are the desiccated, worm-infested zombies who literally rise from the grave. This element of the film contributes a large and underrated part of modern zombie iconography and imagery.  At the time Zombie was released, Romero’s zombie’s had always been portrayed as “fresh” and weren’t represented otherwise until 1985’s Day of the Dead. However, Fulci’s “Wormface” zombie, adorning the poster for Zombie’s American release, is an indelible fixture representing the idea of ghouls climbing from the earth beneath their head stones and shambling forth, mummy-like and ravenously hungry. These images soon reared their ugly heads in the mainstream media by way of John Landis’s music video for Michael Jackson’s Thriller.

Perhaps the most fun element of Zombie is the flesh-ripping, blood-spraying, and, yes, eye-gouging practical FX by Giannetto De Rossi.  And while these gags have been tamed by the passage of time and the cinematic blood-letting we’ve all been subjected to since then, the close up of Paola’s eye getting impaled and subsequently plucked out by a gnarly wooden shard is an iconic and awesome bit of in-camera carnage and a symbol of a special era in the annals of horror cinema.

So, despite all the well-reasoned, positive attributes people use to describe Lucio Fulci’s Zombie, its appeal is really very simple.  It’s a gore-soaked thrill ride about the great zombie uprising.  Moreover, it starts in the Caribbean, the rightful birthplace of the zombie apocalypse and the only place where zombie’s can battle sharks while beautiful nude scuba divers watch excitedly, and we watch excitedly, too, while ghouls crawl up from the earth to devour the living.