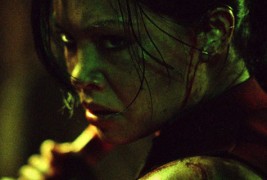 Over the last century-plus of cinema (the first known horror movie was shot in 1896 — Le Manoir Du Diable), the horror genre has evolved and revolved, broken down and built up, reused and recycled.  Ideas have been created and recreated, icons have been made and careers have been resuscitated.

Like all genres of film, horror has its archetypes and themes — building blocks of the very foundation of the universal haunted house.  Women in horror have been around more than just about any other omnipresent element the industry has had to offer.  Today, it is a glorious time within the horror community — the female presence is evolving.  It has never been stronger or more outspoken.  More and more women are staking their claims in the fertile soils of fright.

We are currently smack dab in the deep end of the third annual Women in Horror Month.  With blogs, sites like this one, events, artists and charitable gatherings celebrating the cause all over the world, it’s about time we start examining just how invaluable the X-chromosome is in our beloved field.

If you haven’t gathered just yet, my affinity for women in horror runs bone deep.

Clearly, I’m not the only one who loves a female-driven horror film.  No, I’m not talking about boobs, petty attempts at a flailing survival, or oppressed ladies standing behind their men.  I’m talking about some of the most memorable films that represent what Women in Horror Month is all about.

The following is a list of 13 films that I consider to be the cream of the crop when discussing the roles women have played in horror.  These are in no particular order, mind you.

1. Suspiria:  Dario Argento’s classic horror film has been described as his vision of Snow White.  Vividly disturbing and psychologically terrifying, this film also introduced us to one of the most memorable faces in horror — actress Jessica Harper.

2. High Tension:  An absolute mind-trip of a film.  We are taught, with great visual examples, that anything men can do, women can do better as serial killers.  Full of visceral brutality that a schizophrenic woman carries out with unflinching evil.

3. The Descent:  One of my all-time favorites.  This film takes the stereotypical “girls lost on a trip” cliché and turns it on its head.  We grow to love, hate, and root for these women.  Director Neil Marshall embarked on uncharted territory with this premise and the ladies of The Descent created a truly terrifying film.

4. Halloween:  Not only did the original launch Jamie Lee Curtis’ career, it also was a defining picture in Women in Horror History — the babysitter was no longer simply a gratuitous pair of breasts and legs.  She can be beautiful AND smart AND tough.

5. A Nightmare on Elm Street:  Heather Langenkamp carried this film on her shoulders. As the beloved Nancy Thompson, Langenkamp gave teenaged girls everywhere a horror icon to look up to.

6. Hellraiser:  We see a teenage girl outwit the missionaries from Hell, when everyone else has fallen by the wayside to hideous demises.  In this way, actress Ashley Laurence joins forces with Heather Langenkamp to prove you can never underestimate a gal, no matter her age.

7. Friday The 13th:  Jason gets all the credit and love, but let’s not forget — his mother is the original killer!

8. I Spit On Your Grave:  The character of Jennifer Hills goes through Hell and back, and lives to tell about it.  She maims and mutilates male genitalia along the way.  Ahead of its time by a long shot, this flick is the epitome of the revenge film.

9. The Exorcist:  Can you name a character more terrifying than the possessed Regan MacNeil?  ‘Nuff said.

10. Alien/Aliens:  Sigourney Weaver as Ripley will forever be amongst the top names on the list of bad ass characters in film history, regardless of gender.  Kudos to director Ridley Scott for breaking down barriers and creating arguably the first female action hero ever.

11. May:  A modern spin on the Frankenstein story, actress Angela Bettis brings director Lucky McKee’s May to life.  With such emotional force, you are left disgusted at the torment and pain society brings upon an outcast.

12. Bride of Frankenstein:  Elsa Lanchester shines as the title character.  An original woman in horror, the Bride steals the show from her famous husband.

13. Night of The Living Dead (1990):  Barbara gets a makeover, from Bambi to bad ass. Director Tom Savini’s take on the Romero classic molds the leading lady in a whole new way, complete with artillery and a mean streak.  This performance is aced by Patricia Tallman.