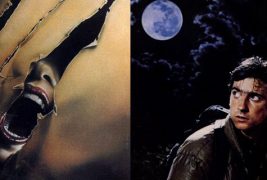 1981 was an amazing year. The word internet was first mentioned. Lady Diana married Charles, the Prince of Wales. The first flight of the US space shuttle Columbia took place. Muhammad Ali retired with a record of 55-5. Researchers found the Titanic wreck at the bottom of the Atlantic. Peter Sutcliffe, also known as the Yorkshire Ripper, was caught and imprisoned for life.

Perhaps the most amazing event to occur in the year 1981 was the release of arguably the two greatest werewolf films of all time.

Separated by a mere four months, The Howling (April 10) and An American Werewolf in London (August 21) roared onto the scene, taking what had been a very family-friendly monster idea of a man who turns into a wolf at night and turning them into the bloodthirsty lycanthropes they deserve to be recognized as.

Directed by Joe Dante, The Howling starred Dee Wallace, everyone’s favorite horror film mom, as well as Patrick MacNee and Robert Picardo. Effects magician Rob Bottin handled the special effects. The film followed L.A. news anchor Karen White (Wallace) as she is being stalked by notorious serial killer Eddie Quist (Picardo). Following a traumatizing run-in with the mad man, Karen is accompanied by her husband to The Colony, a rehabilitation retreat where Karen hopes to recover from the horrifying events. But, of course, things aren’t as they appear and soon we learn that everyone at The Colony is a werewolf! The film’s shocking finale features Karen transforming into a werewolf on live television during the evening news. Wallace actually wasn’t the one to undergo the transformation, however, as she had other commitments that prevented her from returning to set to film the added scene. Bottin and his team of monster loving effects artists created an animatronic model to stand in for Wallace during this scene.

The film is most definitely a horror film, complete with two awesome werewolf transformations, tons of violence and sex to boot. It is also infused with Dante’s signature dark comedy and there are horror easter-eggs abound, including a cameo by famed monster lover Forrest J. Ackerman, who plays a customer in an occult bookstore, holding a copy of his beloved Famous Monsters of Filmland magazine.

Bottin blew the world away with his work in the effects department. The man who did The Thing a year later took over the film from special effects maestro Rick Baker when Baker left to go work for another werewolf film that was coming out around the same time…we’ll get to that shortly. But Bottin’s transformation of a resurrected Eddie Quist as he turns into a werewolf, complete with snapping bones and bubbling muscles, is absolutely awesome and still withstands the tests of time. 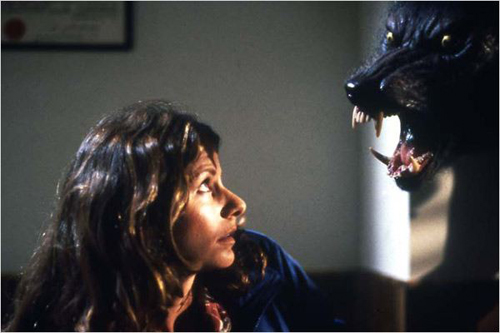 The film raked in nearly $18 million at the box office and the success allowed Dante and producer Michael Finnell the chance to do 1984’s Gremlins, another beloved horror film that doesn’t take itself too seriously. 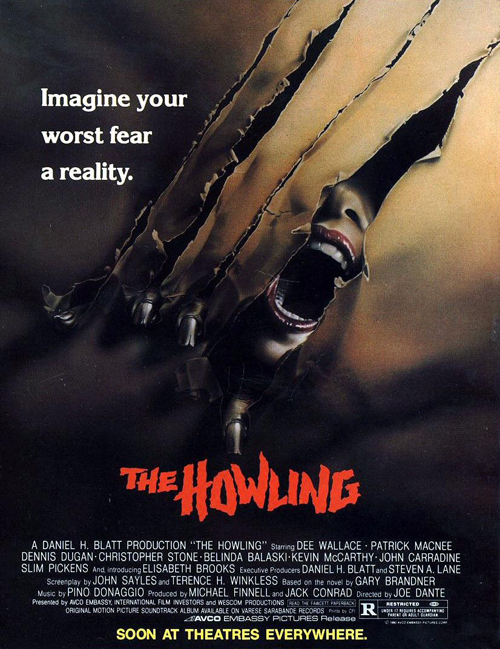 That “other” werewolf film that Rick Baker left The Howling for? That would be An American Werewolf in London, widely considered the best werewolf movie of all time, and for great reason. Director John Landis incorporates some black-as-ink comedy into his film as well, but the horror is ratcheted up several notches in this werewolf tale. The death of Jack Goodman is especially disturbing.

This film tells what happens to friends David Kessler (David Naughton) and Jack Goodman (Griffin Dunne) when they are attacked by a werewolf in the middle of the night out in the moors of England. Jack meets a grisly, vicious death while David survives with little more than a nasty scratch – of course, that leads good ol’ David into the tormented world of lycans.

David recovers from his wound at the local hospital and falls for Nurse Alex (Jenny Agutter). While the scratch heals, David’s nightmarish hallucinations of buddy Jack roaming his hospital room ramp up throughout the film. When we first see Jack, he is freshly torn open. By the time we see him towards the end of the film, he resembles little more than week old road kill left out in the Texas sun in July. David realizes that the only way out of this personal hell is death and, like the classic wolf man tale before it, the only way to truly be rid of the curse of the wolf is if your one true love kills you with a bullet. 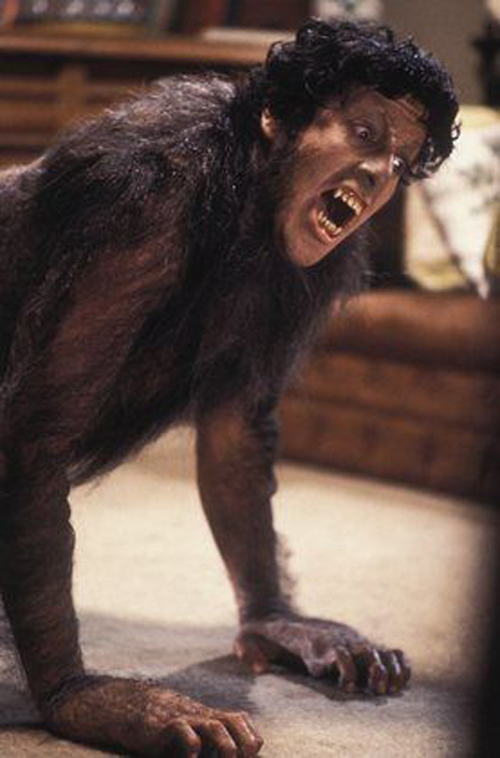 Baker is acknowledged as the modern-day master of practical effects for a damn good reason. He pulls out all the stops during the amazing and cinema-shaking werewolf transformation we see David go through. It’s a painful view as we watch limbs grow and hear tendons pop. And that nightmare scene involving the Nazi monsters? Holy shit, if that didn’t ruin thousands of folks’ sleep the night they first saw it.

The film took in $30 million at the box office and was a great stand-alone movie (please completely disregard the horrendous 1997 “follow-up,” An American Werewolf in Paris).

What makes both of these films so awesome and so unique is just how similar they are in the grand scheme of things. We get a quick lesson on the Way of the Wolf in each film and we get to see the two greatest transformations in cinema history. Both feature a lead that we can easily sympathize with, thrust into this terrifying world against their will and forced to live with the consequences. The acting is stellar in both and a true passion for the genre and the tales being told ooze through every frame of each film. 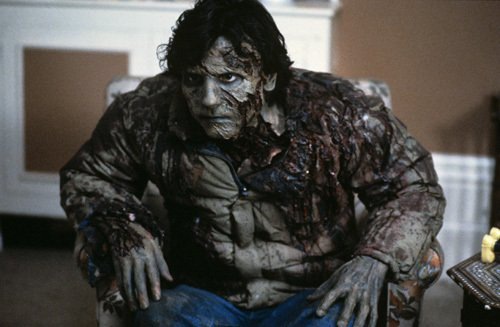 The shock factor of An American Werewolf in London trumps The Howling in a landslide, but the latter film knocks it out of the park with its urban setting in the seedy alleys of Los Angeles. The legend of the werewolf is a predominant part of AAWiL’s backstory and there may not be a better scene that sets up the lore of a lurking monster than the one that occurs in The Slaughtered Lamb on the outskirts of the moors. Dee Wallace’s performance of Karen White reigns supreme over all other performances in both films. Pitting both films toe-to-toe probably wouldn’t find you a definitive champion but it sure does make for a hell of a mini-movie marathon. Highly recommending both still doesn’t do either movie justice.

In a day and age when the idea of two amazing horror films coming out so close to one another and featuring practical effects is as foreign as the moors were to David and Jack, both of these films stand up as classics of the genre. Make no mistake – you’d be wise to keep off the moors and stick to the roads because you can’t tame what’s meant to be wild. It just ain’t natural. 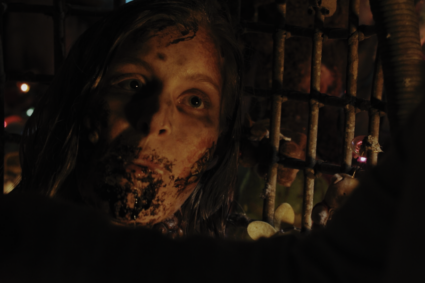 4 thoughts on “Throw 1981 to the Wolves: THE HOWLING and AN AMERICAN WEREWOLF IN LONDON Retrospectives”