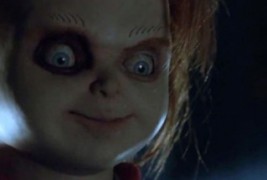 The 1980s was a decade that gave us horror fans plenty of memorable slasher movies. Slashers that were meant to scare, shock, and gross out the audience. At the end of the 1980s the horror genre was slowly degenerating into the horror-comedy realm when every horror movie relied on some form of humor. But one slasher film released near the end of that decade dared to remind us that not all slasher films can be rib-chuckling funny, even if its killer is a pint-sized doll. That film is Child’s Play.

Child’s Play is often considered the last great seriously creepy slasher film to be released in the 1980s for many reasons. Twenty-five years later this film still terrifies audiences with thrills and some of the most frightening imagery ever captured on film. With five sequels, including one that’s brand new—Curse of Chucky, it’s time fans were reminded of the origins of the famous killer known as Charles Lee Ray, or Chucky as well as the first film’s mainstream success, the many cast and crew members who went on to make names for themselves, the slight controversy the film had upon its release, and the legacy it leaves behind.

Child’s Play is about a six-year old boy named Andy Barclay who is given a Good Guys doll for a birthday present. Named Chucky, Andy thinks it’s the greatest thing in the world but Chucky holds a dark secret: it holds the soul of serial killer Charles Lee Ray, who transferred it to the doll via voodoo incantation with his dying breath.

When Andy learns the truth, his mother refuses to believe him at first and neither does Detective Norris (the man who brought down Ray himself), until after a couple of murders and then subsequently getting attacked by Chucky. This causes problems initially for Andy, as all the evidence points to him as the murderer. Chucky eventually learns that in order to leave the doll’s body, he must transfer his soul to the first person he told about his true identity, which is Andy of course. Now Andy’s life hangs in the balance as his mom and the detective race to take down Chucky before Andy’s soul is taken forever.

Child’s Play was released theatrically in November of 1988 by United Artists and was a financial success, grossing around $33 million with a $9 million budget. The movie also received mostly positive reviews from critics. It also received praise from notable film critics Leonard Maltin and Roger Ebert. 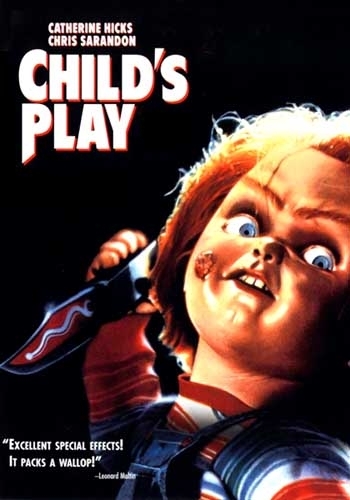 The film also received some controversy upon its release.  Some detractors felt that the film was a way to incite violence in viewers, especially young children. This was due to the fact that the killer in the film is a doll and uses weapons that are considered children’s toys. A possible contributing factor may be that the Good Guy dolls and Chucky were modeled after the popular Cabbage Patch dolls.

Due to the success of Child’s Play, the filmmakers intended to make a sequel, but United Artists didn’t want to have anything to do with any follow-ups due to the film‘s subject matter. The filmmakers ultimately went to Universal and they carried on the series from that point, ultimately releasing Child’s Play 2 in 1990 and Child’s Play 3 in 1991. The sequel was also a success but the third entry underwhelmed, putting the series in hiatus for a while.

When Scream was released in 1996 the creators of Child’s Play, Don Mancini and David Kirshner, decided on doing a fourth entry, named Bride of Chucky in 1998. Bride of Chucky was an amazing comeback for the series, and to this date it’s the most successful film in the Child‘s Play series. Bride of Chucky was directed by Ronny Yu, who went on to direct the very anticipated Freddy Vs. Jason in 2003.

In 2004 a fifth entry was made, Seed of Chucky, which also marked the directing debut of Child‘s Play‘s creator Don Mancini. This one was another clunker, due to the fact that the series was pushing toward the horror-comedy realm, far away from the tone of the first movie. A sixth entry, Curse of Chucky, has just been released and it has Don Mancini returning as director. Plans for a remake came and went when the filmmakers decided to do Curse of Chucky instead. Personally, I’m glad they settled for another sequel instead of a remake because this is one of many horror movies where a remake really isn’t necessary. 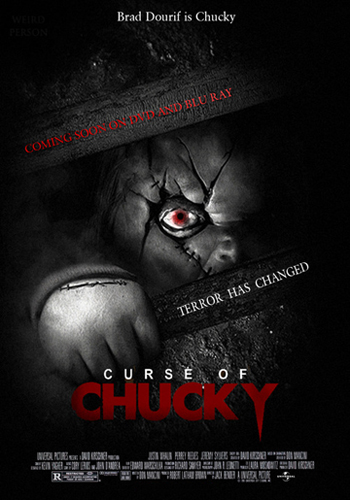 The film’s cast and crew have made themselves names in multiple film projects. Director Tom Holland started his career with Fright Night in 1985 and went on to make two Stephen King film adaptations: The Langoliers in 1995 and Thinner in 1996. Actor Chris Sarandon previously worked with Tom Holland on Fright Night and also appeared on one of the Tales from the Crypt feature films, Bordello of Blood. He even made a tiny cameo in the Fright Night remake in 2011. Kevin Yagher, who helped engineer the Chucky doll and did many of the makeup and special effects, worked on many films. His work includes several of the A Nightmare on Elm Street movies as well as creating the Crypt Keeper for Tales from the Crypt. During the filming of Child’s Play, Kevin Yagher met his future wife on set. She was none other than actress Catherine Hicks, who plays Andy’s mom. And who can forget Brad Dourif, who not only played Charles Lee Ray onscreen but also the demonic and still impressive voice of Chucky. His film career is expansive and legendary, ranging from snagging a Best Supporting Actor Oscar nomination in 1976 for his role in One Flew Over the Cuckoo’s Nest to working with director Peter Jackson on The Lord of the Rings. Dourif has appeared in numerous films, but his most famous role is gonna be that of Chucky, no doubt about it (of course he voices Chucky in Curse of Chucky, as no one else can voice the killer doll as well as he can). Not much can be said about Alex Vincent, who played Andy. The only other major film credit he has was returning as Andy in Child’s Play 2. He has gone on to become a sound engineer and has made a couple of film appearances outside of Child’s Play, but none as successful as the Child’s Play movies.

Well, there you all have it. Even after 25 years, Child’s Play still stands the test of time as one of the best serious slasher films ever made. Even with some slight controversy against it, the film became a huge hit and was appreciated by critics. It spawned off an impressive series with a new entry out now. Be glad that Child’s Play has not fallen into the tragic curse of the remake zeitgeist (even though there are a few remakes that actually are pretty good). So find yourselves a copy of this classic piece of horror and enjoy it for what it is. Who knows? It might even be your “best friend to the end. Heidy-ho. HAHAHA!”