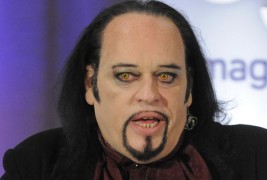 Vampires exist in real life. As far as we know vampires aren’t super powered or immortal, but there are people who live in the world on our plane of reality who are so enamored with the romance and lore of vampires that they DRINK HUMAN BLOOD (Sources are unconfirmed on the blood drinkers). I have a strong inclination and an even stronger paranoia fueled by an irrational dread that the blood drinkers are sadistic millionaires having soirees within the comfort of their stately manors or a group of delusional True Blood fans getting way too into their role-plays in the cramped, dank basements of their parents’ homes. The point is that the blood drinkers are out there in the world, and as you’re reading this, they’re drinking human blood at this very minute to wash down their caviar or their Wendy’s triple stack combos.

Cleve Hall from the SyFy reality series “Monster Man” may fall under the latter. Not that I’m saying that he’s portly for a vampire-lover or knocking his gothic attire, but I got to meet Cleve Hall at the Chicago Wizard World Convention, and when you’re doing the con thing I just assume that you only have time to grab convention food or fast food and just stress eat. I know I did while I was there, and perhaps after my fifth corndog I started to hallucinate from the spike in my blood sugar, but Cleve, dressed as a vampire, seemed to appear less human and more vampiric and I felt I had to write about my experience.

I don’t know. Maybe I shouldn’t write after corndoggin’ so hard or maybe it was the way the light was hitting Cleve’s clammy, white skin or how his demonic red contacts seemed to bulge out from his pupils as if he were trying to conceal some great internal pain–pain that could have been caused by the burning of his sizzling skin under the daylight while attempting to focus on signing as many twenty dollar 8X10’s as possible before erupting into flames, or (going back to my theory of convention guests having to eat on the fly) maybe he was suffering from some serious indigestion while struggling to put up with a migraine that was constantly being aggravated by a fanboy blogger’s annoying interview questions. Either way, I couldn’t attest to why Cleve Hall seemed to be mocking human behavior or what was causing his odd smell. It was mysterious, pungent and simply intoxicating (seriously, he had on a fantastic cologne. It wasn’t too strong, but it was seductive. Do I want to fuck Cleve Hall? Well, not really, but his cologne made me question my sexuality).

Other than that, he seemed to be a regular guy with a unique position in life having built a solid career as a SFX monster makeup artist who’s looking to take advantage of his niche within the world of reality TV to help gain some new followers (or simply get some new gigs). Not only do I respect it, but I admire Cleve’s tactics as well as his artistic skill as monster maker.

I got a chance to ask Cleve a few questions while he was haunting an autograph table at Chicago Wizard World. Now, the Wizard World Comic Convention isn’t really a hotbed of horror, (I mean, I saw Cleve and then ran into Ken Foree from Dawn of the Dead in a gift shop where he was in the middle of a life or death battle against the forces of evil who had caused his cheap belt buckle to break apart) 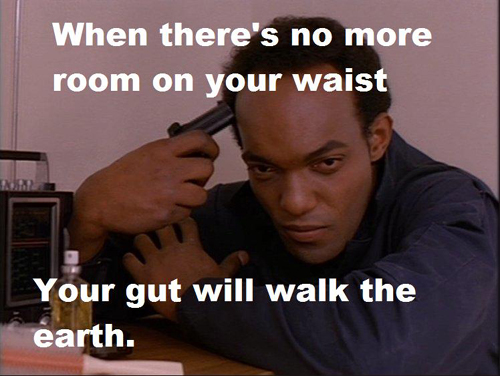 In fact, the only thing that’s truly horrifying is how Chicago Wizard World organizes their events.

After Cleve Hall helped me embarrass one of my shy friends by coming up and talking to her about overcoming her bashfulness (he really was quite gentlemanly), he squeezed in some time to answer a few quick questions for me before getting back to the other people in line at his table.

Me: Alright, first question, you’ve done make-up for Ghoulies, Troll, you were even in Pee-Wee’s Big Adventure, and now you have a reality show on SyFy, so I’m curious. What was it like breaking into the special effects make-up business?

Cleve: I was still a junior in high school and had entered a costume contest  in Houston, TX at the time, and someone from Six Flags [in] Texas saw me in my Godzilla costume, and I’ve been making monsters ever since. Thirty-five years of it actually, and I don’t know how to do anything else.

Me: We’ll there’s worse skills to have, but speaking of monsters what’s your fav—

Random Fan: How much are photos?

[A photo was purchased, signed by Cleve and exchanged for 20 American Dollars to a portly, but surprisingly merry and energetic young man with a beard as thick as Alan Moore’s and a Walmart bag full of comics and ignorant bliss]

Me: So, Cleve…is it pronounced Clee-eve like short for Meat Cleaver like, ‘Somebody hand-me my meat cleave, so I can chop this cow’s utters off!’ or Clev like short for Clever like someone who doesn’t know how to abbreviate like ‘Those Jigsaw traps are pretty clev…I couldn’t make them. He must be a pretty clev guy?”

Me: Fair enough, so Clurve, when you’re not making monsters what do you do in your spare time?

Cleve: Spare time? What’s that? If I ever do get out, it’s going to a goth club, goth or industrial club stuff, and I like going out to the goth scene–a lot of creative energy out there. Other than that I’m usually under my hearse trying to get it to run.

Me: Any advice for inspiring makeup artists out there?

Cleve: Yeah, get a backup plan.

Me: Cleve, you’re a smart man.

Alan Moore’s younger, fatter doppelganger returned with more comics in his Walmart bag and a few other friends that looked like human sized albino shrimp. I left and tried not to cry while looking in the mirror of the bathroom while my fingers clenched at the outline of the knife in my right pocket. “Cleve’s right…” I thought as I took the knife out and put it to my wrist, and then I looked up in the mirror “you got to have a back-up plan.”

One quick slice up the center of the veins sent blood spattering against the mirror as my fat ass hit the floor and my knife flew out of my fingers. I fumbled in the red mess pooling around me for my blade so I could finish the job, “You got to have a back-up plan,” I groaned wearily in a demented sob as my strength began to leave me and my hands pattered in the red slime pouring from my wrist as if I was trying to type out my despair in an invisible blog on an invisible keyboard. The nerds entering the bathroom artfully dodged my body and blood with great cavalier, careful not to get any red speckles on their shoes or signed James Hong posters before they made their ways to the urinals to clear out the Mountain Dew from their bladders.

I attempted to reach a blood soaked hand out to one of them as he moved to the sink to wash his hands while I muttered, “Help me…help me find my knife,” but he was ignorant to my plea only half noticing me when he was shaking the water from his hands that the automatic dryer failed to evaporate.  As I watched him exit I found a dark silhouette move out from the center of the door frame and fly into one of the stalls like the shadow of a phantasm caught on a gale of wind. I heard groans of agony echo out as my vision was blurring. I blacked out only for a moment and when I came to, my eyes met the red demonic contacts bulging out of Cleve Hall’s pupils, seething with ravenous hunger as he loomed over me. “There weren’t any more corndogs left at the concession stand,” Cleve said through gritted teeth revealing his fangs. “I suppose you will have to do.”

And Cleve Hall turned me into a fucking vampire, and by vampire I mean that I now like to drink human blood in my mom’s basement while watching True Blood. The End.

The moral of the story: Don’t go to Chicago Wizard World.