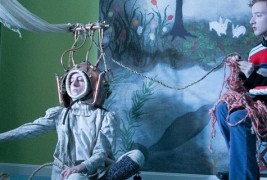 Do you like it weird, spontaneous, fun, and full of strange sights and sounds? If that’s how you like your movie experience, director Hooroo Jackson’s Aimy in a Cage is certainly the movie for you. While not a psychedelic cinematic masterpiece on par with the work of Terry Gilliam, this movie is a delightful 79 minutes of colors and disjointed narrative that you will either love or hate.

Former Disney actress Allisyn Ashley Arm stars as Aimy Micry, the eponymous protagonist of the film. Aimy is a wild child, full of whimsy, wacky outfits, and screeching outbursts. She lives in some sort of large labyrinthine apartment with a diverse cast of strange characters, including her very unsupportive boyfriend, various uncles and aunts, and the film’s ersatz villain: Aimy’s strict grandmother. Infamous lunatic/actor Crispin Glover appears randomly as a character with a nefarious agenda, but who really seems to bear no real connection to the whole of the narrative.

A worldwide pandemic caused by the Apollo Virus decimates the planet, leading to quarantines and rationing of food. The excruciating panic becomes the backdrop against which most of the characters unravel in the face of adversity.

When one of Aimy’s grandmother’s favorite dolls is damaged, swift action is taken to break the young woman’s spirit through a complex medical procedure intended to straighten out recalcitrant youths. Thus begins Aimy’s descent into a despairing madness from which she has no escape. From neurosurgical victim to quasi-hostage, Amy suffers at the hands of those who would portray themselves as arbiters of sanity, modicum, and good taste. 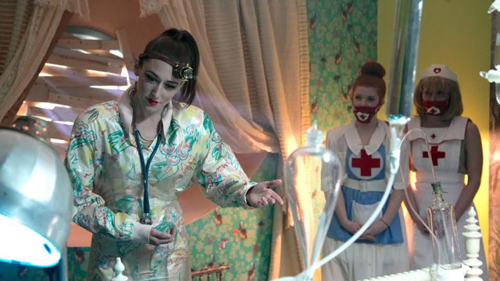 Aimy in a Cage is a film that’s based on the graphic novel of the same name, also by Hooroo Jackson. While suffering from a difficult-to-follow plot, this movie is more of a visual expression of the decay of civility and order than a straightforward tale. Aimy’s paintings are vivid creations that come to life on the screen in animated vignettes that help the film’s chapters transition from one to the next. The rooms in the Micry abode are lit in eerie colors that change from one scene to the next, dragging the viewer into the effluvium of mise en scene.

A large part of the fun of watching this movie is its sheer visual power, for, as previously stated, the direction of the story veers precipitously to and fro. Beautiful costumes adorn the large cast and almost grant them a distinctly cartoonish quality of individuality. Aimy in a Cage displays a clear Wes Anderson influence in terms of demonstrating character development through sartorial and accessorial changes.

While the acting ranges between great and mediocre, Allisyn Ashley Arm stands out for her manic performance as Aimy. Through the character’s progression from fey teen to tortured victim, Arm imbues the character with personality. She does not hold back at all, especially when the character goes through the horrifying medical procedure as well as during her drawn out detention.

In summary, this film is not going to be enjoyed by all. For some, it will be too crazy, too much to handle for too long. Nevertheless, the film is a charm of ineffable value to those who are able to just go into it and enjoy the ride. Watch it and find out where you stand on Aimy in a Cage. 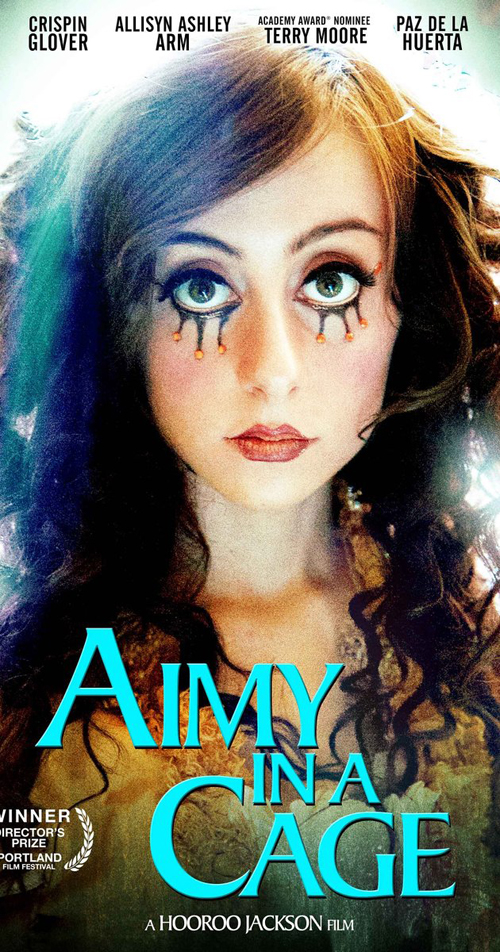 One thought on “Aimy in a Cage Movie Review”