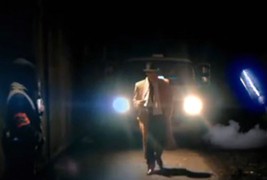 I have a soft spot for the weird, the gonzo, the high-concept, and Christian Grillo’s Apocalypse Kiss is unashamedly all three. Set in a dystopian year 2050 in which mega-corporation Horn Industries has merged with the United States government, dividing the country into an affluent Western Sector and a poverty-stricken, crime-ridden Eastern Sector, Kiss tells the story of serial killer Adrian Fischer (D.C. Douglas), who is at once pursued by Detective Jerry Hipple (Tom Detrik) and pursuing lesbian partners-in-crime Katia (Carmela Hayslett) and Gladys (Tammy Jean), who, to Adrian’s fury, are being given credit for his carefully-planned murders. Meanwhile, the sun has become a red dwarf, and a techno-oracle (Brian Anthony Wilson) predicts that the end is nigh.

Grillo (whose previous credits include the shorts Deer Crossing and Eliza’s Diary) makes no attempt to hide his influences in Apocalypse Kiss. The menacing sexuality of A Clockwork Orange swirls with the cyber-noir of Bladerunner around a serial killer who wouldn’t be out of place in American Psycho. It’s a bit of a casserole, but the ingredients are high-quality: a sleazy mix of massive screens blaring advertisements over decaying cityscapes filled with rampant drug-use, and casual violence. There are some very effective set-pieces (Wilson as the mind-reading “Wizard,” surrounded by four screens of shrill-voiced girl familiars who parrot back bits of the conversation makes for an arresting sequence) and some wonderful scenes, but Kiss never quite knits itself together, feeling like a bit of a jumble even at its best.

Grillo is most successful when he allows his actors to simply follow their characters. D.C. Douglas as Adrian is particularly fun to watch as he slithers from conversation to conversation, totally convincing as a smug psychopath, and Hayslett shows her range as the unhinged murderer Katia, who switches from mute to Russian to American over the course of the film. Tom Detrick, saddled with some cliché crime-scene exchanges and an often corny noir voiceover, is a bit less effective as Detective Hipple, and poor Tammy Jean’s Gladys seems to get all the script’s least wieldy lines.

Similarly, plot and character elements surface seemingly at random. We learn that Adrian is obsessive-compulsive, but there doesn’t seem to be much reason for him to be. Did Grillo intend Adrian’s OCD to be symbolic of something? Are we supposed to get something out of the juxtaposition of Adrian’s “clean” murders with the “savagery” of Katia and Gladys? And what about the ending, in which all previous plots are abandoned? Apocalypse Kiss often struck me as a movie desperately looking for a subtext—some higher idea on which to hang all its tropes. As a result, the story never quite coalesces, and we’re left with a mess of fascinating but unrealized fragments.

It’s clear to me that Grillo’s directorial heart is in the right place. Apocalypse Kiss’s disunity isn’t the result of a hipsterish desire to be cool for coolness’s sake. Rather, it’s a danger inherent in trying to realize as high-concept an idea as Grillo has attempted here. I won’t call Apocalypse Kiss a failure—even a noble one—because there’s too much that’s good here for me to dismiss it so easily. A bit more restraint, a bit more attention to conceptual nuts and bolts, and I think he’ll give us a film that lives up to his—and its—potential. 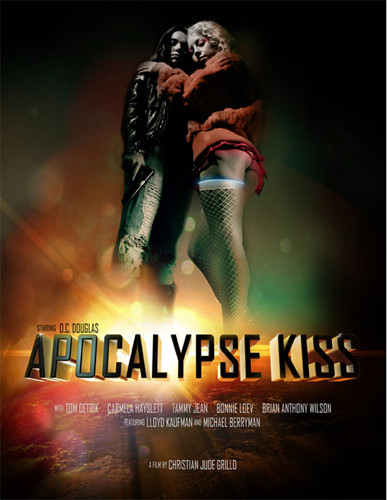 Apocalypse Kiss is now available to buy, rent, or stream.