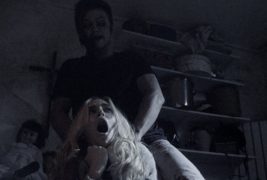 Stop me if you’ve heard this one before. What do you get when you put a gang of friends, an empty cabin in a remote part of town and a bunch of demons together? Why, you get Bornless Ones, of course! Oh yeah, you were probably thinking of that other movie, or maybe even that other-other one. Alexander Babaev’s feature from Uncork’d Entertainment tries to give us a new twist on the old demonic possession game. It’s set for both limited theatrical and VOD release on February 10th.  Is it worth a purchase? Read on.

Bornless Ones is very heavily influenced by Sam Raimi’s horror classic, The Evil Dead. This is not necessarily a bad thing, but it’s an overdone idea. I mean, how many more movies do we really need that are set in spooky, deserted cabins in the woods? We know these things never end well. Plus, how can the idea of demonic possession be made fresh? Alexander Babaev has made an attempt to do just that, but does it work well?  Let’s see.

The film opens with a scene that we’ve seen time and time again. We see a terrified, bloodied woman sitting in the candlelight while hurriedly scribbling on something that looks like pages from a spell book…uh oh. She scoots along the floor of the cabin while loading a shotgun, ready to battle someone or something. The being appears in front of the woman and a confrontation is had. Seconds later, we’re outside of the cabin and hear two gunshots ring out. Roll the opening credits!

Once the title screen flashes, we’re introduced our main characters as they drive through the countryside to their cabin destination. We have Emily (Margaret Judson) and her fiancé, Jesse (Devin Goodsell), along with her wheelchair-bound brother, Zach (Michael Johnston). We also have another couple of friends along for the ride, Woodrow (Mark Furze) and Michelle (Bobby T.).

Pretty early on, we learn that the whole reason for the road trip is that Emily plans on sending Zach, who has cerebral palsy, to an institution for his long-term medical care, and that they’ve purchased the cabin because it’s conveniently located near the facility. Doesn’t this all just scream of a good time?!

Naturally, there’s a pit stop at a remote gas station and it’s here that we get a slight Crazy-Ralph vibe from a drunken fella who gives the gang a note of concern when he learns of their destination, but nothing that’s really paid attention to. As a by-the-way, he also makes it known that he’s the resident home-brewer/ beer delivery guy in the area. Of course, this is what’s paid attention to, and who could  blame them?  I wish I had beer delivery at my place! 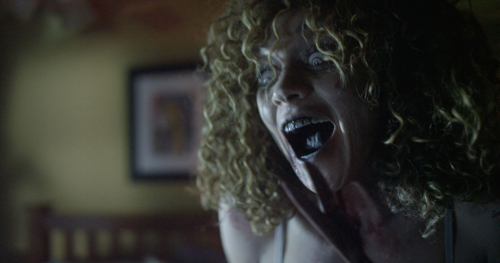 Moving on, upon arriving at the cabin, we meet a rather odd and giddy realtor who can’t hand over the key to the cabin and get the paperwork signed fast enough. He hurriedly explains that the previous owner left rather quickly for “personal” reasons, and due to not having the budget for a cleaning company, the house was left in an as-is state. He also mentions that maybe they can find some really nice, valuable stuff inside.  As the realtor rushes off, and Emily and Jesse think that everything is going to be great and the moving-in process begins. Boards are yanked off windows and a creepy dressmaker’s dummy wrapped in bubble wrap and stuck with needles is moved to the basement.

Soon after, rooms are picked and sexy times are had. For those of you who enjoy a little gratuitous nudity, around the 15-minute mark is your time. Enjoy. We not only get to see Woodrow and Michelle do what they do, we’re also let in on the fact that Michelle is preggers. Yay? We get a fast scene switch from softcore porn to Jesse lifting Zach from his wheelchair and getting him situated into the bed in his room, which happens to be a creepy kid’s room of the cabin.  Coincidence?  After yet another quick transition from the creepy room to a party in the front room. A roaring fire gets lit, and so do the residents of the cabin. Drinking, dancing and some light debauchery takes place amongst friends. What could possibly go wrong?!

If you guessed that a couple of strange religious symbols would be uncovered, give yourself a high-five! Conversation over what the symbols are and what they could possibly mean takes over the festivities. Thanks to Wikipedia, their answers are found quickly. We’re told of two demons whose names are found on the symbols, with one being referred to as the “Great President of Hell’ who has the ability to heal all infirmities. A list of 72 other demons is also found to go along with them. The more the merrier, right?

Meanwhile, over in Zach’s room there’s a different kind of party going on. We see him in the throes of a seizure, foaming at the mouth, while a demonic voice tells him there’s “no need to resist.”  Now, seeing as Zach is both non-verbal and unable to move, resistance is futile. We assume that the demon speaking to Zach is the ‘great healer,’ since Zach is held prisoner in his broken body. In fact, once Emily thinks to finally go check on her brother, she sees that he’s sitting upright by himself, and comes to the realization that he’s able to suddenly walk.

A doctor from the institution is called and shows up at the cabin to take a look at Zach. The doctor conducts a brief examination by listening to his heart and hears something unusual. Zach reacts to the doctor by grabbing a pen and marking the side of his neck with an ‘X,’ which gains the doctor’s curiosity, so he then requests permission to take Zach to the institution early to run some tests. Apparently, the doctor thinks Zach is essentially a miracle and is excited to get him back to the institution ASAP. He calls ahead to the facility to tell them that he’s got “someone who will change everything.”

Back in the cabin, yet another symbol is found and FINALLY…everyone starts freaking out. Around the dinner table, the thought that the previous owner of the cabin might have been obsessed with demonology is thrown out for discussion. Emily mentions that she found a spell book and wonders if it could have something to do with the other symbols. HUH, I wonder? Anyway, Emily calls the doctor to ask if he knows anything about the previous owner and to also check on her brother. Well, guess what? There’s no answer! Oh NO!! And, is that Zach walking away from the van he was riding in with the good doc? This can’t be good. Back at the cabin, Emily worries about her brother…who just suddenly happens to appear outside the cabin with a blood-covered shirt, and telling everyone that “they’re almost here.” Jesse also notices that there’s something wrong with his eyes, never mind the fact that he can also now move about and speak just fine.

Without giving much more away, Bornless One’s third act is pretty fun in the blood n’ guts department as the effects are pretty decent. Just a quick word of advice, if you happen to get impaled…stay impaled.

Wrapping this up, in the end, the ‘healing’ purpose of the demons is finally explained and a way to defeat the demons is eventually found. However, nothing can be that easy, right? There’s one final battle with personal demons to be fought before all is said and done.

My final thoughts? If you’re a fan of the Evil Dead films, including the remake, you’re likely to enjoy Bornless Ones.  All in all, it’s worth a watch. The acting isn’t atrocious, and the characters are likable and relatable enough. The story kept my attention, even though it takes itself a bit too seriously at times and lacks explanation in spots. Most importantly, the gore aspect is pretty damned enjoyable, and isn’t that what we really care about? 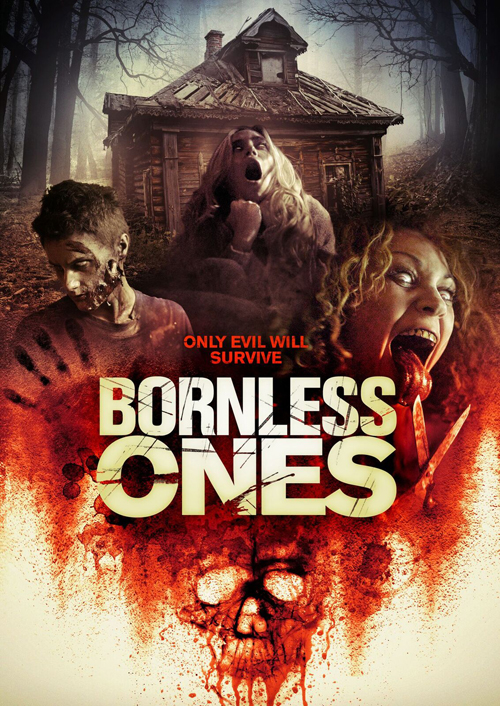