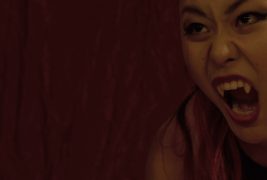 Written and directed by the spousal team of Sophia Cacciola and Michael J. Epstein, Blood of the Tribades is an ambitious throwback to the exploitive yet still artistic genre flicks of the 1970s.   Taking inspiration from directors such as Jean Rollin and Jess Franco, Cacciola and Epstein have created a world with a vivid and detailed mythology that spans 2000 years.

The vampirical cult of Bathor has broken apart upon gender lines, and when the men of Bathor become ill they believe it is only through eradication of the women that they will they be healed.

With a brisk runtime of 78 minutes, Blood of the Tribades is unfortunately not long enough to tell this story.  Watching the film reminded me of David Lynch’s Dune.  A noble effort, but a run time that does not allow enough development of both the narrative and the mood required for such a sprawling, time-defying epic.

Throughout the flick many characters are quickly introduced and given no time to make an impression on the audience before they are killed off, leaving their deaths without resonance beyond moving the plot along.  The films nudity works to create an immediate connection between character and audience, but these scenes fail to create the needed intimacy.  For example, during a bathing scene featuring writer/director Sophia Cacciola portraying a nameless character being killed, the audience knows the murder is coming, but the scene fails to elicit the type of reaction required for the death to have great weight.    Michael J. Epstein also has a role and while he is not bad in it, he is not good enough to make up for other elements handicapping this flick.

The highlight of the cast is Sindy Katrotic as Giltine.  She brings a raw presence to the proceedings with an unbridled charisma.  I was looking forward to the teased fight sequences she would be a part of, but the choreography and direction of these left me incredibly underwhelmed.

As a throwback film the digitally shot look felt out of place.  A filter could have added to the character and feel of the film as a whole.

Despite these shortcomings, Blood of the Tribades reminded me most of the movie Bad Taste by Peter Jackson.  Bad Taste is not a good movie, but it shows a capable filmmaker who, with more resources (ah-hem, cash) could prove themselves as an incredible talent.

Much of Blood of the Tribades was shot using close-ups for what I suspect were financial reasons.  And some of the shots were composed masterfully.  The locations are eye-catching and some revealing shots where the camera pulls back are beautifully composed.  Sophia Cacciola and Michael J. Epstein show they have real talent with Blood of the Tribades, despite the film’s shortcomings.  The script also shows a flair and willingness to explore taboo subjects such as sexuality and religion, despite being undone by the short runtime.

With a serious budget (rudimentary research showed a 20K budget for this movie) and a few actors or actresses with a better presence, Cacciola and Epstein could go on to surpass those that inspired them. 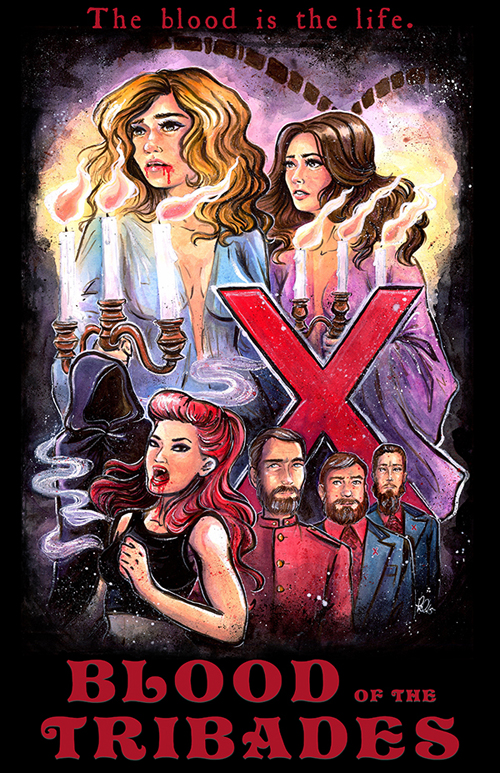