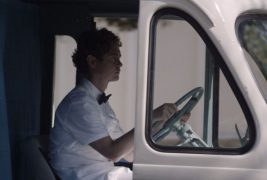 Filmmaker Megan Freels Johnston’s (Rebound) second feature The Ice Cream Truck is something of a red-hot commodity, in indie horror circles at least.  She’s already a known commodity on the production front, having produced Joseph Gordon-Levitt’s directorial debut.  The script for The Ice Cream Truck has already generated buzz as a semi-finalist in the Circus Road Screenplay Competition.  And more than a few insiders believe that the proverbial apple doesn’t fall too far from the tree with Freels Johnston whose grandfather is none other than crime fiction deity Elmore Leonard.

Uncork’d Entertainment will unleash The Ice Cream Truck on the world later this year, but in the meantime, read the full press release and watch the first clip below, Horror Fans….

Uncork’d President Keith Leopard made the deal with the filmmaker, who made her debut on 2014’s Rebound, ahead of the European Film Market in Berlin this week.

The provocative psychological thriller stars Deanna Russo (Being Human, Gossip Girl) as Mary, who moves back to her suburban hometown after her husband gets relocated for work.  As her family ties up loose ends back home, she moves into their new house alone. And although the move makes Mary nostalgic for her youth, there’s something very sinister about that Ice Cream Truck that patrols her suburb.  Killing.

“Megan Freels Johnston has made a very scary but also very smart film,” says Uncork’d President Keith Leopard. “The film also offers us a unique and refreshing take on a genre dominated largely by men.” Adds Leopard, “We’re excited to partner with Megan on what’s sure to be an early chapter in her long and illustrious career. I’m very excited about the release of The Ice Cream Truck.”

Says writer-director Megan Freels Johnston: “We are so excited to be working with Uncork’d Entertainment on this film whose niche is a mix of Art House and Horror Films, since The Ice Cream Truck strongly represents both of those genres.”

As a producer developing material for over a decade, Freels Johnston worked on adaptations of her grandfather’s work and produced Sparks, the directorial debut of Joseph Gordon-Levitt.  After completing a project for the USA Network, she decided to follow her passion and write and direct her own material. Her first film, 2014’s micro budget thriller Rebound, developed a cult following on VOD, and was called, “Almost David Lynchian in its strangeness” by Film Threat, and Rue Morgue said the film “[was] worth watching to the end for the unnervingly realistic twist ending.”