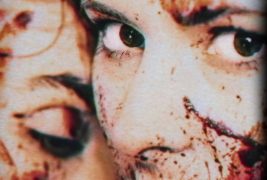 What do you think of when you see the words: found footage film? Shaky camera work? Flat storyline? Really bad overacting and effects? Yeah, me too. However, I’ve just watched a film that’s given me a slight change of heart. From the dark minds of Nick McAnulty (writer/producer/co-director), and Brian Allan Stewart (co-director), comes a darkly disturbing tale of madness. So, grab a snack and get comfy while I tell you about…Capture Kill Release.

The cast of characters is really short, since there are only about five of them in the entire film. For starters, we have our two leads, Jen (Jennifer Fraser) and Farhang (Farhang Gahjar). Simple enough, right?

These two come off as a seemingly happy, well-adjusted, and very likable couple. Jen is a bubbly, lovely young lady. Farhang is a handsome, easy-going fella. But, alas, all is not as perfect as it seems. One of the main reasons there’s a crack in their fairy tale is that Jen’s brought a friend into the relationship. A shiny, brand new, all-seeing, ever-present video camera. From her reaction to it, we see that she seems to be just as much in love with it as she is with Farhang, perhaps even more. At first, he’s just as excited to have a new plaything thrown into the mix, for obvious reasons. However, his love affair with the constant third eye isn’t as passionate as Jen’s.

The camera goes everywhere Jen goes. It’s a rule. It’s her rule. Everything is to be filmed, because the main reason the camera was purchased is that Jen wants to make a movie of sorts. She and Farhang are planning on filming the brutal murder of a random person. They have a blueprint and a seemingly solid plan for choosing a victim and carrying everything out perfectly.

We get to follow along as they get their tools for the job picked out, rules for picking a victim are made clear and we even see them go through kind of a dry run of the deed. They seem to have their homicidal shit together and are ready to rock n’ roll. However, one kind of important detail I noticed that’s overlooked is the how, when, and why these two want to kill someone in the first place. Did they meet at a serial killers social or what? I guess we’re not supposed to know.

Jen and Farhang pay a trip to Jen’s mother’s house. Mom sees Jen with the camera in hand and is informed that she’s making a documentary. Mom pipes about how Jen’s always liked to film things, and this leads to a weird conversation about Jen’s fascination with cats when she was younger, and whether or not they always land on their feet when dropped from differing heights. Jen informs those sitting near her that they don’t. At this point, Mom tells Jen that there’s a box of old tapes and an old video camera that’s hers for the taking. Now, this again is where there’s huge opportunity for backstory on Jen and her childhood serial-killer tendencies. I was expecting to see old videos depicting obvious serial-killer tendencies, or maybe a few more stories from Mom. Alas, the story just moves on. 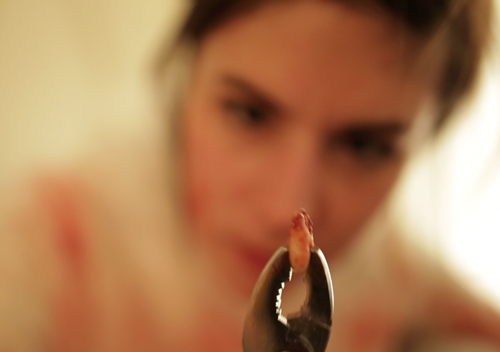 And it moves on with Jen taking a walk.  As she’s scoping the scene, looking for victims, she finds one. A nice enough homeless fella who’s just minding his own business while sitting on the sidewalk.  She approaches him, introduces herself and he tells her his name is Gary.  Jen asks him if she can film him for her movie. He agrees, and she tells him that he’s going to be her “star.” He gets a little excited at his potential newfound career.

After she’s finished interviewing Gary, she backs away while looking her camera, and accidentally bumps into a business man walking behind her. The guy winds up spilling his coffee on himself. She apologizes, but he’s not so nice of a guy, and starts calling her all kinds of names and just being a douchebag. Naturally, Jen doesn’t take too kindly to this. She reacts back just as verbally aggressive and tells him that he’ll get his. Uh-oh.

Being that she’s a bit unstable, Jen decides to take it a step further and follow Mr. Douchebag around to see where he goes on a typical day. While on the hunt, she discovers that he’s married and has a nice house and a pretty wife. She also finds out that he’s got a mistress in another neighborhood. This makes Jen even more fixated on getting even with the guy for calling her a “psychotic bitch.”

Okay, stop right here for a second. I need to drop a warning to the animal lovers at this point. Going back to Jen and her cat-dropping “experiments” for a moment, there’s a scene hereabouts where she captures a cat and does something horrible to it.  SO, consider yourselves warned. I wish I would have had a heads up upon watching this. It’s not terribly graphic, but it’s graphic enough.

This is also the point where we notice Farhang start to take notice of how psychotic his girl really is and begins to have second thoughts about carrying out their plan.

After the cat episode, Jen starts to get more eager to get things underway with a human, so she sets out to find Homeless Gary once again. She finds him in his sidewalk spot, and invites him over for dinner. Now, you’d think that Gary would know enough about stranger danger, but the promise of a hot shower and a hot meal is all it takes for him to get into her car. Jen asks him what he’d like to eat for his last meal. She also makes a funny by telling him to buckle up because she doesn’t want him to die before she gets him home. They get home and she goes into Martha Stewart mode in the kitchen. 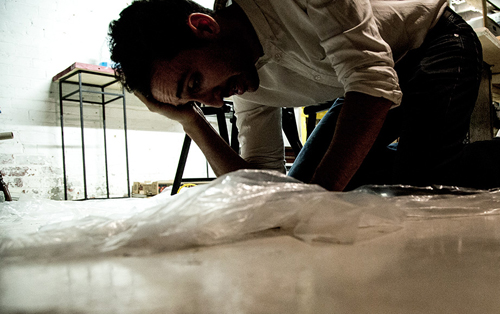 Once Farhang arrives home from work, he’s shocked to see the surprise that’s waiting for him at the dinner table. Gary introduces himself from the dining room, and Jen welcomes him home by popping a cork and pouring a glass of wine for everyone. Gary asks if he should make a ‘cheers’ as a thank you for the hospitality being shown, and Jen goes into the story of why people make cheers. Apparently, it was a sign of trust that poisoning hadn’t taken place. Upon hearing this, Farhang excuses himself and Jen to the kitchen so he can freak out on Jen for bringing a stranger into their home and ask her if she’s poisoned the wine. She tries to convince him that everything’s cool and that nothing’s going on, but upon returning to the table we see that’s not exactly true.

Essentially, things move pretty quickly once Gary is “knocked out” at the table.  Jen and Farhang put their master plan in motion. Jen is excited, almost giddy, while Farhang starts to lose his shit at how things have really come to this point.

Once all is said, done, and cleaned up, Farhang starts to resent the camera and tries to put his foot down with Jen, but she manipulates everything regarding the Gary situation. He tries to make her promise that the killing is over, and the filming of everything is over, but she knows she’s not done yet. Farhang and she get into a fight, and he grabs the camera and smashes it. But that’s not the end. That’d be too easy.

Remember the old camera at Jen’s mom’s house? Yep. Jen brings it, along with a new killer toy, and heads over to Mr. Douchebag’s mistress’ house after a follow to see that they’re both home. Jen knocks on the door, winds up making her way in, renders them both helpless and drags them out to her car by herself. In broad daylight. Without anyone seeing any of this. How does this happen?! Anyway, she’s like a kid in a candy store, bringing two more victims home and into the basement. Her fun begins.  Soon after, poor, unsuspecting Farhang comes home from work to find Jen in the basement with two more bodies. Without giving away any details, let’s just say that Jen’s movie finally gets its ending.

I really liked this movie. The cinematography is as solid as the acting. The gore is on point and it’s chilling. The plot is pretty easy to follow and the characters are likable and relatable, but a bit annoying when conflict occurs. As I said earlier, the story could have benefited from more explanation or backstory, especially regarding Jen and Farhang’s relationship and Jen’s childhood. Aside from that, this movie is worth a watch. 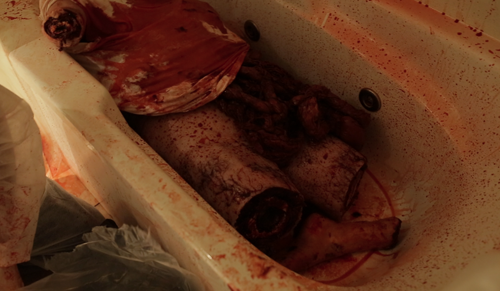 If you’re a fan of Dexter or American Psycho, you’ll enjoy Capture Kill Release very much.