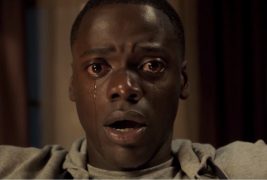 “Wouldn’t you feel uncomfortable, if it was you alone in a room full of black people?”

I had never really thought about it when my friend asked.  We were in Cable, Wisconsin for a boxing match, a relentlessly white ski resort town of 836, of whom half must have been packed in the showroom around the ring.  Sitting in the crowd, just another white guy in a turbid Caucasian sea, I didn’t know how to answer him.  The best I could come up with was a guilty “No,” because I was too chicken shit to say, “Depends on the situation.”

This question animates Jordan Peele’s Get Out, the deceptively simple story of Chris (Daniel Kaluuya), his white girlfriend Rose (Allison Williams), and a trip to meet her family in a remote suburb where the only black people have a Stepford-like love of their menial jobs as maids and gardeners.  Rose’s parents Dean and Missy (Bradley Whitford and Catherine Keener), a neurosurgeon and a psychiatrist respectively, welcome Chris, with Missy even volunteering to help him quit smoking through hypnosis—an offer that leads Chris to something much more threatening than just awkward conversation.

This is a stand-out film, by turns thoughtful, disturbing, funny, and human.  Peele, famous for his sketch-comedy work with Keegan-Michael Key on Key & Peele, pivots between his trademark satirical humor and horror so effortlessly that it’s hard to believe this is his first venture into the genre.  Performances are strong throughout: Kaluuya’s Chris is believable and relatable, and Williams undergoes a chilling mid-story transformation both unforeseen and completely believable. But LilRel Howery’s turn as Rod, Chris’s comic-relief best friend who begins to piece together what’s happening, is the best in the film.  Howery’s scenes function as mini-sketches, bringing Peele’s strong comedic talent to punctuate Chris’s growing isolation and paranoia.

Peele missteps slightly with pacing, and the punchline feels a bit rushed and underdeveloped, but not enough to derail the story.  Simply put, this is a powerful, funny, scary, nuanced film that you absolutely need to see.

That should be all I need to say, but of course it’s not and it can’t be—not in the era of #blacklivesmatter vs. #alllivesmatter, of Rachel Dolezal’s highbrow blackface, of Ben Carson’s bizarre recasting of African slaves in the fetid bellies of slave ships as hopeful immigrants and participants in the American dream.  To ignore the racial and historical subtext inherent in the film risks committing the same hypocrisy that Peele so subtly but forcefully condemns.

Get Out is at heart a retelling of the oldest black horror story in the Western Hemisphere: the zombie.  Not the shambling flesh eater we think of, the original zombie was an undead slave forced to labor for pitiless masters, his soul stolen by sorcery—a potent folk metaphor for the plight of Africans in the New World.  But Peele refuses the familiar tropes of racial horror.  Get Out has no Southern accents, no white hoods, no slave shackles, and no lynch mobs.  It’s blue-voting East Coast suburbia rather than small-town Alabama that the film so effectively invests with isolation and paranoia.

The racism on display in Get Out is a sin of omission rather than commission, a contradictory blend of willful colorblindness and inability to see a black man in terms of anything but his blackness.  A talented photographer, Chris fields endless questions from Rose’s upper-crust intellectual family and friends about his taste in sports.  Her father assures him he voted for Obama (and would have done it a third time), but it’s mostly an awkward gesture to show that he’s not one of those white people.  When Chris demands of the main villain, “Why black people?” the response is, “Oh, I don’t care about your skin color—I just want your eyes.”

But those white people can be hard to define.  In an early scene in the film, a police officer asks to see Chris’s license after they hit a deer on the drive up.  Chris reaches for his wallet, but Rose tells him to put it away, and demands to know why the officer needs to see it.  Is this honest-to-God racism, and Chris has learned the hard way that refusal carries consequences?  Or is Rose just playing social justice warrior?  It’s a scene rich in ambiguity in a film that asks a lot of questions but avoids easy answers. 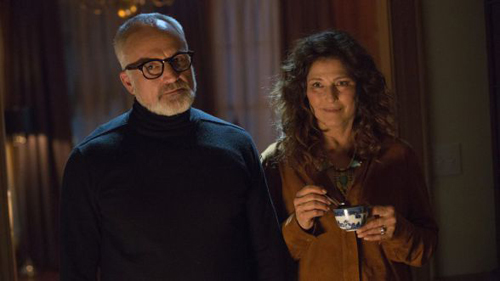 Peele’s tactic is a brilliant one, because it forces us, the viewers, to confront where we stand in America’s troubled relationship with race.  It’s all very good to eschew the n-word and use your white sheets only for bedding, but if police–or worse, neighborhood watch lawman wannabes—can kill young black men with impunity for being “threatening,” how far have we come from the era of the lynch mob?  When blacks are incarcerated at 5.1 times the rate of whites due to the confluence of a lopsided and idiotic War on Drugs and a prison-industrial complex that reaps revenues in the billions from jailing young black men early and often, have we really buried the chain gang, lineal descendent of slavery, safely in the past?

Get Out can be an uncomfortable film, and it certainly took courage to direct and produce it.  But while there’s a powerful message to Get Out, and it will doubtless draw both witless dipshits decrying its putative anti-whiteness and the same complacent liberals the film so cleverly skewers, it’s not just a message-film.  Peele’s instinct for horror is as solid as his instinct for comedy.  I don’t know whether Get Out will be a one-off or whether Peele will return to horror, but I hope it’s the latter.  Simply put, this is a powerful, funny, scary, nuanced, uneasy, atmospheric, brilliant film that you absolutely need to see.

And horror needs more of that.