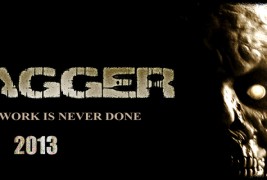 Texas filmmaker Casey Crow’s latest project is KLAGGER, a 12-minute short film that recalls the best of cinematic horror from the ‘70s and ‘80s.  KLAGGER is part slasher flick, part ghost story, and all myth with the potential to add to our dark patch of the pop cultural quilt a much needed horror icon for modern audiences.

While Crow develops the feature length version of KLAGGER, he continues bringing ideas to fruition with the intent of fostering a thriving, quality indie film environment.  He not only has the tools to make movies with production values that rival those of the major studios, but he shares these tools with other indie filmmakers at a cost consistent with indie budgets.

Ravenous Monster caught up with Casey Crow to find out more about his approach to film making, KLAGGER, and the artists that bring such ideas to life.  Read on, Horror Fans….

Casey Crow:  KLAGGER was born from an idea similar to the myth of Sisyphus. Sisyphus was condemned by ancient Gods to push a rock uphill for eternity. This Greek concept of futility seemed like a great place to start for a horror movie. What if a hard-nosed redneck (Joseph KLAGGER) was killed in a factory accident, went to Hell and fought his way out, only to be trapped in purgatory? Basically, stuck in his job, working forever! I thought that might be an interesting ghost story. So, by way of the Greeks, KLAGGER is just a contemporary version of Sisyphus.

RavMon:  The production values of KLAGGER are exceptional all around, the sound work in particular.  Clocking in at a svelte twelve minutes, the movie bodes well for your potential as a feature filmmaker.  Are shorts the quality of KLAGGER confined in length by budget constraints or are short films what you prefer to make?

CC:  We were able to get a lot of visual mileage from our set which was just an abandoned feed mill. Note to first-time filmmakers and DP’s. If you can’t afford to build sets, find a really interesting looking practical location and make it the centerpiece of your project. The big secret to getting a low budget movie to “look good” is simply choosing people and places that are already visually compelling. Having talented people like our cinematographer (Anthony Gutierrez) and KLAGGER’s sound designer/FX creator (Gene Crow) surely enhanced the productions outcome as well.

Regarding shorts vs. feature films? Short filmmaking can be just as rewarding creatively as doing a 90 minute movie. It depends on what kind of story you are telling. I enjoy both, however, in the case of KLAGGER it was only meant to be a short film, period. Then, we began screening KLAGGER at film festivals and the attendees were telling us “You should make a KLAGGER feature film!” After thinking about it a few months we decided to do just that.

RavMon:  I watched KLAGGER on my Android phone via an app called Popcorn Horror, an awesome app and an interesting way to access indie horror films.  Popcorn Horror was started by Felix Gilfedder, an indie filmmaker from Glasgow, Scotland and his app looks, ostensibly, like a nice system for filmmakers to make their short movies available and earn a little money in the process.  What made you decide to get involved with Popcorn Horror and how has it worked for KLAGGER?

CC:  Popcorn Horror is a really great concept. “A cinema experience in your pocket,” so dubbed by the creator. Who wouldn’t want to be featured on a cutting edge idea like that? It’s a great rendezvous for horror fans.  Felix adds new movies regularly, as well as news about upcoming horror events, films, and horror trivia. The app is great exposure for a film due to its accessibility and it’s cool to read people’s comments on your film as well.

RavMon:  You’re one of the founders of Zallerquad Films.  Could you please explain what that is and how it came to be?

CC:  Zallerquad Films began as four friends who like to make movies. Myself, Sean Hastings, James Nicholls and Lance Hunter Voorhees are the founding members. The Zallerquad is defined as – A gestalt of human creative energy directed toward the realization of visual art. Each member of Zallerquad Films takes a turn at writing and directing a short film project. We are kind-of like a band where each member gets a turn at lead singer.  Zallerquad has produced 4 short films and one industrial during its 8 year existence. 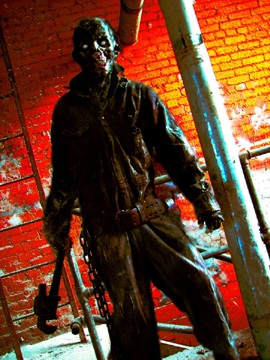 RavMon:  You and your brother Gene have also founded Spectrum Sound FX which provides filmmakers with high quality sound and music for their films.  This seems like an unexploited market, one that’s definitely ripe for the picking.  How did this come to be and has SSFX filled a void in the indie film making market?

CC:  Spectrum Sound FX was the idea of my brother, Gene. He is a digital sound artist and composer. Some of Gene’s work can be seen on YouTube under the pseudonym DAZZLE HIPS. During the making of KLAGGER we began to require a need for high-end sound effects that wouldn’t sound canned or old fashioned and from that, we began to record our own sound effects in HD. SSFX is still in its infancy, but we will start providing low-budget filmmakers with high-quality sound effects and design when our database goes online this fall.

RavMon:  Do you consider yourself a horror filmmaker?

CC:  Do I consider myself a horror filmmaker? Not entirely. My film previous to KLAGGER was a man vs. nature short film entitled TOJENKAWA (on Vimeo) and it was set in the West. However, it does have a shape-shifter character. I’d say I have an interest in dramatic stories that are sprinkled with a bit of magic.

RavMon:  Which stories, regardless of genre or medium, inspired the young Casey Crow to become a story teller?

CC:  I grew up in the 70’s and arguably the best movies of all time were made in that decade. I think most of my inspiration comes from stories that focus on people struggling with nature in some way. JAWS and DELIVERENCE come to mind. Two very different takes on man vs. nature but damn, if those aren’t incredibly watchable stories and inspiring to anyone thinking about making their own movies.

RavMon:  I couldn’t agree more.  Those two films, Jaws in particular, had a profound influence on me as well.  Was there a specific catalyst that made up your mind to pursue filmmaking?

CC:  The basic catalyst drawing me toward filmmaking was the dream-like quality and ability to record an idea/story that begins in one person’s mind.  Then, through a medium of technology and group effort, it becomes a tangible thing of images and sounds that everyone can see. I think in this age of “digital-everything,” we forget that movies themselves are special effects. We are seeing into the mind of an artist. His or her ideas or understanding of the world around them laid bare for the masses.  Hopefully, if the film is working, the viewers share something in common with the artist’s presentation of life. Everyone should make a film, long or short, at some point.

RavMon:  Which films and filmmakers do you emulate or at least admire most?

CC:  Filmmakers I most admire or emulate are the ones who find great stories to tell (long process) and then translate that story into the most visually interesting, emotionally compelling film possible. Stanley Kubrick, John Boorman, and Francis Ford Coppola to name a few. Those guys each have a strong suit but all make films with the highest caliber of story, character and image.

RavMon:  What are you working on currently?

CC:  For the past year, my brother Gene and I have been steadily working to bring the feature-length version of KLAGGER into fruition. We plan to release KLAGGER in the fall of 2013. The short film version of KLAGGER will continue to screen at horror events throughout the year, and will be available for purchase on Amazon.com, shortly. Horror Heads can also follow the KLAGGER film project on Facebook via Joseph Klagger’s profile and the KLAGGER movie Facebook page.

One thought on “Interview with KLAGGER Filmmaker Casey Crow”