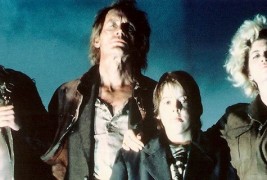 Lots of vampire films have their moment in the sun. But none can cast a shadow like the one left in 1987 by a gem called NEAR DARK, a film that’s been considered a memorable favorite in the eyes of many horror and vampire fans alike. When it came out this movie was briefly mentioned and then it quickly vanished. Now, 25 years later, there are many horror fans out there that have no idea this movie even exists, let alone know it is a vampire flick. Please allow me to explain the film itself, the small run it had, the clash it had with another powerful vampire flick around the same time, some of the actors and crew who went on to achieve great success in later films, obstacles overcome, the attempted remake, and the eventual cult status it’s achieved.

NEAR DARK is about Caleb, a normal country boy, who for better or worse engages in a little girl-boy interlude with a girl named Mae. While making out she bites him on the neck and scampers away. When the sun comes up Caleb feels sick, like he’s burning up. Then he’s kidnapped by a group of roughnecks that Mae hangs out with. They’re revealed to be a group of vampires (the V-word, by the way, is a word that is never mentioned at all in this film).

The motley group consists of the leader, Jesse, a woman named Diamondback, a crazed roughneck named Severen, and a kid named Homer (don’t mispronounce his name!). They want Caleb dead but when they see he’s already turned they decide to see if he wants to be a ruthless killer like they are. Although he has no choice, Caleb’s completely reluctant to become an undead, immortal bloodsucker and his relationship with Mae is at a perilous standstill.  Meanwhile, Caleb’s father and younger sister go on the chase to bring him back home.

Several opportunities for Caleb to have his first kill don’t go right and the group is forced to decide whether or not to kill him. Caleb’s family eventually finds him and rescues him. When they discover the immortal power he possesses, Caleb asks his father to do a blood transfusion on him which successfully turns him back to normal. When the vampiric clan finds out about this, they have his sister kidnapped so Homer can have a mate for himself. Realizing he can do the same thing to Mae and get her out of this nightmare, Caleb is now forced to battle the undead bloodsuckers to get his sister back and to save the life of the girl he loves.

Now people are going to ask, how did this movie nearly become forgotten? There are a few reasons as to how this happened. First of all, NEAR DARK came out three months after THE LOST BOYS was released. THE LOST BOYS enjoyed a much bigger box-office intake, leaving NEAR DARK in the shadows. That movie also had a more well-known cast at the time including Corey Feldman, Corey Haim, and Dianne Wiest, to name a few.  And its publicity was better, having been released by Warner Bros., a more well-known film company. Secondly, NEAR DARK was released by DeLaurentiis Entertainment Group, or DEG. This was a low-budget company that distributed many films, including classic cult films like EVIL DEAD II and MAXIMUM OVERDRIVE. At the time of NEAR DARK’s release, DEG was suffering from major financial problems, since most of their films were not profitable hits. NEAR DARK was one of those and it made back only a paltry $3.36 million out of its $5 million budget. Compare that to the $32.2 million THE LOST BOYS raked in and you get the idea.

DEG went bankrupt in 1989 and was bought by another distribution company. Despite the low box-office intake, the critical reaction to NEAR DARK was mostly positive. Some critics especially liked how the movie blended the western and the horror film together. On RottenTomatoes.com it’s ranked in the Top 100 Horror Movies list. The movie’s popularity started to slowly grow through subsequent video rentals, DVD, and Blu-Ray sales. Another possible reason why this movie didn’t get as much attention as it deserved was that it had a more serious tone than THE LOST BOYS did. THE LOST BOYS acted perfectly as an audience-grabbing horror-comedy. NEAR DARK is much darker and puts a greater emphasis on the characters, generating empathy with their pain and suffering.

Even though NEAR DARK didn’t have a well-known cast and crew, most of their subsequent works made them famous. NEAR DARK was directed by Kathryn Bigelow. She would later go on to be the first female to take the Best Director trophy at the Academy Awards for THE HURT LOCKER in 2010, which won the Best Picture trophy, as well. Lance Henriksen (Jesse), Jenette Goldstein (Diamondback), and Bill Paxton (Severen) all appeared in the 1986 blockbuster thriller ALIENS by director James Cameron. He was married at one point to Kathryn Bigelow. They went on to work on a couple of films together such as POINT BREAK and STRANGE DAYS. Eric Red, who wrote NEAR DARK, worked on the 1986 thriller THE HITCHER with Rutger Hauer. He also wrote and directed the 1991 thriller BODY PARTS starring Jeff Fahey. Joshua John Miller (Homer) is half-brother to actor Jason Patric, who happened to appear in the THE LOST BOYS. Jenette Goldstein and Bill Paxton are both James Cameron regulars, as they’ve appeared in other films of his, besides Aliens. Jenette Goldstein appeared in both TERMINATOR 2: JUDGEMENT DAY and TITANTIC. Bill Paxton worked on THE TERMINATOR, TRUE LIES, TITANTIC, and the Titanic documentary film, GHOSTS OF THE ABYSS.

Another aspect that has arisen since the revival of NEAR DARK was a plan to remake the film for a new generation of moviegoers. In 2008, a remake was lined up for NEAR DARK by Platinum Dunes, which put out the remakes for THE TEXAS CHAINSAW MASSACRE and FRIDAY THE 13TH. The project was put on hold when TWILIGHT was released that year. TWILIGHT shared (more like borrowed from) a lot of aspects with NEAR DARK as well as THE LOST BOYS – the lead character sparks a romance with somebody who turns out to be a vampire, is nearly forced against their will to join the vampire’s group, the protagonist is inevitably forced to make a decision: either join the clan or destroy the creatures without damaging their loved ones.

The filmmakers chose to put the project on hold because of the success TWILIGHT had in attracting younger audiences with its PG-13 rating. The filmmakers intended to make NEAR DARK a gritty, R-rated, sexier version of TWILIGHT, but those similarities between the two films forced the project off the table, for now. It doesn’t mean the movie won’t be made. It most likely will begin production again after the TWILIGHT craze slows down a bit.

Twenty-five years after its release, NEAR DARK is a one-of-a-kind vampire movie. It did bomb and was nearly forgotten, but positive critical reviews and a slow and steady increase in popularity led it to the cult success it currently enjoys. Even though it didn’t have as memorable of a cast as THE LOST BOYS did at the time, most of NEAR DARK’s cast and crew have gone on to have huge careers. This movie and THE LOST BOYS have become major influences on later vampire films. Will a remake ever be made? That question is yet to be answered. The movie is slowly coming in to the broader cultural awareness after many years of hiding in the dark. Now it’s considered to be not only one of the best horror films of its kind but one of the best ever made. This gem of a vampire flick casts a huge shadow, even when it’s near dark!

One thought on “25 Years after Near Dark: A Retrospective”