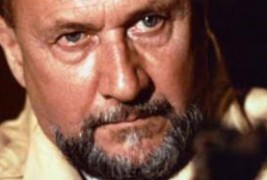 Originally this second edition was going to focus on characters who were “doctors by day and monster hunters by night,” and I did a lot of research into potential candidates that met that criteria, but I soon found that there were a lot more doctor heroes who could easily fall under this umbrella of “monster hunter,” than I had first realized. There were doctors who fought killer aliens, put down mutated animals, battled plagues, slain vampires, shot down werewolves, banished ghosts and cast demons asunder from the souls of the possessed. There were even doctors who were monsters themselves who fought other monsters like Hannibal Lector for example. 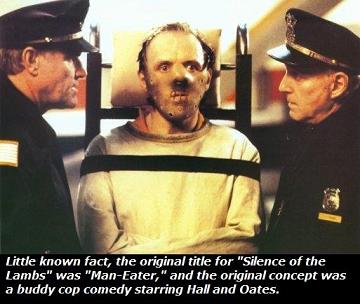 I got so desperate that I even thought of coming up with some kind of moronic award system to give characters I liked honorary PhDs or MDs for their “accomplishments in their respective fields” meaning that if they did something extraordinarily good or bad on screen I’d make them a doctor of heroism or buffoonery. My thinking was that since I damned most of the characters I reviewed in the first Deadly Doctors, maybe I could make up for it by awarding doctorates in the study of bad-assery to characters like Ash from Evil Dead 2.  But who am I to give such accolades? I’m not the head of any kind of institution. Hell, I don’t even have a degree (what a shocker, right?) and, besides, Ash worked house wares by day and fought against evil at night. As badass as his accomplishments were, a pointless PhD from me wouldn’t really make him the right fit for DD2 (or Deadly Doctors Dos, as I like to call it).

What I was looking for was more of a horror movie doctor avenger. Someone fighting for the force of good, who could go round for round with the most terrifying abominations ever born, and who wasn’t just fighting the good fight because they were put in a bad situation, but because they were somehow tragically responsible for the evil that victimized the other characters on screen. The doctors I needed had to be out to vanquish evil and right a wrong even if they couldn’t admit that they caused it.  They must willingly risk their lives and their sanity in the process as they brave the horror and walk into the darkness.  They must do this thankless, harrowing job even if it means getting lost forever in the tormenting futility of a real life reoccurring nightmare.

I needed someone, without any further ado, like Doctor Sam Loomis, the character who set a new standard for the stock hero in horror. He isn’t you’re typical detective on the case of a killer, he isn’t a tough guy out to save his girl, he’s a mad man psychiatrist who was responsible (more than you might fully realize) for the creation of that monstrous, master of massacre: Michael Myers.

Out of all the character lists I was formulating, Doctor Loomis always seemed to pop up in any equation I tried to compute for the solution of a comprehensive review. He’s an iconic horror movie character played by one of the most talented personality actors from the 60’s and 70’s (which is the best era for film) and he lasted five rounds with Michael Myers, so he was going to make it onto some kind of list.

In fact, he’s the very character who inspired this little series of mine that I’m now struggling to keep on life support, and it wasn’t until I read fellow RavMon contributor Bryan J. Pasquale’s article on Halloween — “Michael Myers: The Ultimate Boogey Man (I highly recommend it if you’re a Halloween fan)” that I realized Loomis was too big to be looped into any order on any of my silly lists. He deserved his own spotlight, so if you want to get mad at someone for this blog, hurl your insults at Bryan for inspiring it.

After reading Pasquale’s article, I thought things over and revisited the original Halloween series and without trying, I began to focus solely on Loomis. In all the Myers films, Loomis always seems to make me laugh or at least smile, not because the character, or how Donald Pleasence portrays the character, is all that ridiculous, quite to the contrary. It was Donald Pleasence’s personality, his natural manic energy and the instinctive talent he possessed to know exactly how to channel that wild energy into his lines that made Loomis so unique and fun to watch on screen.

With little effort, Pleasence’s voice made the words he was delivering during emotionally charged moments seem to almost burst straight from his eyes to yours—connecting you instantly with Loomis’ frustration and despair.  He could make that natural maniac charisma seethe and simmer under lines to give them more of a haunting resonance as if Loomis had lived out the nightmare of Myers a dozen times and was simply talking to himself in the dark. 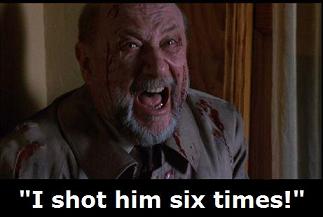 What’s even more fascinating about Pleasence’s portrayal of the Loomis character in all the Halloween films is that he simply did it for money. According to an interview with Pleasence on the set of Halloween 4: The Return of Michael Myers (Fangoria issue 80), he claimed that he continued to take the part to pay the bills. He was a professional actor that would simply get the part, read the script, and if he decided to take the role he learned the lines. He had no approach. No artsy explanations as to how he could act. 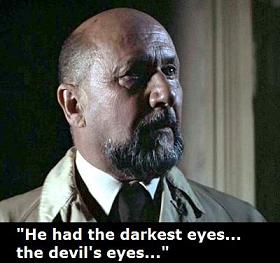 He just did what he did best and for the bald Englishmen that was giving mad men a dramatic voice.  When you watch Pleasence you aren’t just watching Dr. Loomis or James Bond’s greatest nemesis (Ernst Blofeld in You Only Live Twice) or some jabbering lunatic in a white void (Sen from THX 1138), but rather you are truly hearing these characters speak through Pleasence’s voice, and his voice plays so well upon the theater of the mind which makes his characters stand out more distinctly from the others on the screen.

And it was his knack for making crazy characters sound unique that piqued the interest of John Carpenter – the man responsible for introducing Pleasence and his voice to a new generation of viewers in the 70’s and well into the 80’s. Carpenter claimed to enjoy casting Pleasance against his type like in such roles including the President in Escape from New York, the Priest in Prince of Darkness and, of course, as Loomis in the first Halloween, but I believe Carpenter was wanting to do more than show Pleasence’s vocal versatility.  I think Carpenter wanted Pleasence’s mad man charm to make the danger and desperation of the situation more palpable in the story of Halloween.

Loomis is the bard, spreading the legend of the boogey man, and through his words with the aid of Pleasence’s voice to carry them deep into your mind, you sit with eyes affixed and ears keen to the screen anxious to find out what type of terror Myers is going to release upon Haddonfield. It’s a clever device to build suspense, and a clever twist on the stock hero character. Loomis isn’t a beacon of all things that are good and honest in the world, he’s a shamed doctor forced to cover his ass because his only patient is on a killing spree. That’s a malpractice law suit and a PR nightmare for Smith’s Grove Sanitarium.

Sometimes it’s fun to think about Halloween as less of a horror story about a maniac boogey man and more of a horror story about one of the worst psychiatrists in history. Loomis knew about the type of evil that was hidden inside Myers, and he knew exactly what ol’ Mikey was capable of doing if he ever got out (Here’s an interesting deleted scene in reference to that: www.youtube.com/watch?v=738Hk7fWpqw) and to make matters worse, after Michael escapes, Loomis keeps everything quiet. He tells the police not to issue a warning of any kind on the radio or local news claiming that reporting that a killer is loose will cause panic and people will see Myers on every street corner.

Good! Start a panic! Tell people to lock their doors and hide under their beds because there’s a killer on the streets of their town roaming amongst their trick-or-treating children. “They’ll see him on every corner,” Loomis said. GOOD! That means they would have been looking for him. Maybe if people had been hysterically searching every street and peering around every corner the carnage could have been prevented, and I think, given the context of the story and the character’s back ground, that Loomis didn’t want to draw attention to Myers at first because the only thing he was really out to save was his career as a psychiatrist.  If he and the sheriff’s department could quietly apprehend Myers, Loomis could try to sneak him back into the mental institution without incident and say, “Oh he was right around the corner the whole time. Nothing to worry about.  No problem at all.”

Then again, Loomis does such a bad job handling the situation that it makes you wonder if he and Myers were somehow in cahoots. Perhaps, Loomis let Myers escape as some kind of radical psycho-therapy — a last stitch effort to snap Michael out of his madness, sort of like what Ben Kingsley put DiCaprio’s character through in Shutter Island. Whatever the case may be, over the course of two days (the start of Halloween and the end of Halloween II) the insanity begins when Myers springs from the booby hatch and ends with 16 deaths and Loomis blowing up a hospital ward. 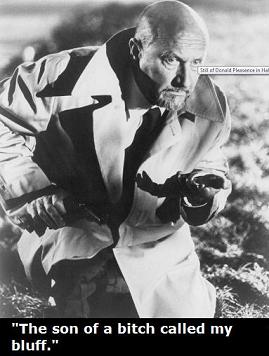 That’s the difference between Loomis and other psychiatrists. Most psychiatrists and therapist aim to help you arrive at your own solutions as to what’s causing your worries and doubts, to point you in the right direction towards the answers to those problems that lie deep within yourself.  Loomis used a gun. 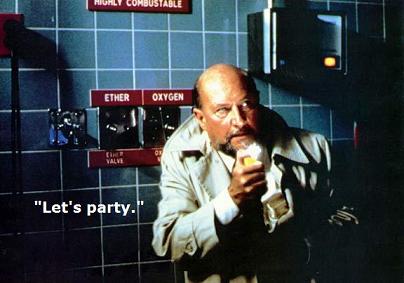 And whatever his motives, the little bald English man with a crazy voice went toe to toe with one of the craziest killers in horror history. It wasn’t a graceful fight and in many respects he was pulverized, but he hung in there until the final bell, and beyond that Dr. Sam Loomis was more than just a man up against unspeakable evil and unbeatable odds.  He was the one who painted the picture of Myers for us when we watched Halloween for the first time. He riled our senses and tried to prepare us for the horror we were about to face, so that when we first hear that infamous 5/4 synthesizer tempo we’re all alongside Loomis in some way (whether he’s on screen or not), desperately, blindly searching for the boogey man in the night, hoping to stop him or to at least catch a glimpse of what he might do to his next victim.

Next Deadly Doctors: Veterinarians of the Vicious and the Voracious!