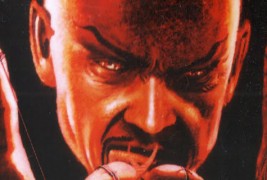 I recently watched Disney’s PETER PAN again for the first time in a long while. I could tell you that this was because there’s a 3 ½-year old in my life, but that would be a lie. My robust knowledge of the intricacies and mythology of the DORA THE EXPLORER-verse, however, is another story.

But back to PETER PAN. There are things you pick up on as an adult that you never would have as a child. For instance, that PETER PAN (the movie, not the character) really kind of sucks in a lot of ways. Peter is a jerk, Tinkerbell is a bitch, and Wendy is a doormat (someone needs to buy her a copy of THE SECOND SEX and stat). But it’s a kid’s movie, so really you can excuse a lot of that. But then I got to the scene where we meet the, ahem, Redskins, and holy cow, um, RACIST! Hollywood in the 50s wasn’t known for its cultural or racial sensitivity, but still. It’s no SONG OF THE SOUTH (which isn’t on DVD why again? Oh, yeah), but it’s some inescapably racist shit.

Which brings us to THE HAND OF FU-MANCHU by Sax Rohmer (re-issued by Titan Books). HAND, published in 1917, was the third of the Fu Manchu books, and the last one for 14 years. Each of the first three books follows a roughly similar pattern, in that they’re episodic and feature the redoubtable Nayland Smith as a sort of proto-James Bond type, and his trusty sidekick (and chronicler of his deeds) Dr. Petrie. Smith and Petrie battle the insidious forces of the titular Dr. Fu Manchu, who is a criminal mastermind bent on the takeover of the world. Which, frankly, is what I like to see in my criminal masterminds. If you’re gonna be a criminal mastermind, aim big, I say. Fu Manchu employs Thuggees and dacoits and other things that will send you racing to Wikipedia for definitions as his weapons, but they can basically be boiled down to people and devices and poisons and reptiles and more from the entirety of the Asian continent.

Smith and Petrie owe a clear debt to Sherlock Holmes and Dr. John Watson, with Fu Manchu as their Dr. Moriarty. Smith and Petrie are pretty pale imitations, but they’d have to be – especially Smith – since Holmes is one of THE iconic figures in all of literature. The biggest difference, though, is that Sherlock Holmes was always the most fascinating character in any of his stories, whereas Nayland Smith and Petrie are each dull, dull, dull; it’s Fu Manchu who really intrigues. We’re constantly told, on nearly every page, how brilliant he is (as well as how evil). And when we see him, however fleetingly, he makes more of an impression than the stiff-upper-lip dullards at the center of the book. There’s a reason, perhaps, that his name is in the title, and that he’s remembered while Smith and Petrie are justly forgotten. Part of the reason, too, is that Fu Manchu remains in the shadows, and therefore mysterious. In the case of Nayland Smith and Petrie, familiarity breeds, at least in this case, a case of the doldrums.

This book is essentially a precursor to the pulps of the 20s and beyond that gave voice to such authors as H.P. Lovecraft and Dashiell Hammett. Viewed through that prism, Rohmer’s book is more than acceptable. He builds suspense well, has agreeably corny plotline and twists, and never treats the characters as anything more than puppets to make the plot move. If the book doesn’t reach the heights of a Lovecraft or a Hammett, so what? Few works do. Think of HAND OF FU MANCHU as the literary equivalent to the movie serials of the 30s and early 40s. It’s popcorn reading, if there is such a thing, that makes no demands on its readers and just strives to entertain.

And entertain it does, in an ephemeral, fleeting sort of way. The book opens with Nayland Smith and Petrie believing that the dread Doctor died in the previous book, but the need for vigilance is no less, since Fu Manchu was the head of a worldwide criminal conspiracy that continues to plot the takeover of the world. Of course he’s not dead, and the best and most entertaining of the episodes sees Dr. Petrie kidnapped by the Doctor’s forces to assist in an operation. Following the orders of the still-conscious Fu Manchu, Petrie assists another doctor remove the remnants of a bullet in Fu Manchu’s brain. Needless to say the operation is successful, and Fu Manchu lives to menace another day.

In Fu Manchu you see the beginnings of countless other supervillains, from Ming the Merciless to Dr. No and beyond. It’s not a reach to say that Ian Fleming based the very idea of Bond villains on Rohmer’s creation. So why, then, aren’t these books more famous? Why haven’t Fu Manchu adaptions filled up television screens and multiplexes like Conan Doyle’s Sherlock Holmes has? To put it bluntly, this is some despicably, incredibly racist stuff. I mean, wow.

You can almost literally open the book to any page and see an example of old school beyond-the pale-racism. This was the era of the so-called “Yellow Peril,” which was the fear that the influx of Asians into parts of the US and Great Britain threatened the “white” way of life. Which, yeah. Rohmer even describes Fu Manchu, in the first of the books, as “having a face like Satan … the yellow peril incarnate in one man.” It’s so over-the-top that it almost reads as a parody of late-Victorian/early post-Victorian attitudes.

Regardless, these attitudes can make it exceedingly difficult for a modern audience to appreciate the book, even as a disposable remnant of another era. If you can get past it, the book can be a blast in a fun, cheesy sort of way. But if you can’t – and there were times that I couldn’t – it can be a bit of a slog.

Full disclosure forces me to say that Fu Manchu is clean-shaven in this book, so if you pick it up hoping for some grooming tips for your groovy 70s mustache, you’ll have to look elsewhere.