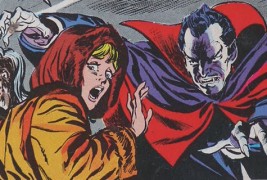 Horror has been around for quite some time and in many forms. Primarily, you will see such works of art in the theatre, on video, or in literature. An oft overlooked medium of horror is the comic book. Horror comics have been around nearly as long as the movies and peaked in popularity between 1940 and the mid 1950s. That’s when it all changed.

The books were getting too gruesome by 50’s standards, hence in 1954 everyone’s favorite nemesis, Censorship, came along in the form of the Comics Code Authority (CCA). Even though it was not a government sanctioned organization, comic publishers used the CCA to set standards for their titles and content. Thus, the CCA placed a ban on horror comics and forced publishers like DC, Marvel, and EC (Educational Comics) to change their methods. Honestly, I would be totally fine with my son reading Tales from the Crypt on the playground. Apparently, others don’t share the same feelings as me.

In the 70s, the CCA lifted the ban and became more lenient on what types of horror comics could be produced. In 1971, Marvel introduced a vampire-like character to test the waters on this new latitude they were given which lead to the introduction of Dr. Michael Morbius, the Living Vampire (Morbius became quite the popular character and will be written about in the future so stay tuned!). Just one final note about the CCA; in 2011, comic publishers discontinued using their services. It looks like horror prevailed in that battle. We can all thank Archie Comics for delivering the coup de gras since they were the last ones to leave, rendering the CCA defunct.

In 1972, my personal favorite horror comic debuted from Marvel (even though I wasn’t alive to collect it). Enter the Tomb of Dracula. This series was penciled by Gene Coleman and struggled to find a dedicated writer until issue number seven when Marv Wolfman became their guy. I would mention the inker, but taking a note from Chasing Amy, “who really cares about a tracer, anyway?”

The series ran from 1972-1979 and produced 70 issues as well as 5 giant size companions. I have heard rumors of issues 71 and 72, but supposedly, they were scrapped at the last minute. This is another series that I’m heavily coveting for my personal collection. I currently own issues 1 and 18. To actually read the series without emptying my life savings, I purchased the trade paperback versions of the story.

The antagonist (or protagonist if you’re like me), is Count Dracula. Originally thought to have been killed by Van Helsing and left to rot in his castle, Vlad Tepes is reawakened by an unsuspecting rube who removes the stake placed by the famous vampire hunter. Once the stake is removed, Dracula becomes flesh and bone again, and all Hell breaks loose. I could give you more of the plot synopsis, but then you’d have no reason to seek out the amazing collections to explore for yourself. By all means, STAY AWAY FROM WIKIPEDIA!! Don’t spoil the fun for yourselves. This is a great comic for all horror fans.

Let’s do a roll call on the cast of Dracula’s rogues’ gallery: Rachel Van Helsing, granddaughter of Abraham himself; Frank Drake, a descendant of Dracula and the one who inherited his castle; Quincy Harker, son of Jonathan and Mina; and my personal favorite, Blade. That’s right! Blade got his start in Tomb of Dracula issue 10. They explain his origin in a later book, which also has an appearance by the vampire who bit Blade’s mother, Deacon Frost. Did you think the movie producers pulled that name out of a hat? Another character used in the movie franchise that got his start in the Dracula comics was Hannibal King. In case you forgot, he was the wisecracking, ex-vampire played by Ryan Reynolds. Throughout Drac’s time in the Marvel Comics world, he also crosses paths with the likes of Werewolf by Night, The X-Men, Spider-Man, and Dr. Strange.

All in all, this is a fantastic collection of horror comics that no macabre junkie should go without reading at least once. If you’re not into comics, hey, that’s your prerogative. For those who are, I would like to make this suggestion: If you are in fact a collector and have archives of comics, it might be worth your while to try and locate all 70 issues of Tomb of Dracula. They can be a pretty expensive commodity on eBay and most of them sell for no less than $12/issue.

If you wish to save your money, you can purchase the Marvel Essentials: Tomb of Dracula Volumes 1-4 which contain all 70 books as well as some additional appearances in crossover issues. The Essentials books are in black and white so keep that in mind too. In 2010, Marvel released color versions of the books but did not complete the set. I can’t tell you the reason why they never finished them, so your best bet might be to go the black and white route here. If you decide to journey down this path of darkness, you’ve been warned — you might actually add another drug to your horror addiction!