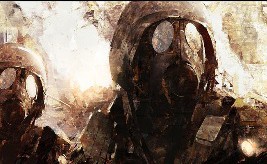 For all you mutant loving, post apocalyptic pondering, survivalist zombie fans out there, The Killing Floor is one of the few books you’ll want to take with you down into your bomb shelters and not want to scrap for fire kindling. When you begin reading the story, you might think that it’s just another zombie war book, but don’t let your senses deceive you. Follow your instincts and you’ll be happy you decided to keep moving with the band of survivalists as they fight to reclaim America from the scores of monsters and mutated undead.

This is Book Two of author Craig DiLouie’s ongoing postapocalyptic series. Book one, The Infection, is a character driven yarn that basically details the first battle that sparks the full scale war.  DiLouie’s account has all the detail of a modern day history text book combined with all the excitement of a blockbuster action movie.  You don’t have to read book one to enjoy The Killing Floor (but it doesn’t hurt).

The Killing Floor picks up after one of the first book’s major battles in which survivors of one of the few thriving refugee camps in America (Camp Defiance) band together to attempt to take out a main bridge that keeps funneling mutants and monsters onto their side of the river.  And please note that even though this story is a lot like a World War Z it’s written more like a modern day War of the Worlds with cannibal maniacs who are fueled by an unknown and possibly alien virus.  These zombies are not hordes of moaning stiffs, they’re infected by a conscious virus using humans as pawns to carry out one  simple set of a commands to insure total global domination: “Attack, overpower, infect.”

This story is not about man versus zombie; it’s about the human animal trying to survive against an alien animal; a war for earth during which the aliens play dirty by turning loved ones against one another to spread their infection in an effort to propagate their race.  This happened in phases all of which are detailed in the prologue which lays out the basics of what went down in The Infection. First there was a pandemic in the “Time Before [there were mutants and undead]”  It was called the “Falling Down” and “The Screaming”by the people who survived when scores of people instantly slipped into comas before awaking as violent cannibal maniacs.

The Killing Floor begins with the story of Ray Young, a booze hound loser from the “Time Before” who was left for dead after a major battle at the Veteran’s Memorial Bridge where a group of survivors tried to stop a horde of thousands of undead from crossing the Ohio River into the southwestern Pennsylvania territory of the aforementioned refugee camp known as Femaville or Camp Defiance. Ray is left behind after the battle when he’s stung by a “hopper,” a sickly, demonic ape with grasshopper legs and a scorpion stinger tale and one of the many grotesque monsters in this post apocalyptic world.

The hopper’s sting implanted the egg of a parasitic mutant fetus that’s been feeding off Ray’s body and growing like a tumor on his ribs ever since. With this alien mutant growing inside of him, Ray manages to make it to a house in a nearby abandoned neighborhood so he can die with some dignity in an actual bed. Luckily, he finds some warm beer to choke down while he smokes his last pack of cigarettes before drifting off into a coma. Two weeks later, he awakens unchanged by the infection with the fetus half dead in his body. He makes his way back to the Camp Defiance just as it becomes plagued with a new outbreak of infection.

At the same time, a PTA president turned ruthless, scar-faced assassin named Anne Leary comes upon Camp Defiance after returning from one of her scavenging expeditions with Anne’s Rangers, a band of scavengers/undead killers that she leads.  Anne discovers Ray running from the undead horde through her binoculars. She remembers Ray from the battle at the Memorial Bridge and blames him for the outbreak that’s taken down Camp Defiance—vowing to hunt him down and stop him from reaching any of the other refugee camps to infect others.

News of Camp Defiance spreads to another militia group who calls themselves The New Liberty Army (NLA).  They’re awaiting supplies from Washington to help in their ongoing extermination of the infected as the U.S. military mounts a major offensive to take back Washington D.C. from the undead to turn the tide of the war in their favor. The NLA is headed by former army sergeant Toby Wilson, known simply as “Sarge”, and his girlfriend Wendy, a former Pittsburgh cop and a real looker.  They, with the help of a few wild men and the use of a Bradley tank (that Sarge commandeered), decide to fight their way to Washington to join in the fight for the capital.

While the NLA fights on to Washington, and Anne Leary hunts down Ray Young, Dr. Travis Price, one of the few scientists who made it underground with the President before the White House was overrun by the undead, gets the attention of a few top ranking generals.  Dr. Price presents the generals with a theory that if a pure sample of “The Wildfire Agent” – the cause of the virus – can be obtained, there’s a chance that a vaccine or cure could be made. This prompts the generals to disclose classified footage of Ray Young from surveillance video at Camp Defiance. They don’t know who Ray Young is or precisely which direction he could be headed in, but from the video it’s noticeable that he’s not infected and the undead aren’t going after him. There’s a chance that Ray Young is “Patient Zero”, so they give Dr. Price an ultimatum: Go out with a recon team, find patient zero, and bring back a cure…or don’t come back at all.

There’s a great twist involving the Ray Young/patient zero angle that you may not see coming, and the ways in which the characters come together are beautifully crafted, culminating in a suspenseful climax. What I can say without spoiling anything, is that beyond the plot revolving around the war and the hunt for Ray Young, there are several character subplots that are woven into the story seamlessly showing the drama of each group of characters in thorough detail.

You spend time as one of the avengers of the road with the NLA militia – a group that’s split three ways between the wild men who don’t want to go to Washington, the young military officer Lt. Chase from Washington who’s desperate to get every available man to join in the war effort, and Wendy and Sarge who are wanting to retire from the fight and find a place to hide away from all the evil in the world. You spend time as one of the survivors stuck with Anne Leary as her rangers try to talk sense into her while she’s on the hunt for Ray Young with reckless abandon, or you’re with Dr. Price who’s being held at gun point by a trigger happy agent of the government that hates Price for his cowardice and is just waiting for any excuse to blow his brains out.

This review barely scratches the surface of the world DiLouie has created for his postapocalyptic series. There are too many good characters in this story to name them all or describe how they effectively contribute to this action-packed story about the human animal trying to survive against the ever-mutating and relentless undead.

The Killing Floor is like five zombie apocalypse stories wrapped up into one and author Craig DiLouie does a great job of keeping the story suspenseful and thrilling by having chapters anchored from different characters’ points of view giving the reader various glimpses of the undead ravaged world. It’s as if the zombie infested world itself is a character that people talk about instead of simply just a setting or a background.  It swallows readers into the atmosphere of the story and plays through the characters interconnected narratives. It’s like The Walking Dead with the action and monsters of a Left for Dead or Resident Evil video game. Not only do you have maniac-rage-virus type zombies (who eat humans out of the necessity to survive but prefer to eat children and prepubescent teens for their nutrient rich protein!) but you also have grotesqueries like screaming gaggles of tentacle monsters, two headed worms the size of cars with mouths of razor fangs, and giant demons like the balrog from The Lord of the Rings that can strike at any time.

If you’re into the postapocalypse genre and you have a Nook get this book.  If you have a Kindle tie it to your e-bindle and hope that your spirits don’t dwindle about the plight of humanity trying to survive the infection and the savagery.  You’ll relish walking the line between man and monster as you enter The Killing Floor.

Title: The Killing Floor (a novel of The Infection)