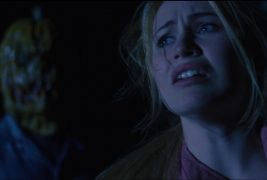 Horrorween is just a few days away, and I don’t know about you, but this is my favorite time of the year. Now that my family and I have relocated from the Hellmouth (aka Florida) to the Midwest for a bit, we finally get the opportunity to experience what a “real” Halloween looks and feels like, and we’re thrilled about it! I decided to watch an appropriately titled film from High Octane Pictures simply called, Pumpkins. I watched this as I was carving pumpkins with the kiddos, so stick around to find out if it inspired me to carve super spooky faces into them…or if it left me feeling like sticking the knife into my own eyes.

So, Pumpkins starts off by giving us a creepy enough intro. The opening credits roll while we’re treated to some sights of Halloween on an isolated-looking farm. There are plenty of spooky skulls and smiling skeletons hanging from trees and a few warnings of ‘KEEP OUT’ posted on barn doors and around the property. It’s nothing new, but along with the score that accompanies these scenes, it all works to set the atmosphere that we horror fans enjoy.

Once the title screen appears and disappears, we meet our cast of characters. There’s an elderly pumpkin farmer and his niece, Shelly (Maria Lee Metheringham). They engage in a bit of conversation while she’s injecting some kind of fertilizer into the soil of a small pumpkin patch that’s in front of their house. Oddly, the farmer fella is missing an eye and his teeth are kind of spaced out and crooked. Can any of you guess where this is heading yet?

Moving on, the ol’ guy goes outside to eat dinner while talking to the pumpkins we saw earlier. He’s pretty happy as he eats while lovingly talking to his pumpkins about the good time that they’re going to have together. While this goes on, the score changes to alert us of the arrival of a couple of random landowner-hating thugs who are clearly up to no good. These two guys have a conversation that kind of informs us that there’s some kind of beef between them and the pumpkin farmer that has to do with a stick being thrown over the fence of the pumpkin patch. There’s still more conversing between the thugs about how they’re going to teach the farmer about respect.

As expected, the farmer and the thugs have their encounter, but not a lot happens. Cut to the next scene where the farmer comes outside with his vat of fertilizer to squirt into the ground, when he’s met with a scene of absolute terror. Someone has vandalized his precious pumpkins by drawing faces on them!! Farmer Guy (we never learn his name) is heartbroken over his “babies” and winds up having a heart attack and dying from his grief. Hang on…naturally, he has to fall into a puddle of the goo, which not only soaks into the soil, but also into the farmer’s lifeless body while more pumpkins watch from a distance. Now, this happens early in the day.

Eventually, Shelly notices that her uncle has gone missing and takes off to look for him in the dark, because that’s always a good idea. Not surprisingly, the two thugs from earlier are seen sneaking around on the farm and are busted by Shelly…and her uncle, who has returned to life as a gigantic, pumpkin-headed monster (Will Metheringham) that’s out for blood and revenge! Are you scared yet?

From this point on, Pumpkins is just a wash-rinse-repeat mess of a wannabe slasher movie. There’s no real story or explanation as to why things happen. The acting is pretty horrible and the strong accents of the actors are pretty hard to understand. If you decide to watch Pumpkins for yourself, you’ll either have to turn on the captions or turn the volume up in order to follow along with what’s being said. The scare, gore and the effects are all about as basic as can be. I went in really wanting to enjoy some new Halloween horror, but this just left me disappointed. I think the writers of Pumpkins (Maria Lee Metheringham/Will Metheringham) could have done a lot more work with the material, but they just…didn’t. However, they did think to include a post-credit scene that tries to lead to something. It’s worth a watch just for shits and giggles, I suppose.

Anyway, if you want to check out Pumpkins, you can currently rent it on Amazon Prime for $3.99. If you do give it a viewing, let me know your thoughts on it.

Have a Happy Halloween, guys!!