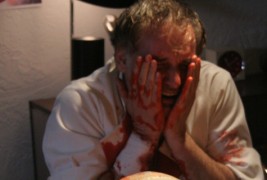 Early success in Hollywood, whether for child actors or one-hit wonders, leads more often to ostracism than Oscars.

Take the case of Alan Miller. Here’s a self-professed Shakespearian actor whose career has been stuck in reverse for 20 years. Is he waiting tables? No, he’s simply growing more bitter with every passing day, even as he maintains the facade of success by auditioning for assorted roles while living in his deceased mother’s Hollywood Hills home.

He lives his life in front of the camera, whether through video cams at home or with the handheld units he uses while stalking young women.

Ably played by Daniel O’Meara, Alan’s psychosis is on full display in Deadly Famous, written and directed by Jim Lane and Eric Troop. He passes himself off to wannabe actresses as a director/scriptwriter/actor, all while teetering on the brink of insanity.

Brink? No, no, no. He long ago fell off the teeter-totter, as evidenced by the opening scene, a brutal head-smashing attack on his first victim.

Enter the beautiful blond ingénue Pamela (Jackie Moore), who has everything Hollywood demands short of experience. Alan sees her as his protégée … and sex object. Pamela, conversely, views Alan merely as a friend, and a strange one at that. Why demean her first successful gig on a soap opera?

It’s because apart from being horribly demented, Alan’s also a narcissist. He doesn’t understand why success eludes a man of his talents.

Sooooooo, others must pay. A succession of victims fall prey to Alan, and it isn’t pretty. Some he picks up on the streets; some are lured to his home to “read lines” — more like reading their epitaph. 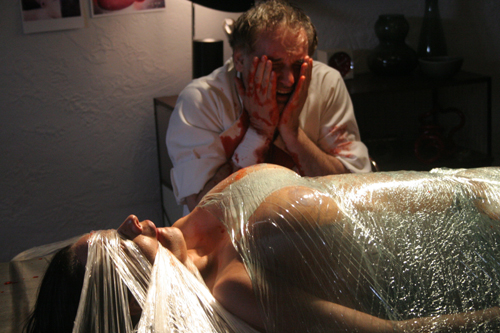 Even Alan’s sister Abigail (Stephanie Jones), who threatens to sell the family home, loses her head as a consequence. And pity the poor woman who’s kept alive temporarily to plump up her liver. Then there’s casting agent Rhonda, smartly played by a feisty Tiffany Adams, who finds herself not so much at the end of her wits as at the end of a rope.

Yeah, this is one sick serial killer.

It all builds to a confrontation with Pamela and her boyfriend/acting compatriot Seth (Brett R. Miller). Neither fare well, though Pamela manages to escape with her life, if not much of her face.

Deadly Famous does a good job of capturing the underbelly of Hollywood. Directors Lane and Troop deserve credit not just for that, but for assembling a better-than-average cast for what is clearly a low-budget film — though one with pretty decent production values.

There are two bit parts in this that deserve special mention. Anthony Powers plays Alan’s frustrated, somewhat bemused agent Morry Gold. He nails the agent persona — the smarminess, the smirk, the sarcasm. And then there’s Eric Roberts — yes, THE Eric Roberts, playing himself — who pops in twice for a nanosecond or so as Alan’s acting friend. He’s a self-described “coke-whore” who makes the most of his time on screen as only Mr. Roberts can. It’s a loud performance … and dead on the money.

Now, don’t mistake Deadly Famous as award-winning material. But if you want to burn a couple hours watching a decently written, nicely acted, compellingly creepy thriller, you could do worse. 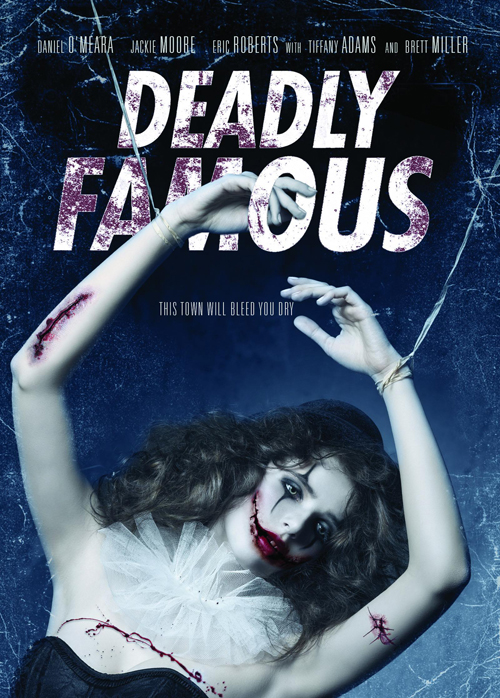